But federal authorities ruined their probe's credibility from the outset by relying on prosecutors implicated in the nation's two most notorious public corruption investigations of the last decade.

The story below describes a fiasco by the Justice Department, which has selectively ignored serious allegations of wrongdoing by top Alabamans, most notably by current Gov. Bob Riley and other so-called "anti-gambling" politicians and their supporters. 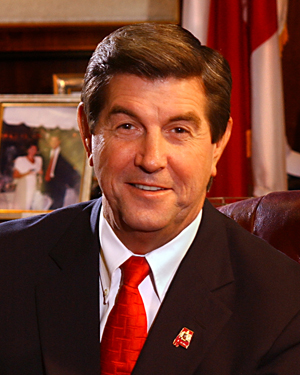 A likely 2012 Republican presidential candidate, Riley, above, has been harshly attacked on ethics grounds for many years, including by some in his own party. He helped initiate the current indictment by closing Alabama's casinos. This pleases both his anti-gambling constituents, and also his past Mississippi funders who want Alabama gamblers to keep streaming into their casinos.

Those arrested included the regional powerbroker Milton McGregor, gambling entrepreneur Ronald Gilley, their lobbyists and the four state senators (two of them Democrats) accused of multi-millions in bribes and promises.

Yet the 100,000-employee DOJ is using prosecutors who separately helped railroad former Alabama Gov. Don Siegelman and the late Alaskan Sen. Ted Stevens, albeit with no DOJ internal finding so far of wrongdoing years after their convictions.

Alabama legal commentator Roger Shuler, who predicted in a Sept. 8 column the day on which the DOJ would issue its indictment for maximum pre-election impact, aptly summed up the situation in his column this week entitled, "Alabama Arrests Mark a Dismal Episode for the Obama DOJ." Shuler wrote:

How bad does the Obama DOJ look in all of this? Let us count the ways. The investigation was initiated by two of the most corrupt U.S. attorneys from the George W. Bush era. The prosecution team includes at least four prosecutors who have been involved in dubious cases.

The indictments clearly were timed to have an impact on the November elections. To top it off, U.S. Rep. Artur Davis (D-AL), an Obama buddy, piped up and revealed himself to be even more of a weasel than we already thought he was.

Most importantly, however, the investigation covered only one side of a two-pronged controversy, and DOJ officials flatly lied to the public about the scope of their handiwork. In short, yesterday's charade in Alabama almost makes you yearn for the good old days of the Bush administration.

Furthermore, the non-partisan Justice Integrity Project that I lead has heard for more than a year from Alabama sources that top Republicans in Alabama have looked for ways to snare a larger share of McGregor's gambling loot, in part by fleecing him out a $13 million investment he made in a Russian lottery venture.

Reportedly, the money was secretly steered to Republican campaign coffers by claims from the Riley camp to McGregor that someone in Russia stole the funds, regrettably. Investigative reporter and Russia Today cable news contributor Wayne Madsen published on his subscription-only www.waynemadsenreport.com a long, independently researched column detailing more precisely the reputed scam on McGregor and several other Alabama investors. The details are congruent with what we've heard.

Separately, several other investigative reports by DOJ critics in the past day have attacked the circumstances of the DOJ's gambling indictment. Much of it questions DOJ's timing, motives and veracity in welcoming all witnesses, including former Republican candidate for governor Bill Johnson. He wrote Leura Canary asking to testify about his party's high-level fund-raising from Indian casinos.

The specific DOJ charges appear to be supported by electronic recordings and at least one snitch, thereby providing at least some substance despite the usual murky interpretations involved in political wheeler-dealing.

Beyond that, DOJ's remarkable embrace of tainted prosecutors and selective prosecutions is best explained by its culture: Democratic and Republican DOJ leaders alike benefit long-term (including in their lucrative post-government careers) by coddling over-zealous and politically motivated fellow prosecutors, and then using superficial internal investigations to whitewash whatever happened.

The payoff? The major Washington law firm Covington & Burling supplied the DOJ both Breuer and his boss, Attorney Gen. Eric Holder. The firm has long made its money by serving such important clients as tobacco companies and, more recently, defense giants such as Halliburton. When personnel acquire the public interest cachet of a high administration position their market value is vastly increased.

In extreme instances, this can take the form of multi-million no-bid contracts that DOJ has awarded to such well-connected personnel as former Attorney Gen. John Ashcroft to oversee ethics compliance by corporations in lieu of their indictment. More commonly, well-connected DOJ personnel are rewarded by promotions and partnerships upon departure with high-paying law firms.

USA Today has been illustrating the problem of rampant prosecutorial misconduct with an investigative series about 201 cases since 1997 identified by judges. Meaningful punishment by DOJ is almost unknown.

Earlier this summer, our Justice Integrity Project showed that the DOJ relied for the past two years on special prosecutors found guilty by a court of misconduct themselves in 2008 to lead the department's two most important national internal probes.

Madsen, a former National Security Agency analyst and author, entitled his column today, "Ponzis and casinos: The transformation of America into a kleptocracy, state by state." He compared the Alabama indictments with a presentation about Minnesota that he saw at the National Press Club last week.

The lecture and Q&A by former Chicago Sun-Times and Atlanta Constitution political editor James Merriner focused on his research about federal misconduct in Minnesota after authorities discovered a $3.65 billion Ponzi scheme.

Merriner described how Minnesota prosecutors, courts and the Ponzi scheme operator's criminal defense attorney-turned-receiver sought to steer assets via questionable tactics to well-connected bankruptcy lawyers and to the federal government itself through forfeiture. Merriner's book is Ponzi-Dot-Gov, with his analysis cited in one of our own recent columns.

From the "Heart of Dixie," Alabama, to the "North Star State," Minnesota, unscrupulous federal and local prosecutors, attorneys, judges, and businessmen are fleecing taxpayers and investors.

The corruption that has permeated state and local government, courthouses, and business councils is turning America into a Nigerian-style kleptocracy where corruption pays off and whistleblowing results in continuous retaliation from those who hold positions of trust....

Soon, we'll provide a more detailed description of the tainted prosecutors whom the DOJ assigned to the new Alabama prosecutions, as well as our theories of why the DOJ orchestrates such travesties for scant apparent reason.

Most important, we'll provide a courageous on-the-record warning to the public from a once-important figure in the nation's gambling industry. He worked closely with his friend Jack Abramoff on gambling issues on a major regional and indeed national level.

In an exclusive interview, our source will describe why the gaming industry has a special ability to "bring democracy to its knees" because gambling creates special opportunities for money laundering to impact political campaigns.

Our view is that illicit money plays a key hidden role determining public policy on jobs, defense, the environment, education -- and indeed entire range of issues that voters think we're deciding on their merits in the mid-term elections.