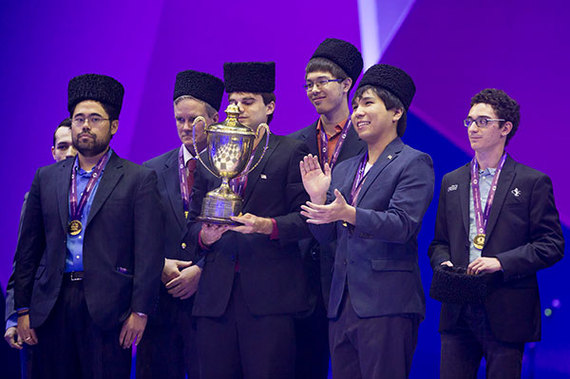 The United States bested 170 teams and won the 42nd World Chess Olympiad in Baku, Azerbaijan. At the closing ceremony last Tuesday, they received the gold medals and the traditional Azerbaijani hats - the papaqs. Sam Shankland raised the Hamilton-Russell trophy that travels with every winning team until the next olympiad. For the next two years, it will be displayed at the World Chess Hall of Fame in Saint Louis, Missouri.
The last time the United States won was 40 years ago at the 1976 Chess Olympiad in Haifa. At that time, the gold medals hung on one single game that was out of our hands and lasted 14 hours and 111 moves. It ended in our favor. The last round in Baku was even more of a nail-biter and the gold depended on a single move. Only when an Estonian player took a wrong turn and lost to his German opponent could the Americans celebrate.
Why was it so close when they did almost everything right? They finished undefeated with 20 match points, winning nine matches and drawing with Russia and the Czechs. But the team of Ukraine also scored 20 points. They lost to the U.S., but beat all the other teams, including the defending champions China and the top seeded Russia. It was down to a complicated tiebreak, an antiquated entity based on the results of other teams. Russia secured the bronze with 18 points.

China won the gold in the Women's section. Poland clinched the silver medals with a better tiebreak over the bronze Ukraine. The current finance minister of Latvia, Dana Reizniece-Ozola, surprised everybody with a fine victory over the Women's world champion Hou Yifan.
Ukraine won the Gaprindashvili Cup, one country combined results from the Open and Women sections.
Baadur Jobava of Georgia had the best result on the top board (8/10).
Eugene Torre, 64, played in his 23rd Olympiad, a record, and scored the most points (10/11).
The world champion Magnus Carlsen led Norway to its historically best fifth place. Carlsen will be promoting chess in New Jersey next week, playing an exhibition match against Fabiano Caruana (see below) before starting his preparation for the World Championship match scheduled for November in New York.

The top three grandmasters on the U.S. team are now rated among the best seven players in the world, but the team was seeded second behind Russia. On paper, it was a toss up, but the Russians were brought to a standstill after India tied them 2-2 one round before the end. In that match Pentala Harikrishna beat the world championship challenger Sergey Karjakin. Here are the U.S. team results:

Caruana and Wesley So were undefeated. Hikaru Nakamura was the workhorse, playing all 11 games, and was almost knocked out by a cold in the last few rounds. Sam Shankland did well until the last round. Ray Robson's unfortunate loss to Alexander Grischuk of Russia made it hard to put him back in the lineup.

A guide to Olympic gold and other medals

Before 2008 the medals were decided by board points and every single game was important. The match points settle the outcome now. In either case the following rules help to get the medals:

In 1984 in Thessaloniki, the U.S. team defeated the Soviets, but the Russians won the gold anyway. England finished second and we were in a fight for the bronze with the Hungarians. After three draws, I beat Lajos Portisch on the top board and we ended third by a half point.

With his looks, determination and mental strength, Caruana resembles a Tour de France climber and he brings these attributes to the chessboard. The U.S. champion finished undefeated in Baku and was instrumental in beating Ukraine. After three draws, he masterfully exploited a better pawn structure. His win kept Ukraine out of the top spot. 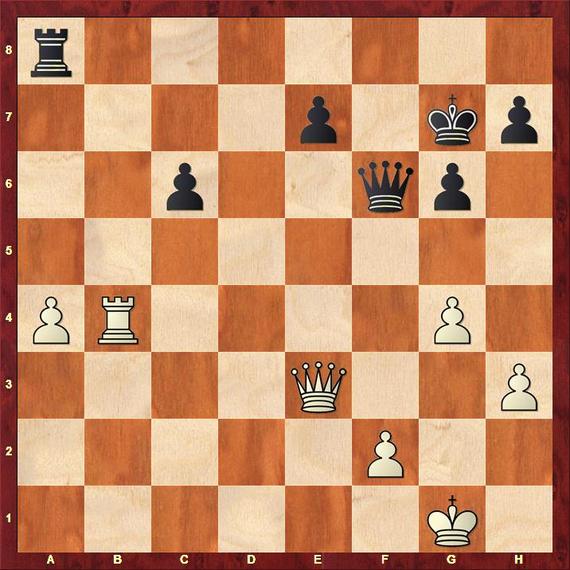 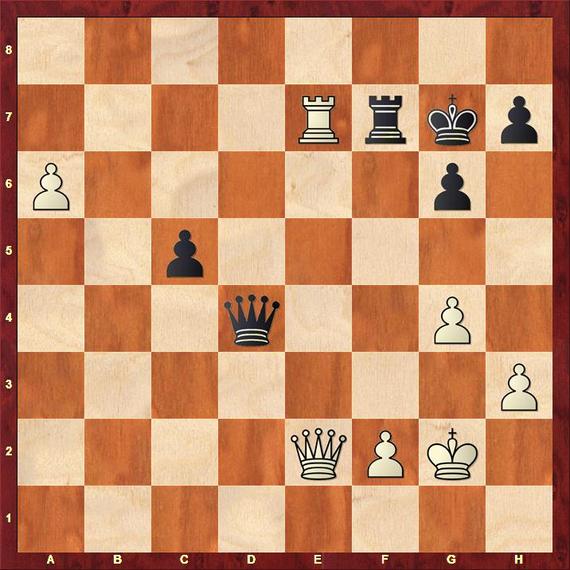 In 1986 in Dubai, the United States beat the Soviets. After three draws, Garry Kasparov had a better chances, but his awkward winning attempt backfired and he lost to Yasser Seirawan. But my loss to England's Nigel Short and Yasser's last round loss to Bulgaria's Kiril Georgiev had more impact on the final outcome. Although we were leading going into the last round, we ended up with the bronze medals.

Wesley So also didn't lose any games in Baku and with his win with the black pieces against Ian Nepomniachtchti secured an important tie against Russia. His opponent won the first seven games, but Wesley didn't give him any chances. 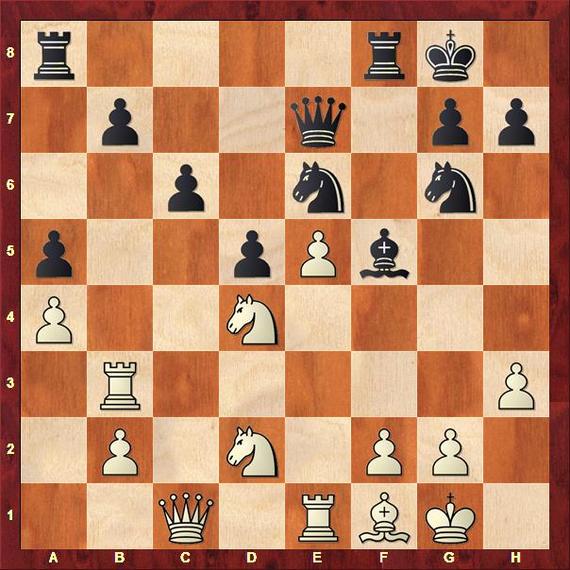 Incredibly, the first two rules didn't help in Baku. As in Haifa other teams decided who got the gold.

In 1976, we spent several excruciating hours in the lobby of the Dan Carmel hotel, where the Haifa Olympiad took place. The Dutch team needed IM Franc Kuijpers to beat the Finnish master Ilkka Saaren to clinch first place on a tiebreak, but after 14 hours and 111 moves the game was drawn.

The final position in the game Kuijpers-Saaren. 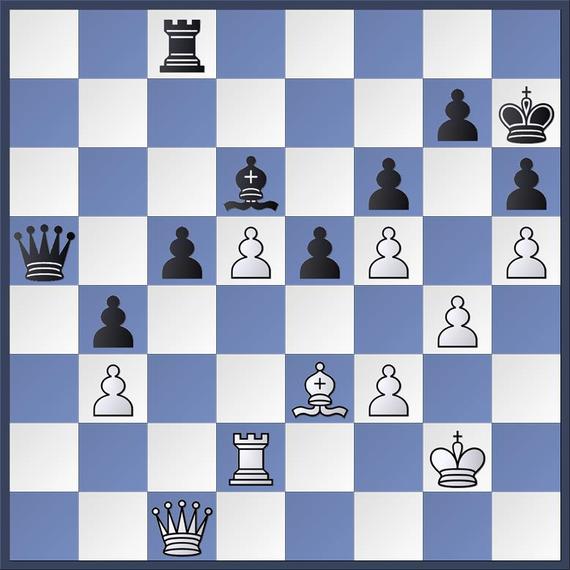 This position didn't change much in the last 30 moves. Kuijpers gave up trying and we won the gold.

In Baku, the top medals were decided by a "byzantine" tiebreak, as Donaldson put it. It turned out that a tie between Estonia and Germany would give the gold to Ukraine. And it was headed that way, except for one wrong check. 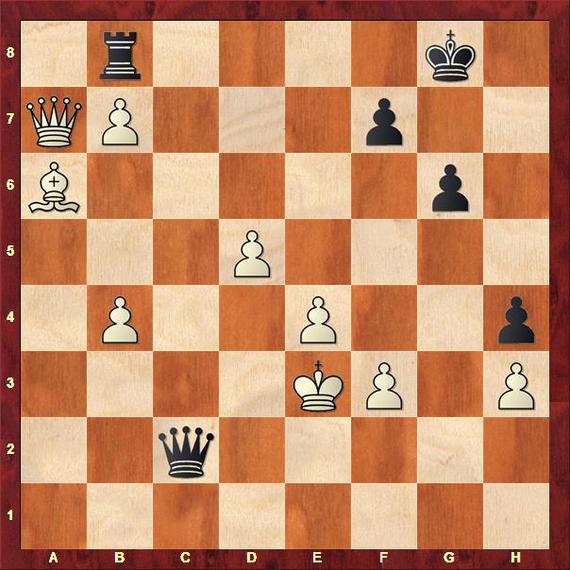 Carlsen vs. Caruana next Thursday

The world chess champion Magnus Carlsen and the current U.S. champion Fabiano Caruana, who led the U.S. team to gold medals at the recent Chess Olympiad in Baku, will compete in a "tag-team" match at the Liberty Science Center in Jersey City, NJ (222 Jersey City Blvd.) on Thursday, Sept. 22 from 10:30 am till noon.

Caruana and a designated player will challenge Carlsen and his teammate in a sort of chess doubles. Carlsen will also play a simo against 13 opponents, qualified via PlayMagnus app. Paul Hoffman, president and CEO of LSC, will comment on the play. It will be live-streamed via Norwegian TV. Both players believe that chess can have an impact on STEM education, favored by the Center.

Grandmaster Lubomir Kavalek participated in nine Olympiads from 1964 till 1986. He played twice for Czechoslovakia (1964 and 1966) and seven times for the United States (mostly on the top board). He holds the all-time record of six team medals (one gold and five bronze medals) among American players. He achieved it with 25 different teammates.