A new report by GlobeScan, an international opinion research consultancy, suggests that the number of Americans who believe in the strength of the free market economy dropped markedly last year. In fact, according to the survey results, both Brazil and China, on a percentage basis, ranked higher than the U.S. in overall support for free market capitalism.

The report, released this week and based on 12,884 interviews in 25 countries, asked participants to agree or disagree with the statement that the "free market economy is the best system on which to base the future of the world."

GlobeScan found Americans strongly agreeing or somewhat agreeing dropped to 59 percent from 74 percent, a 15 percent dip from the year prior and the second largest year-over-year drop of any country besides Turkey. An even more dramatic drop (32 percent drop) occurred among those in the U.S. with annual incomes below $20,000, of which only 44 percent agreed that the free market was the ideal system.

When GlobeScan first compiled this data in 2002, 80 percent of Americans answered that the free market was the best economic system for the future, then the highest percentage among all surveyed countries.

"America is the last place we would have expected to see such a sharp drop in trust in the free enterprise system," GlobeScan Chairman Doug Miller said in a press release. "This is not good news for business."

Immediately after the financial crisis, GlobeScan actually found a slow but steady increase in U.S. support for the free market. Miller, however, attributes that temporary uptick to the country's "tremendous social cohesion" following sustained shocks such as financial collapse or terrorists attacks. "But after a while, after the hardship is sustained," he continues, "it has caught up with Americans."

The U.S. drop-off means merging economies like Brazil (68 percent support for free economy) and China (67 percent) now appear to support free enterprise at a much higher rate than Americans. India, with a 58 percent freemarket approval rate, roughly matched the U.S. results. Among participants in all countries, 54 percent said free market capitalism is the best economic system for the future -- the same percentage as one year prior.

The total percentage of Americans that don't trust the free market remains unchanged at 26 percent.

The below chart maps by year the percentage of Americans and Chinese that strongly agree or somewhat agree that the "free market economy is the best system on which to base the future of the world": 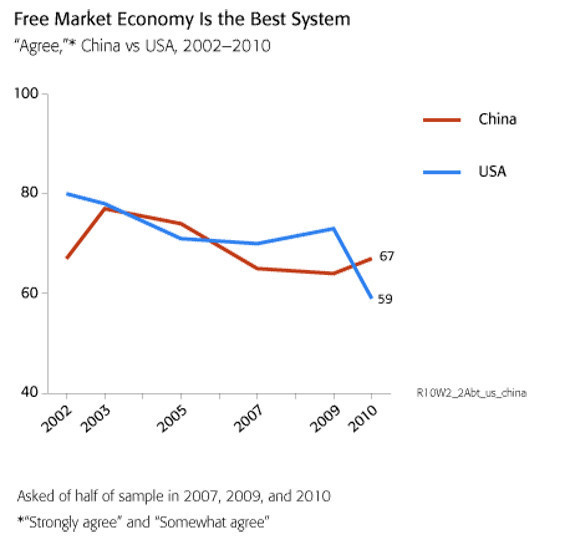