Why are some churches in the U.S. calling for boycotts and divestment aimed at companies that profit from Israel's occupation of Palestinian territories? The decision last summer of the Presbyterian Church USA (CPUSA) to divest church pension funds from three such companies resulted in first-page coverage in The New York Times. A few weeks ago a grassroots group of pastors and lay members of the United Methodist Church (UMC) launched a holiday-season campaign to boycott products made in Israeli settlements located on occupied Palestinian land. While this group of Methodists is not an official agency of the UMC, it bases its boycott call on a 2012 decision of the policy-making body of the church calling "on all nations to prohibit any financial support by individuals or organizations for the construction and maintenance of settlements; and also to prohibit the import of products made by companies in Israeli settlements."

While mainline protestant churches were generally very supportive of the creation of Israel after World War II, the 1970s witnessed growing criticism of Israel's occupation of Arab land. Since then, various church organizations around the world, including in the U.S., have issued numerous declarations affirming that an end to the occupation was a prerequisite for a just and lasting peace between Israelis and Palestinians. However, as the decades rolled by and Israel continued to expand its illegal settlements, to the consternation of the international community, voices started calling on their churches to "put [their] money where [their] mouth is."

Of course, Christian missions from all around the world have maintained a salient presence in historical Palestine/Israel for centuries. While the indigenous Palestinian Christians have dwindled as a percent of the population, hundreds of churches dot the landscape not only in Jerusalem, Bethlehem and Nazareth but in dozens of Palestinian towns and villages in Israel, the West Bank and Gaza. Palestinian Christians continue to be heavily represented in leadership positions in their communities, and their narrative of suffering under Israel's occupation is all but identical to that of the majority Palestinian Muslims. Christian missionaries are also not confined to their religious institutions but play a vital role in providing health and educational services to Palestinians, Muslims and Christians alike. Foreign missionaries, therefore, witness firsthand the depravities and humiliation that Palestinians face in their daily lives. 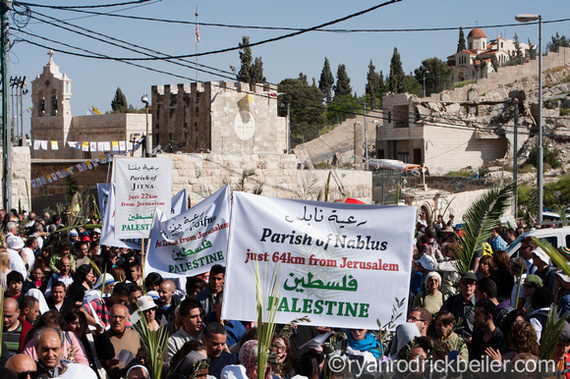 Some foreign Christians have, over the years, extended their humanitarian services to activities that directly confront the oppressive conditions that Palestinians face in their daily lives. For example, the Christian Peacemaker Teams (CPT) recruits volunteers from all over the world to collaborate with local Palestinian and Israeli peacemakers in nonviolent, grassroots resistance to the Israeli occupation. According to CPT, the teams do this by:

In 2009 a group of clergy and lay leaders representing all major Palestinian Christian denominations issued the Kairos Palestine document, calling upon the international community to boycott and divest from companies that profit from the Israeli occupation. The document asserts:

Through our love, we will overcome injustices and establish foundations for a new society both for us and for our [Israeli Jewish] opponents. Our future and their future are one. [The choice is between] the cycle of violence that destroys both of us or peace that will benefit both.

The U.S. Methodists urging their church and others to boycott Israeli settlements products adopted the name United Methodist Kairos Response (UMKR), inspired by this call. UMKR follows a long tradition of spiritual support for forms of resistance that pose as a sane alternative to violent conflict in different parts of the world. They, and similar groups associated with other Christian denominations, point to prominent spiritual leaders who have set examples of nonviolent involvement in otherwise bloody struggles. They include names like Mahatma Gandhi, Dorothy Day, Bishop Desmond Tutu, Archbishop Oscar Romero, and, of course, Martin Luther King.

Of course, this movement for economic measures against Israeli settlements is not confined to mainline Christian Protestants. In fact, Jewish Voice for Peace (JVP) is among the foremost groups in the U.S. advocating for boycotting products made in the settlements. JVP has, incidentally, experienced phenomenal growth after Israel's latest attack on the Gaza Strip, not only among young, secular Jews but even among some rabbis around the U.S.

Both JVP and Christian advocates of boycotts and divestment see Israel's bellicose policies as destructive not only to Palestinians but also to Israeli Jews. The involvement of churches in this growing international movement indicates that concern for a just and lasting peace for Palestinians and Israelis is finally making inroads into mainstream American society.