According to a recent Gallup poll, the number of Americans who have faith in organized religion is at an all-time low.

Organized religion and the Church "continued to rank first in most years through 1985, outranking the military and the U.S. Supreme Court, among others," as reported by the Gallup study. 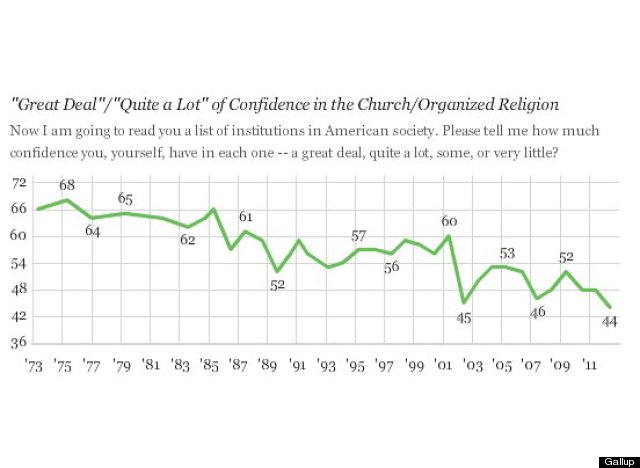 American confidence in organized religion first began to fall in the mid to late 80's, falling below 60 percent for the first time. The consistent decline may be tied back to the scandals and crimes associated with the church since, the poll states. The scandals associated with televangelist preachers Jim Bakker and Jimmy Swaggart and the 2002 child molestation charges and cover-ups in the Catholic church could be contributing factors. 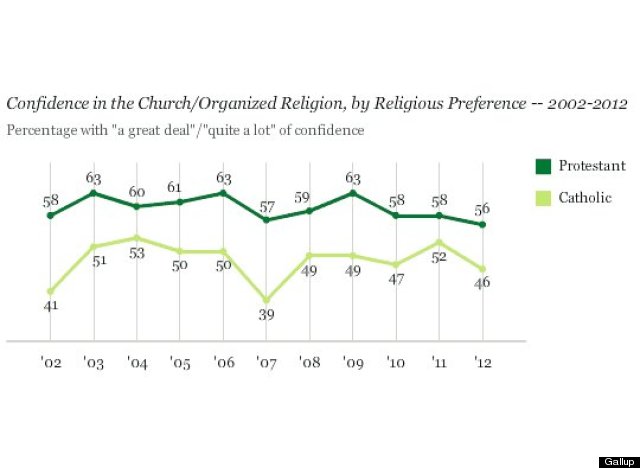 This year the church or organized religion ranked fourth amongst the 16 institutions surveyed tying it with medical institutions. The poll concludes that two major findings are revealed through this trend:

"First, the long-term decline in Americans' confidence in this societal institution since 1973, and second, the suppressed confidence among Catholics relative to Protestants starting in 1981, and becoming more pronounced by 2002."

The 2012 poll showed American confidence in public schools, banks, and television news was also at its lowest this year.

PHOTO GALLERY
Top 10 Most and Least Religious States
Download
Calling all HuffPost superfans!
Sign up for membership to become a founding member and help shape HuffPost's next chapter
Join HuffPost