The tenacious U.S. drought that continues to hamper American agricultural output and put water supplies and Mississippi River commerce at risk worsened during the past week, particularly in the Southeast, according to figures released on Thursday. The new U.S. Drought Monitor shows that all categories of drought increased across the country between Nov. 20-27, with the largest increase occurring in an area from Alabama northeastward to Virginia. 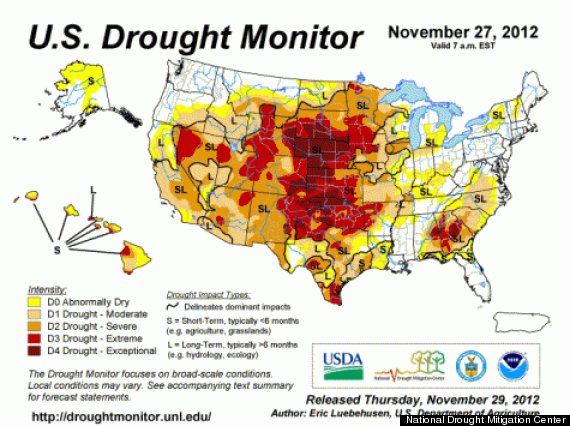 This has already been the most intense and widespread drought to strike the U.S. since 1988, and its severity is on par with the droughts of the 1950s. The drought has also earned comparisons to the devastating droughts of the 1930s "Dust Bowl" era, although those droughts were more intense and longer-lasting than this event, and the impacts this time have been reduced by improved land management practices.

The drought may rival Hurricane Sandy as the most costly U.S. natural disaster of 2012, with damage estimates already ranging between $75 billion to $150 billion. Deutsche Bank Securities has predicted that the drought will be responsible for a 0.5 to 1 percent drop in U.S. gross domestic product this year, a significant drop considering the relatively slow pace of growth throughout the year.

The Drought Monitor shows that a large area of moderate to exceptional drought continues to affect areas from the Central Rockies to the Northern and Southern Plains, as well as the Upper Midwest and Mid-Mississippi River Valley. The drought is worsening in Texas, which has suffered from drought conditions for at least two years, and in Georgia, where drought has also been long-lasting. Neither of these areas are expected to see significant drought alleviation during the winter, and in fact, Texas may see drought tighten its grip on the state, according to the Nov. 15 Seasonal Drought Outlook from the National Oceanic and Atmospheric Administration (NOAA). 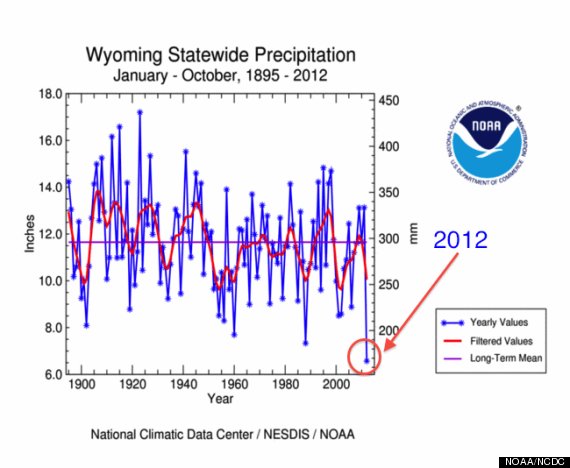 Statewide average precipitation in Wyoming for the January to October period, going back to 1880. Note how much below average 2012 has been so far (circled). Credit: NOAA/NCDC

The Northern Plains continue to be the hardest hit states, where Wyoming and Nebraska recorded their driest January-to-October period on record. Four other states ranked among their top 10 driest January-to-October periods on record, as well. In addition, some locations within these states may set all-time records for dryness during November, with little to no precipitation falling at all this month.

This particular drought, which began in 2011 and expanded dramatically starting in March of this year, likely was triggered by natural climate variability. In particular, the pattern of sea surface temperatures in parts of the Pacific and Atlantic Oceans during this period tends to favor North American droughts, according to climate researchers. However, the drought was likely intensified by global warming-related heat waves during the spring and summer, with more than 15,000 temperature records broken or tied during March 2012 alone. The warm temperatures helped further dry plants and soils.

The drought is also threatening commerce on the Mississippi River, as the Army Corps of Engineers is considering plans to deepen some parts of the River in order to keep barge traffic moving, despite a dramatic drop in water levels.

According to a report from Bloomberg Businessweek, computer models show that absent more rain, Mississippi River navigation would be limited starting on Dec. 11, and that the river could reach a record low shortly before Christmas. The story said that $7 billion in goods typically pass through the river during an average December and January.

In an illustration of the extreme weather that has affected the U.S. in recent years, it was only a little more than a year ago that Mississippi River commerce was disrupted by record flooding induced by a combination of heavy rainfall and massive snowmelt.