The U.S. economy recovered from the recession quicker than every country except Germany, according to a report released Monday by President Barack Obama's economic team.

The report offers a comprehensive look at the progress made since the financial crisis of 2007-08, which marked the worst recession since the Great Depression. The chart below shows the output per working-age person among the 12 countries that suffered most from the banking crisis. 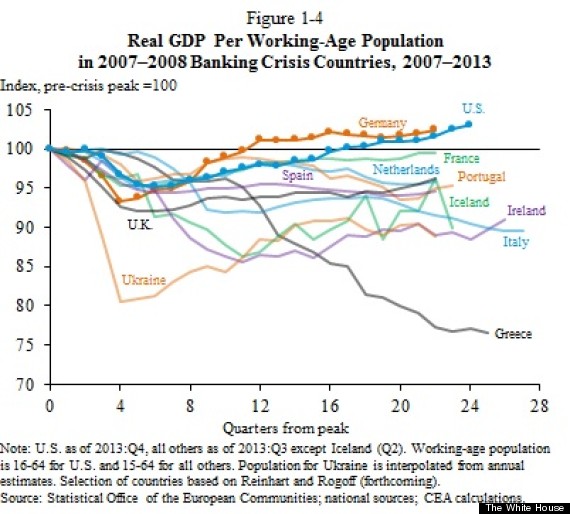 The chart shows that the United States is just one of two countries where GDP has returned to pre-crisis levels, the other being Germany. The report primarily attributes the U.S. economic recovery to Obama's 2009 stimulus package, known as the American Recovery and Reinvestment Act. The Council of Economic Advisers estimated in the report that the Recovery Act, at a macroeconomic level, saved or created roughly 6 million job-years, where a job-year is defined as "one full-time job for one year."

A host of other jobs measures contributed to the economic recovery, including the extensions of unemployment insurance, the payroll tax cut and other tax cuts for business investment and hiring. The auto industry bailout is also mentioned as part of the broader policy response that put the U.S. economy back on track, as well as investments in social safety net programs that helped keep millions of Americans out of poverty.

"The fact that the United States has been one of the best performing economies in the wake of the crisis supports the view that the full set of policy interventions in the United States made a major difference in averting a substantially worse outcome," the report states.