Leaders from over 165 nations have come to the Paris climate talks with new climate commitments in hand. That includes the United States. President Obama said at the first session of the conference, "America not only recognizes our role in creating this problem, we embrace our responsibility to do something about it."

America has committed to significantly cut carbon pollution from power plants, vehicles and other sources of climate-changing pollution. And our plans to achieve these reductions have helped inspire China, India and many other countries to take action.

In recent weeks, however, we saw that some Republican leaders in Congress continue to resist this global momentum to clean up dangerous pollution and protect future generations from destructive climate change. They tried again to undermine U.S. leadership before Thanksgiving, and once again they failed.

Their latest attempt involved using the Congressional Review Act to try to repeal the Clean Power Plan. The plan establishes the first national limits on carbon pollution from power plants -- the largest source of U.S. carbon emissions. It is a critical part of U.S. climate leadership.

The resolution to block the Clean Power Plan passed by a weak showing of 52 votes -- nowhere near the 67 votes needed to ensure its survival in the face of a Presidential veto. And the president will veto the bill. The Clean Power Plan will continue to move forward -- most states are already designing their roadmaps for implementing it.

This attempt to derail climate action does not erode the firm legal, technical and political footing of the plan. If anything, it reveals how out of step Republican leadership is with the nation. 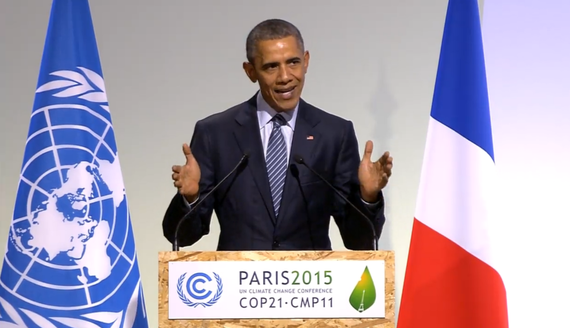 Poll after poll after poll shows the vast majority of Americans want leaders to tackle climate change. One survey found that 70 percent of Americans support strict limits on carbon pollution from power plants. And a recent survey by leading GOP pollsters found 56 percent of Republicans understand that climate change is happening and the vast majority support clean energy solutions.

Leading corporations are also joining the call for climate action. This fall more than 80 companies, including Microsoft, Walmart, Cargill, Bank of America, PG&E, Nike, Alcoa, and GE, signed the American Business Act on Climate Change Pledge. They vowed to support a strong international climate agreement in Paris and to reduce their own carbon emissions. These companies employ are an economic force, and they agree that cutting carbon pollution is good for the nation and good for business.

It is also good for our health and communities. The Clean Power Plan is expected to generate tens of thousands of new jobs, make the air safer to breathe and save the average American family $85 a year on energy costs. That's why so many public health, faith, parent, small business, and climate justice groups have voiced their support for the plan.

This broad-based backing will help shield the Clean Power Plan from political attacks. And soon, lawmakers who fail to support it will face negative consequences. More and more Americans asking elected officials what they are doing to confront the threat of climate impacts. If the answer is nothing--or obstruction--officials will pay a price.

Three Republican Senators decided to stand with their constituents in the CRA vote: Senator Ayotte of New Hampshire, Senator Collins of Maine and Senator Kirk of Illinois broke with their party and joined the growing call for a safer, healthier future.

The task before us at the Paris climate talks is to work together to build a durable international climate agreement and not let ourselves be distracted by those who minimize the importance of tackling climate change. This new agreement needs to set us on the road to meeting ever-stronger commitments and creating greater climate stability. The U.S. must help lead the way.