The first floating wind turbine in U.S. history went upright and onto the water in Brewer, Maine, on Friday, on its way to being put in place and connected to the grid off the coast near the town of Castine.

The 65-foot-tall VolturnUS 1:8 prototype is a small-scale model of the giant 6-megawatt turbines the University of Maine’s Advanced Structures and Composites Center and its partners in the DeepCWind Consortium hope to have in the water someday. Deep-water wind supporters in Maine believe that by 2030 they can grab 5 gigawatts of power with arrays of large turbines up to 50 miles off the coast, away from conflicts and where the winds blow strong and consistent. 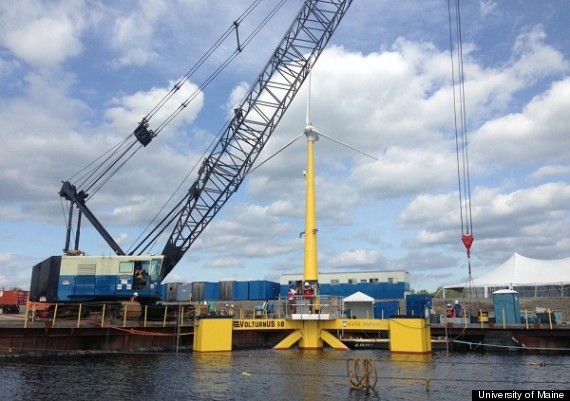 The VolturnUS project has been backed with $12 million over the past five years by the U.S. Department of Energy, which is also supporting a floating-turbine project trying to get going off the Oregon coast.

“Led by the University of Maine, this project represents the first concrete-composite floating platform wind turbine to be deployed in the world – strengthening American leadership in innovative clean energy technologies that diversify the nation’s energy mix with more clean, domestic energy sources,” the DOE said in a press release as the VolturnUS demo turbine went into the Penobscot River on Friday.

The American Wind Energy Association joined in applauding the launch of the turbine. Christopher Long, manager of offshore and siting policy for the group, called it “another signal of steady progress toward development of an American offshore wind industry.”

Land-based wind power has flourished in the U.S., with 60 gigawatts of capacity online by the end of 2012, second only to China. But the country has yet to get a turbine installed at sea, although a number of projects are in the works and some appear to be getting close.

Although more costly to develop, many analysts believe offshore has better long-term potential than land-based wind, mainly due to stronger and more consistent winds. The United Kingdom has been leading the charge offshore; it brought 854 MW of offshore wind capacity online in 2012, driving its total to 2,093 MW. No other country has yet to reach 1,000 MW.

Floating turbines are seen as a next logical step in offshore wind development. Standard offshore turbines are nearly always installed in waters less than 30 meters deep, but deeper water accessible only with floating turbines could offer even better wind as well as fewer stakeholder and aesthetic conflicts. A couple of demo floating projects have launched in Europe, one by Energias de Portugal and Principle Power off Portugal and the world’s first, in 2009, Statoil’s Hywind.

Beyond this smaller-scale pilot, DeepCWind is planning to build two of the 6-megawatt full-sized turbines in the 2015-17 period. To aid in that effort, this past December the U.S. Department of Energy gave the university a $4 million grant (at the same time it backed the Oregon floating project), and other such projects are brewing around the world.

Ultimately, the Maine group aims to have some 80 turbines floating in 4-mile by 8-mile zone 20 miles from the coast. The team figures those turbines will be able to produce electricity at 10 cents per kilowatt-hour without subsidies, meeting a 2020 goal of the DOE.