(Reuters) - Robert Penney has seen his financial future and it involves heaps of frozen yogurt.

Penney and his wife, Dayna, purchased a Menchie's franchise, offering self-serve frozen yogurt, in Bellingham, Washington, in July 2011. They expect the business, open since April, to be profitable its first year.

"We basically had to put our life on the line," said Penney, 44, a former corporate engineer. He declined to provide details about how much was invested but said a typical Menchie's requires $350,000 to $400,000. The couple drew on personal savings and a credit line against their home.

The Penneys are among hundreds of aspiring entrepreneurs betting on the latest trends in franchising. Franchising - which offers branded businesses with established methods of operating - is expected to show modest gains in 2012, as measured in the number of U.S. outlets, after progressive yearly declines since 2008.

The hottest concepts include self-serve frozen yogurt and gourmet burgers, in-home senior care, cleaning and pet services. But financing is still tough after the 2008 credit crunch and new franchisees sometimes risk their retirement funds. In addition, franchise experts cite concern about jumping on a franchise "bubble" that can pop as fickle consumers lose interest.

HOT TO BE COOL?

Self-serve frozen yogurt chains such as Menchie's and Yogurtland are spreading rapidly, driven by demand for healthier foods and the popularity of personal-choice menu options. Menchie's, which has more than 220 locations in the United States and elsewhere, expects to have 500 stores by 2013. But whether the yogurt trend is a fad remains to be seen.

"Every time I see one there's nothing different about them," said Dan Rowe, whose firm, Fransmart, helps roll out new franchise concepts. "Out of this you'll have a few players and a lot of carnage."

"Segments that people ignored, they're taking off," he said.

Annual profit for senior-care franchises is slightly below $100,000, roughly on a par with food-and-beverage concepts. However, the median investment for senior care is well below $100,000, or about a fifth of the typical outlay for a restaurant franchise, according to a Franchise Business Review report this year.

The number of U.S. franchise units is poised to increase by 1.5 percent in 2012 for a total of nearly 747,300, according to the International Franchising Association, a trade group. A diverse crowd is buying in: laid-off corporate executives, college graduates facing a tough job market, veterans returning from Afghanistan and retirees looking for a safer place to park their savings.

"The growth is across the board," said IFA Chairman Stephen Caldeira in a recent interview. "Franchised businesses are increasingly optimistic about prospects for growth."

Still, it has been a bit slower going than originally forecast. The IFA has cut 2012 unit growth forecasts twice since December, when it called for improvement of 1.9 percent. Caldeira pointed to business owners' uncertainty about issues such as taxation and the availability of financing.

"There's still a lack of consumer confidence and consumer spending," he said. "More work needs to be done for small business owners to get access to credit."

Many entrants to franchising are gravitating toward businesses that can be purchased with lower levels of investment, said Blair Nicol, a FranNet franchise business broker covering Southern California and the Pacific Northwest.

"We're seeing more home-based, more office-based, more services-based, less brick-and-mortar businesses," said Nicol, who has also observed more than half of the entrepreneurs he works with using retirement savings to get into the market.

According to Franchise Business Review, concepts such as Heaven's Best Carpet Cleaning, Sit Means Sit Dog Training and JumpBunch, which offers fitness programs for young children, are examples of franchises with average investment of less than $100,000.

Tara Bailey, 33, a newly minted franchisee outside Atlanta, tapped her 401(k) plan to buy a senior home care franchise, Right at Home, in December. Bailey is waiting on Georgia state licensing before she can open the business.

"My husband and I did not want to go the personal route of taking on loans," she said.

Borrowing from retirement, considered risky by some financial advisers, can be done with a loan from an existing 401(k) or by rolling over funds into a new plan that is used to buy stock in the franchise, providing startup capital.

Bailey declined to disclose financial details, but Allen Hager, CEO of the Omaha, Nebraska-based Right at Home chain, said the typical startup costs, including franchise fees, range from $90,000 to $100,000.

"We're a lower-cost startup and we've got a proven track record," he said, adding: "We're an aging society."

Typically, in exchange for a franchise fee and ongoing royalties on sales, franchisors offer their ranks operational guidelines, some form of cooperative marketing, training and access to a network of other operators for support.

Even so, things do not always go according to plan.

Nick Roers, a Minneapolis-based co-owner of a Rapid Refill franchise, which provides ink and toner to businesses, said he was surprised by how difficult it was to build relationships that would ultimately lead to sales.

"I was shocked at how often people wouldn't even give you the opportunity to try it," said Roers, the former proprietor of an independent ice cream shop. "We were hoping to break even at six months and it was more like a year."

Brian Cole, a franchise attorney based in the Los Angeles area, has these tips when considering a franchise purchase:

* Read the FDD (franchise disclosure document) carefully. Pay special attention to Item 19, where an increasing number of franchisors are opting to share details on financial performance.

* Make a list of questions and talk to other franchisees for the answers. They should be pointed and include, "If you had it to do over again, would you purchase this franchise?"

* Contract an attorney to review your franchise agreements. This step can usually be done for a few thousand dollars.

* Consider checking an objective source of franchisee satisfaction and overall performance such as Franchise Business Review.

* Check the Federal Trade Commission guidelines for franchising, which provide details about complaints against a franchisor and other useful information. (www.ftc.gov/bcp/franchise/faq1.shtm)

* Beyond startup and operating costs, which vary greatly by industry and region, franchisees should have access to at least three months of personal expenses.

(The author is a Reuters contributor. The opinions expressed are her own.)

PHOTO GALLERY
Cities That Spend The Most On Fast Food

U.S. Franchising Picks Up, But Hurdles Remain
Cities That Spend The Most On Fast Food 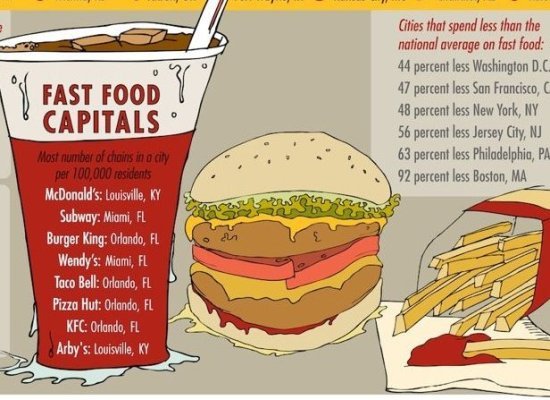