When my friends at the Hellenic American Leadership Council, an organization building new leaders in the Greek American community through activity in public affairs of our nation, asked me to write a piece for their new blog page, I thought long and hard about a topic -- to remind the world, and particularly the United States -- about the strategic importance of Greece.

People -- and the media -- were discounting the long and tested relationship our two nations have shared -- for over two centuries. But no incident was more prevalent in my mind than one that I, personally, was involved in.

A decade ago when the war drums were beating and our allies on the United Nations Security Council were crafting language to condemn Iraq -- the United States turned to its "strategic ally" in the Eastern Mediterranean -- Turkey -- and asked for the rights to pass troops and equipment over its territory.

The plan to use our "friend and ally" Turkey was of the highest strategic importance to the U.S. war efforts and was intended to save time, money and lives as it would have placed U.S. troops in direct contact with the Iraqi border -- a path through what was perceived then to be "friendly territory" through the nation of Turkey.

Turkey said no. Our "friend and ally" used every excuse and stalling tactic in the book. Eventually -- after it was no longer important to the United States and after air and land superiority had been established, the Turks approved over flights. But this, after tremendous hardship and frustration to US military planners, who actually abandoned plans to use Turkey well before they gave the green light.

Turkey's government leaders tried extorting the United States -- to the tune of a $15 billion "aid package" in exchange for their "friendship."

According to President George Bush in his memoirs Decision Points, Turkey let America down.

By March 2003, the battle plan was ready. After more than a year of probing and questioning, Tommy Franks and his team had developed an operation that I was confident would overthrow Saddam Hussein swiftly and decisively, while minimizing the loss of American and Iraqi life.

The one remaining uncertainty was the role of Turkey. For months, we had been pressing the Turks to give us access to their territory so that we could send fifteen thousand troops from the Fourth Infantry Division to enter Iraq from the north. We promised to provide economic and military aid, help Turkey access key programs from the International Monetary Fund, and maintain our strong support for Turkey's admission to the European Union.

At one point, it looked like we would get permission. Prime Minister Abdullah Gul's cabinet approved our request. But when the Turkish parliament held a final vote on March 1, it came up just short of passage. I was frustrated and disappointed. On one of the most important requests we had ever made, Turkey, our NATO ally, had let America down.

The one country that didn't blink, however, was Greece. From the beginning of the operation and all preparations leading up to the invasion of Iraq, the United States repeatedly turned to its real "friend and ally" in the region, Greece, for substantial and strategic support.

This isn't chest beating nationalistic pride talking. This is real experience I share. I should know. I was there. For four entire years during the months leading up to and including the invasion of Iraq, not to mention the difficult years that followed, I was there, working as a public affairs liaison -- ensuring that hundreds upon hundreds of U.S. Navy ships crossing the Atlantic and entering the Mediterranean would have a safe port to dock for a few hours -- get refueled, stock up on food and other necessary products, and provide a transit point for personnel coming and going for various reasons.

I personally boarded dozens of vessels and met U.S. Navy officials, Marine sharpshooters who were positioned throughout the vessels protecting the boat from would-be attackers; and military and diplomatic personnel who were responsible for ensuring a safe passage in Greece and one without incident.

In Greece too, the people were opposed to the war. And yes, there was anti-Bush and anti-war sentiment that did get ugly. On the very day of the invasion and the day when a half-dozen US vessels were scheduled to be in Greek ports, the union that controlled the refinery from which we were to get the fuel supply for these vessels called for a 24-hour strike.

After feverish negotiations with government, corporate and private citizens with influence -- this incident passed... without incident. Just like so many other would-be incidents aiming to derail these critical operations that were providing critical support to the U.S. war efforts -- not to mention billions of US$ into the local economy.

But time and time again -- Greek government officials respected the bilateral agreements that were in place with the United States and valued the longstanding friendship between the two nations.

What would have been a logistic nightmare even in peacetime circumstances, trying to move tens of thousands of tons of equipment over the course of several years and using hundreds of vessels -- sometimes through hostile waters -- ended up to be a relatively seamless operation when these vessels were in Greece.

Greece didn't say "no" and drag its feet for months the way Turkey did. Nor did Greece attempt to extort the United States and disguise it as an "aid package" the way the Turks craftily attempted.

As Greece and Greeks had done in every conflict the United States fought in the 20th century... (WWI, WWII, Vietnam, Korea and elsewhere) Greece sided with its friend and ally, the United States -- even (as was the case with the Iraq War) its people were fundamentally opposed to the war.

This shows loyalty... this shows true friendship... This shows that even in diversity and difficulty -- when world opinion and even your own citizens oppose the war, as many Americans did -- Greece sided with its friend and ally, the United States... Because Greece understand what friends and allies really are.

One of the easiest, and most unjust, things to do in life is to take a loyal and steadfast friend for granted. Greece may not presently be one of our "cool" friends at the moment in light of all of its problems -- but as a nation, we would be turning our back on our own ideals if we forgot her loyalty to the United States. Greece has been sacrificing blood and treasures side by side with the United States for a century now. We should never forget that loyalty. 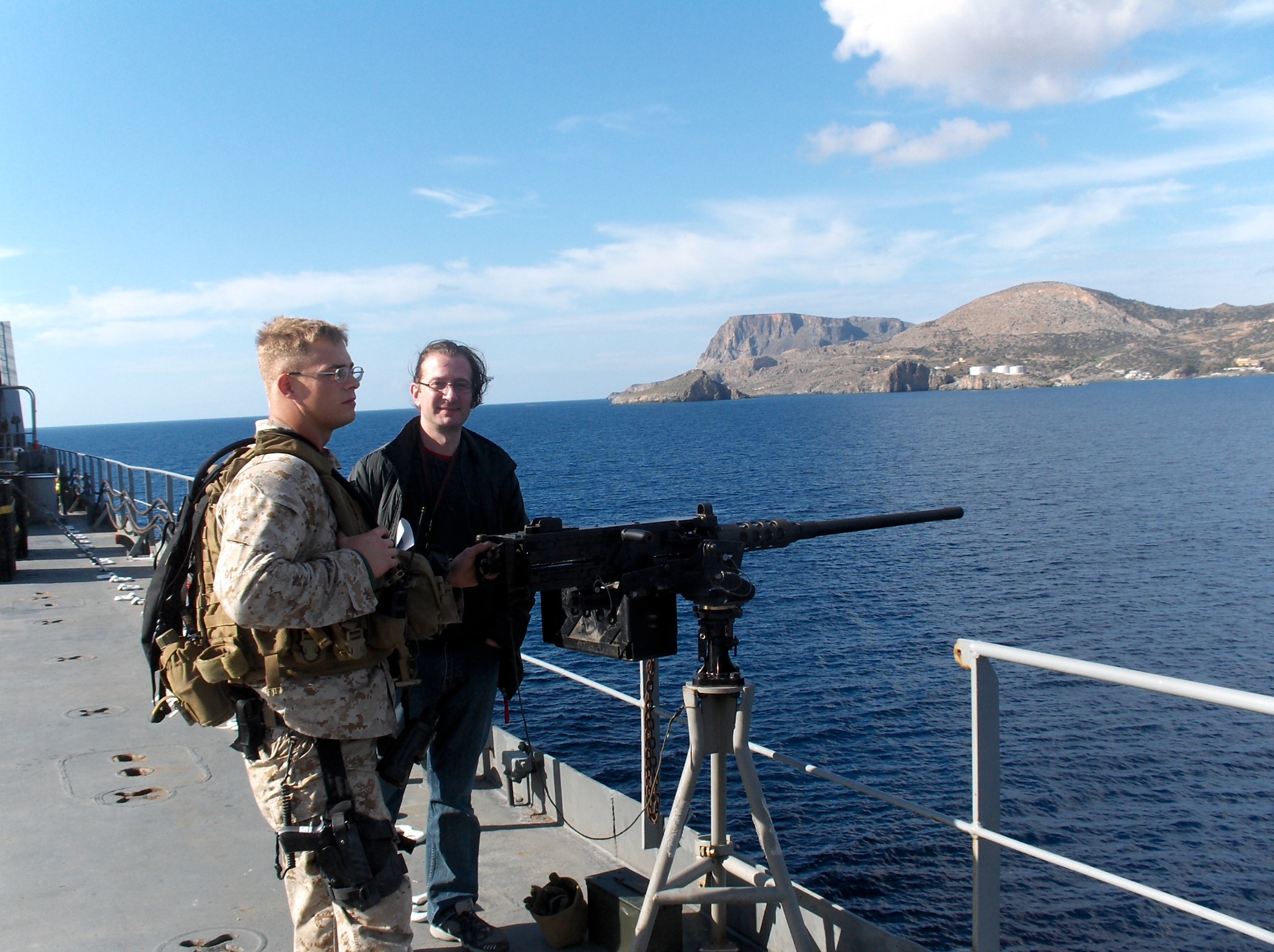 Photo caption: That's me onboard a U.S. Navy vessel a half-mile off the southern coast of Crete during critical refueling operations during the Iraq War. That's a U.S. marine patrolling the coast of Crete in the background. This happened hundreds of times between 2003-2006 in Greece where U.S. vessels navigated through welcoming waters in Greece, when Greece proved her friendship and loyalty to the United States.