WASHINGTON -- It was Christmas night when Sincere Smith, 2, found his father’s loaded gun on the living room table of their Conway, S.C., mobile home. It took just a second for Smith’s tiny hands to find the trigger and pull. A single bullet ripped into his upper right chest and out his back.

His father, Rondell Smith, said he had turned away to call Sincere’s mother, who had left to visit a friend. His back was turned to the toddler, he said, for just that moment.

Sincere was still conscious when his father scooped him up and rushed him to the hospital, just a few minutes away. 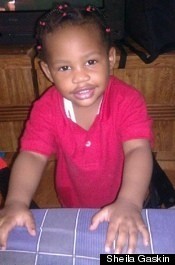 Eleven hours earlier, Sincere Smith had woken up to Christmas -- the first that he was old enough to appreciate. His father remembered their last morning well -– his son ripping through wrapping paper, squealing with delight with each new gift -- his first bike, a bright toy barn.

It was quite a sight seeing Sincere so happy around a cloud of crinkled wrapping paper. “We bought him a little barn thing,” Smith said. “He knew what a barn is. He just seen it -– ‘Oh Mommy, Daddy! Barn!’ He went crazy over it. … He lit up like a Christmas tree.”

Smith, 30, lit up too. “I just wanted to see him open them up,” he said. His own parents were teenagers when they had him. He had vowed to be there for his five children, giving up college and a possible basketball career to take care of them. With Sincere, he promised his wife he’d be a hands-on parent. He said he considered Sincere his best friend.

The two kept close that day visiting relatives for more presents and a Christmas dinner of chicken and macaroni and cheese. “Everything was normal,” Smith said. “He was happy. Everything was good then.”

Two weeks earlier, Smith had bought a .38-caliber handgun to protect his family after bandits had tried to break into their home. He doesn’t know what to say about the national gun-control debate. He just wants that lost second back. “I would say, man, keep them out of your house,” he offered. “It’s just. Boy. All it takes is a second. Just a second to turn your head. I don’t know, sir.”

Sincere died on an ambulance gurney as he was transferred to a second hospital in Charleston.

He never got to ride his new blue Spiderman bike outside. It sits in the trunk of his grandmother Sheila Gaskin's car. "He didn't get to ride his bike," she explained. "It was cold [on Christmas]. My daughter doesn't want to take it back to the store."

Gaskin lives across the street from her daughter and Smith. She saw Sincere every day of his life. "He hear me coming down the road, my gospel music blasting and he hollering 'Nana!'" she recalled. Now, she said she visits his grave every day. She hasn't gotten a full night's sleep since the accident. "It's just killing me," she said.

After Sincere was shot, Rondell Smith thought about taking his own life, Gaskin said. "It's just not good," she said. "It's not good at all. He just has to stay prayed up. ... That's all he can do is give it to God."

Smith wasn't at Sincere's side when he died in the ambulance. He was being interrogated by the police, who eventually charged him with involuntary manslaughter. His next court date is Feb. 8.

As he was rushing Sincere to the hospital, Smith said he told his son that he loved him. "He couldn't really talk," Smith said. "Last thing I heard him say was, 'Daddy.' He kept trying to say 'Daddy.' Believe me I hear it every day."

There were 29 other shooting deaths across the U.S. on Christmas. A soldier was shot and killed in his barracks in Alaska. A man was murdered in the parking lot of Eddie's Bar and Grill in Orrville, Ala. A 23-year-old was shot at a party in Phoenix. A Los Angeles County Sheriff's Department employee was killed in a drive-by.

A 20-year-old Louisville, Ky., man was shot and killed after walking his sister home. On Christmas Eve, he had posted an R.I.P. on his Facebook page for a friend and former classmate, who had been gunned down that day.

A 10-year-old in Memphis, Tenn., Alfreddie Gipson, was accidentally shot to death by gun purchased by an older brother, who had gotten the weapon after being bullied at school. Gipson was jumping on a bed when the gun slipped out of a mattress. It discharged when his 12-year-old brother tried to put it back, their mother said at a vigil.

There were at least 41 homicides or accidental gun deaths on New Year's Eve. On New Year's Day, at least 54 people died from bullet wounds.

Through Google and Nexis searches, The Huffington Post has tracked gun-related homicides and accidents throughout the U.S. since the schoolhouse massacre in Newtown, Conn., on the morning of Dec. 14. There were more than 100 such deaths the first week after the school shooting. In the first seven weeks after Newtown, there have been more than 1,280 gunshot homicides and accidental deaths. Slate has counted 1,475 fatal shooting incidents since Newtown, including suicides and police-involved shooting deaths, which The Huffington Post did not include in its tally.

A 17-year-old took his last breath in the backyard of an abandoned house in New Orleans. Prince Jones, 19, was found bleeding to death in a 1998 Buick LeSabre in Nashville, Tenn. A woman was slumped over the steering wheel in Houston, the engine still running.

On a Tuesday morning in Baton Rouge, La., police knocked on Alean Thomas' door and told her: "You have a young man dead in your driveway." It was her 19-year-old son. Three days later, a 17-year-old in California was killed visiting family for his birthday.

On a Thursday afternoon in New Orleans' Sixth Ward, Dementrius Adams was murdered on his way to buy groceries for his mother. He was 28 and had a 5-year-old daughter. "He was a hard-working man," his sister said told a reporter. "He was so proud of his job. ... He was a good brother, a good father -- he was a loveable man."

Adams had just been promoted from a dishwashing job to cook at a New Orleans restaurant.

The dead included grandmothers and a 6-month-old. There were police officers and a Texas prosecutor. There was a Bodega worker in Queens, N.Y., and a gas station attendant in East Orange, N.J.

A high school majorette, a college freshman at Auburn University and a man planning to get his GED in Bradenton, Fla., were killed. One victim became Chicago's 500th murder of 2012. Another was his town's 40th. One was found frozen and bloody in an alley -- Tacoma, Wash.'s first slaying of 2013. The victim, a mother, was planning to move with her daughters to Manhattan.

"I am lost, hollow," said the mother of the GED aspirant gunned down at a Chevron station on New Year's Day.

In Newport News, Va., after a shooting broke out, a mother ran outside to protect her two sons, ages 5 and 7. She yelled at one of the gunman and was killed.

A Davidson, N.C., husband murdered his wife, then shot himself. Their 3-year-old daughter was found watching TV in another room.

There were so many drive-bys.

Silly arguments became final arguments. A man was murdered over two broken cigarettes. Another after getting into a spat at a taco truck. Travis Len Massey, 23, was shot and killed by his sister's boyfriend in a family dispute over a missing gun. A 52-year-old Jacksonville man shot and killed a longtime friend over an argument, according to police. When asked what the argument was about, the gunman said he didn't remember, according to a television report.

Alexander Xavier Shaw, 18, put a gun to his head to show how safe it was. "Witnesses told officers that Shaw, his uncle, grandparents and some friends were on the back patio talking when he showed them a .38-caliber revolver," a St. Petersburg, Fla., newspaper account said. The gun accidentally fired, killing Shaw.