A flurry of geopolitical events and geo-economic realities has once again brought the relationship between Saudi Arabia and America into the spotlight. From the sustained plunge in oil prices last year to the death of King Abdullah in January, from the Kingdom's military campaign against the Shiite Houthi rebels in Yemen to its collaboration with Western forces in the fight against the Islamic State group -- many eyes are focused on the precarious but vital relationship between Washington and Riyadh.

Beneath the veneer of PR events like President Obama's recent summit with the Gulf Cooperation Council at Camp David, some analysts are calling for a "restart for a new policy in the Middle East," driven by the U.S. and Saudi Arabia. According to Saudi commentator Jamal Khashoggi, "whatever we had in the past has failed."

Historically, America has treated the Kingdom (and indeed the wider region) as a bucket of oil and a place to sell arms. And in the years since 9/11, Washington has also forged intelligence ties with Middle Eastern countries that it counts as allies in the war against Islamic extremism. But in the wake of the Arab Spring, the West has consistently failed to recognize the crisis of legitimacy faced by Middle Eastern governments. Getting this right could yield an extraordinary opportunity for regional stability and commerce, but it requires a leap of faith as well as the adoption of historical sensitivity.

The Saudi offensive against the Shiite Houthi rebels in Yemen is King Salman's Bismarkian moment. Just as the Prussian statesman skillfully crafted an external war against France to unite the German peoples into a cohesive state during the 19th century, so the government in Riyadh seeks to consolidate power by waging war against external threats and by drawing attention to the "malignant force" that is Iran.

The real war, however, is the war within the Kingdom. It is not against ISIS, as Washington would have it, or al-Qaeda: these millenarian groups fail to provide civil services for the people and will ultimately recede in significance for this reason. Rather, the most crucial challenge to the legitimacy of the Saudi monarchy -- and to ruling families across the region -- is brought by groups like the Muslim Brotherhood, the inheritors of the early Ikhwan.

"The most crucial challenge to the legitimacy of the Saudi monarchy is brought by groups like the Muslim Brotherhood."

At the turn of the 20th century, Ibn Saud -- the founder of modern-day Saudi Arabia -- consolidated power across the Arabian Peninsula with the help of adroit warriors called the Ikhwan. In 1926, Ibn Saud took the Kingdom of Hejaz, which included Mecca and Medina, and effectively became the custodian of Islam's two holy mosques. (To this day, one of the king's titles is Custodian of the Two Holy Mosques).

However, a year later, the first decisive challenge to the Saudi monarchy emanated from the ferocious warriors that actually helped to create the state. The Ikhwan declared that Ibn Saud's preferences for the telephone, motorcars and radios were corrupt and informed by the devil. Although the new head of state swiftly quashed the rebellion, it is important to note that the Ikhwan's uprising was voiced in the language of a movement against modernity.

In its attempt to impose the 7th century on the 21st, ISIS employs this reactionary marketing today. Crucially, however, this millenarian ideology fails to present a real and lasting challenge to the civil services that can be provided by a state or a community. Despite all of its terror and brute force, ISIS neglects to provide meaningful social services for the peoples in the lands it conquers. For example, shortly after overtaking Mosul, ISIS overthrew the existing infrastructure in the city. However, it is still dependent on the federal government to pay salaries for doctors and teachers, among others. Ultimately, this is perhaps why ISIS will eventually be defeated.

The Muslim Brotherhood represents the real challenge to the internal stability of Saudi Arabia and some other Middle Eastern governments. The ongoing financial support by the UAE and Saudi Arabia for Abdel Fattah el-Sisi's government in Egypt is a clear indication of the desire to thwart the growth of the Brotherhood. Even while oil prices are so low -- and many economists question the fiscal health of the GCC countries -- the UAE has agreed to finance an entirely new administrative capital east of Cairo.

The willingness to sustain such a level of funding speaks volumes: it is a true symbol of support for the military coup that overthrew Mohammed Morsi's Brotherhood government. It is a complexity that Washington ignores at its peril. After all, it would be simpler for ISIS to be the clear and present danger -- and more consistent with America's often black-and-white, fear-based view of the Middle East.

How Washington can help

The single greatest thing that Washington can do for a regional "restart" is to enable governments to provide a vast array of social services for their people. It can do this by encouraging a deepening and widening of the private sector and economic diversification beyond fossil fuels. This entails a phasing out of the oil, gas and guns mentality, giving way to supporting commercial partnerships in growth sectors such as health care and technology.

For resource-rich countries such as Saudi Arabia, this means encouraging diversification beyond oil and gas, and enabling Riyadh to spur growth in the private sector. Radically stated, it means acting upon faith that commercial prosperity for all people is a borderless activity that can blossom beyond the bounds of Western democracy -- and that such blossoming is vital for economic security and stability in the Middle East.

Why is this a leap of faith? Because it means that Washington must embolden governments that are not built in America's likeness. It entails recognizing that Middle Eastern countries may be modernizing -- but not westernizing.

"Washington must recognize that Middle Eastern countries may be modernizing -- but not westernizing."

To modernize too quickly (and indeed, to be seen to be westernizing) invites a backlash and a direct challenge to legitimacy, just as Ibn Saud's fondness for motorcars and telephones spurred the Ikhwan uprising almost a century ago. And much to the West's chagrin, to modernize and privatize may involve tacking away from the Washington consensus: a feat exemplified by countries like Singapore and China with marked, if erratic, success.

Saudi's rulers are shrewd. Above all -- and beyond the custodianship of the two holy mosques -- they are gatekeepers to a fifth of the world's conventional oil reserves and directors of one of the most astutely run global companies, Saudi Aramco.

But Saudi's rulers also know that beyond their sheer natural resource wealth, they have untapped human resources. In particular, the country's growing population of educated women is a major asset. Jobs for women in Saudi Arabia will be created steadily, if slowly. America can help.

One bright spot of potential for female employment is through call centers. As India passes the torch to the Philippines for the largest call center hub in the world, call-based customer service is a career that women in Saudi Arabia can pursue from the privacy of their own homes. And, in the country with one of the fastest-growing rates of diabetes in the world, there are immense opportunities for women to serve as nurse practitioners.

"Jobs for women in Saudi Arabia will be created steadily, if slowly."

With Aramco Chairman Khalid al-Falih installed as the new minister of health, we are likely to see greater importance placed on healthcare in the Kingdom, presenting a vast commercial opportunity for foreign companies -- and one that is more profitable for people than arms sales.

By enabling Middle Eastern governments to expand their support of civil services -- and alleviating the fiscal burden of public spending by encouraging growth in the private sector -- the U.S. can actually work towards mitigating risks and expanding opportunities in the region. The ability to generate and sustain one's own income and economic livelihood engenders the sense of feeling safe and secure. By uprooting this impetus from internal challengers and helping governments to jumpstart the process, America can actually embark upon a winning strategy for the region that supports the greater good, beyond the existence of any state or non-state bogeyman -- real, fictitious or perilously magnified.

How the U.S. Can Actually Help the Middle East
Tributes to King Abdullah of Saudi Arabia 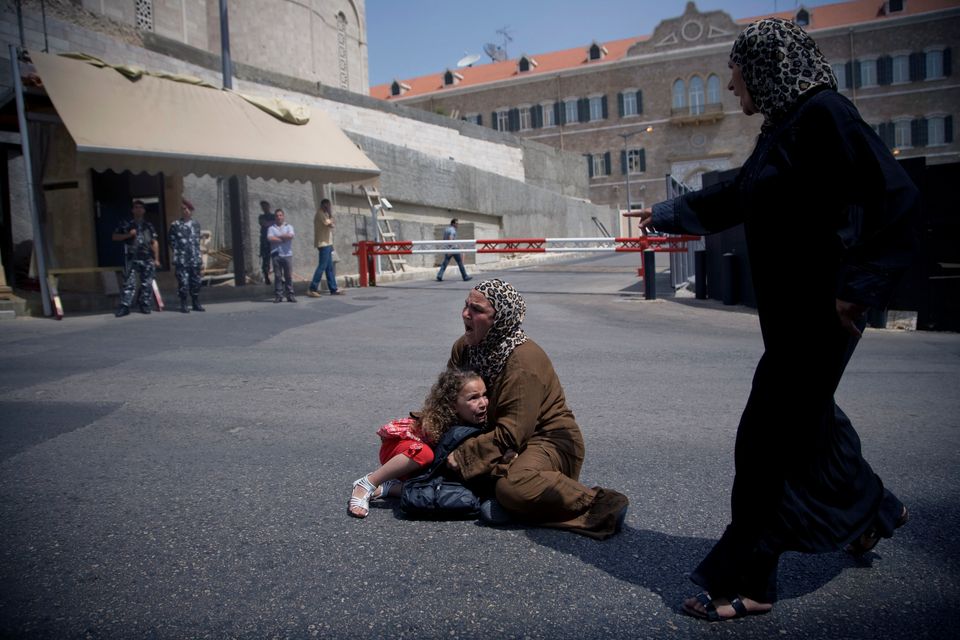 1 / 9
<i> "He will be remembered for his commitment to peace and for strengthening understanding between faiths"</i> <br> - David Cameron
Samira Rahmoon, center, the wife of Lebanese TV psychic Ali Sibat who was arrested by the Saudi religious police in May 2008 and sentenced to death last November on charges of practicing witchcraft, tries to block the road with her daughter Jamal, appealing for her husband's release just months after he escaped a sentence of beheading.
ASSOCIATED PRESS