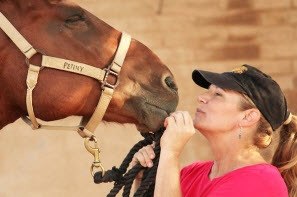 Last year, the federal appropriations bill for 2015 renewed a ban on the use of tax dollars for inspections of horse slaughterhouses, keeping the vile horse slaughter industry from operating anywhere in America... for a time.

This September, that ban expires, putting horse slaughter facilities once again in a position to potentially reemerge in America, and putting the burden on Congress to reinstate its temporary halt.

Even when horse slaughter plants were allowed in the U.S., tens of thousands of horses were still exported annually for slaughter, and several thousand were actually imported for slaughter.

During those long-distance trips, horses are treated as if they're already dead, kept in crowded containers and denied adequate food, water, and rest. According to the USDA, 92 percent of these horses are in good physical condition and could go on to lead productive lives in loving homes.

Horse slaughter is also a threat to human health because horses are routinely given hundreds of drugs and other substances during their lives that have not been approved by the FDA for use in animals intended for human consumption.

So we're asking you to tell your legislators -- especially if your representative sits on the House Appropriations Committee -- to continue the ban and prevent this cruel and environmentally devastating industry from establishing roots in America. In 2011, when this restriction was not renewed, the dormant U.S. horse slaughter industry wasted no time trying to set up slaughterhouses in several states.

But we shouldn't have to hold our breath every year while the fate of our horses hangs in the balance. So urge your Congressperson to also support the Safeguard American Food Exports (SAFE) Act of 2015 (H.R. 1942; S. 1214), which would permanently ban the slaughter of horses for human consumption in the U.S., as well as prohibit the export of horses to other countries for slaughter.

Horse rescues and sanctuaries are doing their part to spread awareness and save lives. In April, more than 100 equine welfare organizations from over 33 states celebrated Help a Horse Day, including 53 organizations which participated in the ASPCA Help A Horse Day grant contest, our annual competition to recognize the most effective and creative tactics in helping at-risk horses.

The winning organizations, which were announced this week, employed a wide range of creative strategies, but all were dedicated to the same goal: protecting American horses.

This dedicated effort illustrates the fundamental position horses hold in American culture. But they also play a seminal role in ASPCA history. Nearly 150 years ago, ASPCA founder Henry Bergh stopped a cart driver from beating his horse, resulting in the first-ever successful arrest for horse mistreatment on April 26, 1866.

Bergh famously wrote: "Day after day I am in slaughterhouses ... lifting a fallen horse to his feet, penetrating buildings where I inspect collars and saddles for raw flesh, then lecturing in public schools to children, and again to adult societies. Thus my whole life is spent."

The protection of horses has been a core part of the ASPCA mission ever since, including our support of equine welfare legislation, public advocacy, training, horse rescue, and targeted grants.

The work continues because it must. As the profit-driven horse slaughter industry tries again and again to reestablish its operations in America -- spreading myths and misinformation to make the cruelty seem practical and even humane -- we need to keep them in check.

Prohibiting slaughterhouse inspections is a start, but more comprehensive equine protection is a necessary finish. Our horses deserve it, and our humanity should demand it.