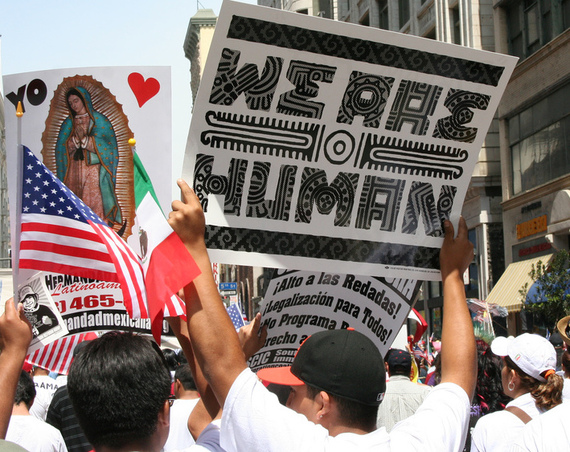 Evidence of increased mass-scale deportations since the beginning of Obama's Presidency -- often in violation of immigrants' human rights -- are significantly harming U.S. regional standing in organizations such as the OAS. While the U.S. is keen to act as the harbinger of change in human rights policies of Latin American states, it fails to fully abide by its own standards and criteria.

In the 2012 presidential debate, President Obama vouched to protect immigrants residing in the U.S., preserve the right to family unity and embark on comprehensive immigration policy reform. Despite his strong-worded promises, Obama has largely betrayed the very Latin American voters who make up his support base, with immigrant deportations surpassing the two million mark since 2008, by far the greatest number of any previous administration.

Stalled immigration reform and the continuation of a policy that largely violates the human rights of immigrants does not bode well for U.S. regional standing in organizations such as the Organization of American States (OAS) and its human rights pillar, the Inter-American Court of Human Rights (IACHR). The IACHR is largely seen by many of its members as a tool of U.S. influence and over the past years there have been several calls for reforms from its members. While there are other far more severe U.S. human rights abuses that one can point to, such as Guantanamo Bay and drone strikes, recent outrage over the intensification of human rights violations under Obama's immigration policy is certainly cause for concern.

After arriving in office promising large-scale immigration reform, Obama instead chose to narrow the scope of immigration enforcement to focus on the most dangerous criminals. However, statistics have shown that this is simply not the case -- two thirds of the two million deported individuals concerned were arrested for minor and non-violent offenses, such as traffic violations and possession of marijuana for personal use, and did not previously have criminal records.

The administration's policy, which includes immediate deportation of immigrants who are illegally re-entering the country, even if it is to reunite with family members, has successfully destroyed the livelihood of many immigrant families residing the U.S. Referred to as the "deporter in chief", Obama has been accused by a Hispanic civil rights organization, the National Council of La Raza, as well as Amnesty International, of denying immigrants the right to family unity. TRAC immigration agency found that, in 2013, a mere 12 percent of those deported had level one offenses, classified as sexual assault, kidnapping and homicide.

Human rights watch underlined the importance of family unity when condemning U.S. immigration policy. "In the world of human rights, family is seen as the natural and fundamental group that deserves protection" and despite promises for U.S. immigration reform, family unity is not viewed with much importance in the country. The organization argues that for future reform, judges should be able to take into account family unity in light of minor or old criminal convictions. As the system stands now, even those immigrants whose children are U.S. citizens and who have been perfectly law-abiding members of society and pay taxes can face deportation and separation from their family, often for life.

The case of solitary confinement

U.S. mass deportation has seen a sharp increase in the immigration detention population, up 85 percent in 2005 (approximately 34,000 are held in detention each day) out of which 300 individuals a day are held in the brutal circumstance of solitary confinement. Almost half this number are held for over 15 days, a duration that increases the risk for mental damage of an inmate. This Immigration and Customs Enforcement practice is shocking, given that most detainees are being kept on civil charges and therefore are not supposed to be punished.

Amnesty International has criticized solitary confinement as one of the worst forms of detention as detainees are deprived of any sunlight for 23 hours a day causing individuals to become depressed, paranoid and suicidal. It has largely argued for a reform of the U.S. immigration system to search for alternatives to this kind of cruel detention and ensure international human rights principles.

Inhume and degrading treatment of detainees, especially toward immigrants who often have no legal counsel, has attracted the attention of Juan Mendez, the UN rapporteur on torture. Mendez condemned U.S. use of solitary confinement, calling it "in breach of its obligations under the torture convention."

While Obama vowed to protect immigrants from large scale deportations, it appears that these speeches were filled with empty words, when now more than ever nondocumented immigrants are facing mass deportation, solitary confinement and family suffering. This failure to reform immigration policy to make it more humane, has highlighted to the rest of the region that "Washington lacks the moral authority to establish itself as a model on migration and respect for human rights".

The US domination of the IACHR has been consistently judged by its smaller members as political intrusion in the Latin American region. Ecuador, Venezuela and Nicaragua have argued that, while the U.S. jumps at the chance to comment on human rights, it has not ratified the American Convention of Human Rights itself, ensuring that the IACHR has no jurisdiction in American territory despite being located in Washington, D.C.

Latin American members are increasingly demanding changes to the status quo of the IACHR, which is failing to appropriately address the needs of Latin American democracies. According to President Correa, the system focuses too much on freedom of expression and protection of capital, rather than on the promotion of human rights in the region.

If the U.S. is to remain respectful within the organization, immigration reform should be a key priority, one that will favor the human rights of immigrants over mass deportation. Signs of withering influence has already begun to appear, as is evidenced by the removal of USAID from Ecuador, six months after the agency was already asked to leave from Bolivia.

Demonstrating the ability to reform, as well as becoming a signatory of the American Convention of Human Rights, will signal to OAS members that the U.S. is committed to protection of human rights in the region and is capable of addressing the challenges that Latin American democracies face.