The United States has long been considered a land of immigrants -- a place where most of the population can trace its ancestry to a different country, with people coming from every part of the globe. Most Americans believe that diversity, at least in principle, contributes to a melting pot of ideas and cultures that makes everyone stronger. But as much as the U.S. prides itself on welcoming immigrants from around the world, the immigration system is rife with problems.

Those problems have come to the forefront in American politics over the past several years, with a sharp divide among Americans who fear immigration threatens their way of life and those who consider it an important building block of society. There are efforts to maintain English-only government resources and ensure jobs draw from Americans first. Many vilify undocumented immigrants -- those who are in the country without legal status -- saying they're taking jobs and resources when they're not supposed to be here in the first place.

Yet more recently, politicians in both parties have come to see anti-immigration posturing as detrimental -- to their own electoral prospects in an age in which Latino voters grow more numerous, and also to the economic vigor of the country. With the politics seemingly ripe for success on immigration reform, the Obama administration and members of the U.S. legislature have pushed to change the system.

The aim is to alter most major tenets of the immigration system. Legal immigration would be reformed to allow in workers with different skills instead of giving visas to so many people based on their family ties in the United States. The enforcement system would be changed to ensure the unauthorized immigrant population doesn't swell again. And many want to make sure that some of those who are already in the U.S. without authorization can find a way to stay if they pass a background check, pay taxes, learn English and meet other criteria.

Most everyone agrees with the broad strokes that something should be done. The big question now is how politicians will actually do it -- if they do anything at all.

Here's a breakdown of some of the problems in the immigration system in the U.S., and where the debate stands on how to fix it.

Unauthorized immigration is also a problem.

Undocumented immigration -- when people come to the U.S. without authorization -- was on the decline during the recession, but it appears to be creeping up again, according to the Pew Research Center's Hispanic Trends Project. There are an estimated 11.7 million undocumented immigrants in the U.S., which can have all sorts of negative effects. It's bad for the government, which can't keep track of exactly who is in the country and must spend huge amounts to detain and deport people. It's bad for undocumented immigrants themselves, who are at constant risk of being deported or exploited by employers. It's bad for businesses that follow the law by hiring legal workers and must compete with those that spend less on undocumented ones. Most people agree that all of this needs fixing. 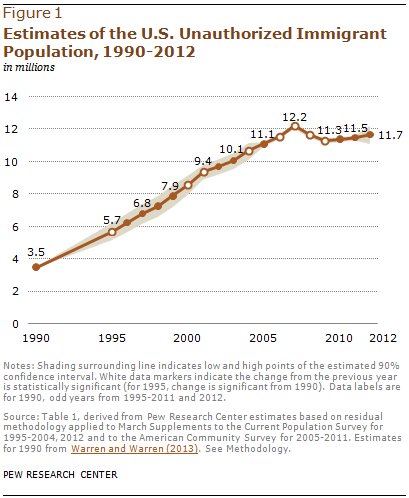 What happens to those undocumented immigrants if they're caught?

It depends. Many of them are detained and deported. Some, such as young undocumented immigrants who came to the U.S. as children, get reprieve from deportation, but they remain at risk of being forced to leave in the future. Removals of immigrants increased to record numbers under President Barack Obama's watch, but dropped to about 370,000 in the 2013 fiscal year. Some of the people being deported are criminals or are being caught at the border and turned away -- but many have been in the country for years. Some have U.S. citizen children here who would either have to leave the country or be left behind if their parents were deported. Again, not ideal!

How are all of these people getting to the U.S.?

Many people are worried about immigrants coming into the country without authorization -- and they're not wrong. Although more resources have been devoted to border security, it's still not fully secure, nor are systems to make sure people who enter the country legally leave when they're supposed to. Some people cross the border illegally, but about 40 percent of the undocumented population came to the U.S. legally and just didn't leave.

What about the cost?

Detaining and deporting people is extremely costly, and even those who support more deportations admit that deporting everyone isn't feasible. Plus, some reports have found that enacting reform could improve the economy, which means the U.S. could be losing money in two ways by maintaining its current policies. The Immigration Policy Center, the research arm of the advocacy group American Immigration Council, breaks down some of the numbers: 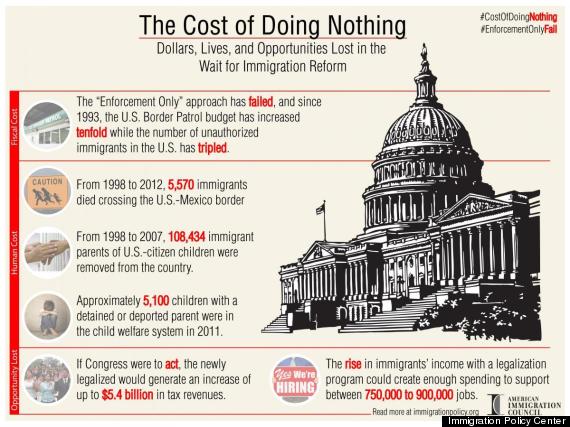 Is anyone doing anything about this?

Some people are trying to. President Obama said that he'd make immigration reform one of his top priorities in 2013, and he tried to walk a fine line to follow through on that: giving speeches and exerting pressure, but not so much as to upset the delicate negotiations happening in Congress.

That worked in the Senate. Four Republicans and four Democrats teamed up last year to write a bill that they hoped both parties could get behind: massive increases in spending for border security, changes to the legal immigration system and policies to allow undocumented immigrants to eventually become citizens. The Senate passed its bill in June 2013 in a 68 to 32 vote. Every single Democrat supported it, as did 14 Republicans -- a pretty good show of bipartisanship in the usually fraught body.

That was months ago. What's happened since?

A bipartisan group of members from the House of Representatives was working on reform, too, but those efforts stalled. And House Speaker John Boehner, a Republican, said he wasn't interested in holding a vote on the Senate-passed bill, or legislation put forward by Democrats in the fall of last year.

The House Republican leadership released principles with a plan for immigration reform in late January, but there haven't been any bills or votes since.

What about the people being affected by all of this?

They're largely out of luck. Until Congress passes some type of immigration reform, the Obama administration says there's not much it can do to prevent large-scale deportations. There have been reforms from within the system, but people are still being deported every day. Some businesses take advantage of workers' undocumented status to exploit them. Others say they can't find enough legal workers who will take the jobs that undocumented workers are willing to do.

Won't there be political repercussions?

The timing of the current immigration debate isn't a coincidence. Republicans have been hurting -- badly -- with Latino voters, and the 2012 presidential candidate, Mitt Romney, lost among those voters to Obama by significant margins. That can't be totally attributed to immigration, of course, but Latinos are more likely to know an undocumented immigrant or care about the issue, and many of them didn't appreciate their friends, family or neighbors being demonized by Republicans. The Latino population is growing, and if current voting trends continue, it's very bad news for the GOP. The polling firm Latino Decisions found last July that many Latino voters would have a diminished view of the Republican Party if the House blocked a path to citizenship for undocumented immigrants: 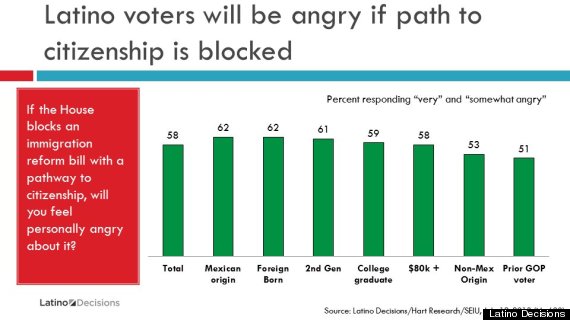 There are many Republicans who recognize this. But there are plenty who either don't recognize it, or simply don't care. While demographic trends are a concern for presidential elections and statewide ones (races for governorships or the Senate), they're not a priority for most members of the House of Representatives. For many of them, it's better politically to push back on immigration reform, even if others argue they should support it for the good of the party. And right now, it's up to the House of Representatives to make something happen.

That's still very much up in the air. House Republicans put forward a set of principles with a plan for reform, but it was only one page long and short on specifics. They might vote on bills. But they might not. If the House declines to hold votes, immigration advocacy groups have vowed to make sure voters, especially Latino ones, don't forget it.

Obama would face severe pressure, too. Since deportations would continue, the president would need to determine whether he should -- or even could -- do something to minimize them among people who would have been allowed to stay if reform had passed. He has argued he doesn't have the power to halt deportations broadly, but also said he would consider his options if he needed to. He's hoping he won't need to.

Ultimately, almost everyone agrees the status quo is unacceptable. So if reform doesn't happen soon, it likely will eventually. In the meantime, it's all pretty messed up.