It might have taken a near-historic recession for many Americans to notice our country's rapidly rising levels of income inequality, but the gap between rich and poor has finally gone mainstream, with bloggers, economists and policymakers of all stripes spouting theories on why we should or shouldn't care.

And while the debate continues over cause and consequence, that central claim has proven unshakable: the gulf between the wealth of America's richest and poorest is widening, and few signs show any indication of it slowing.

"Economists are not sure how to fully explain the growing inequality in America," Nobel Prize-winning economist Joseph Stiglitz writes in a new piece for Vanity Fair this week. "But one big part of the reason we have so much inequality is that the top 1 percent want it that way."

While it's unclear whether Stiglitz is correct about the intentions of the super-wealthy, what's certain is that the rich have emerged from the rubble of the last 30 years as indisputable winners. Since 1980, middle-class wages have largely stagnated and lower-class wages have declined, while the upper echelons of American society have seen a windfall. A study by University of California, Berkeley professor Emmanuel Saez found that, as of 2007, the top decile of American earners pulled in 49.7 percent of total wages, a level that's "higher than any other year since 1917."

Not all economists agree income inequality is a bad thing. Along with the rising gap, some argue, we've received cheaper goods, longer life expectancies and a generally higher standard of living. Perhaps, argues George Mason professor of economics Tyler Cowen, inequality is less an indication of struggling workers at the bottom than the result of a small section of brilliant businessmen at the top.

"The root cause of income inequality, viewed in the most general terms, is extreme human ingenuity, albeit of a perverse kind," Cohen wrote in an article for The American Interest earlier this year. "That is why it is so hard to control."

The below infographics on income inequality by designer Kristy Tillman for Objects in Repeat are based on the data set "20 Facts About U.S. Inequality That Everyone Should Know," from the Stanford Center for the Study of Poverty and Inequality. The graphics come via Fast Company's Co.Design, which hosts an array of illuminating infographics.

PHOTO GALLERY
15 Facts About Income Inequality That Everyone Should Know

Data and copy credit: Stanford Center for the Study of Poverty and Inequality 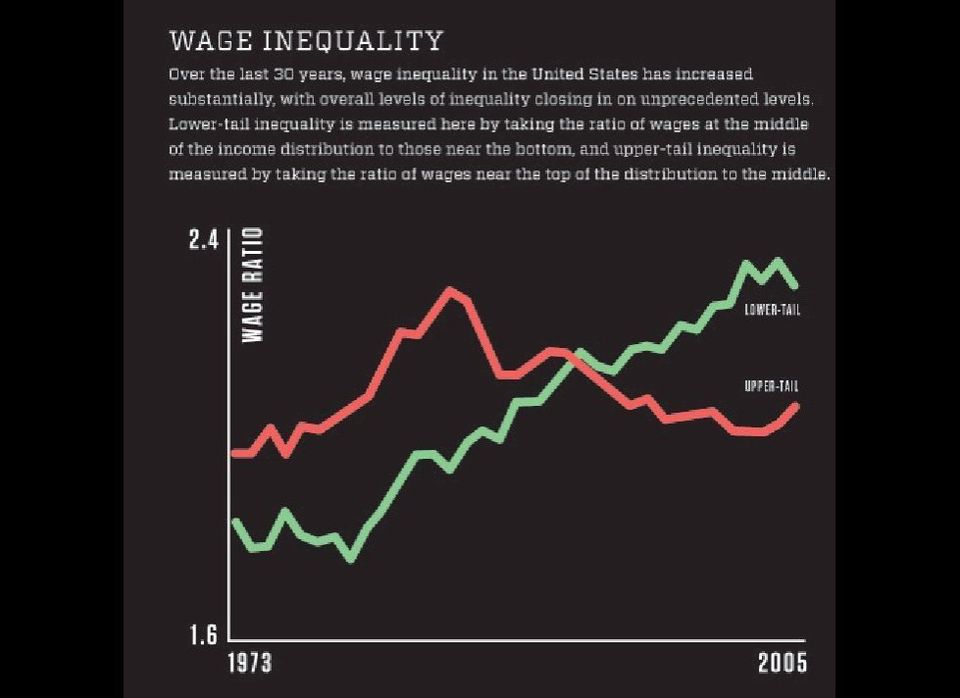