The United States' global rank in infrastructure has dropped off considerably from where it was four years ago, both in absolute and relative terms, according to a recent report.

U.S. infrastructure ranked 14th in the world this year, a full seven slots lower than it was in 2008, according to the Global Competitiveness Report for 2012-2013, which was released earlier this month by the World Economic Forum. The country's overall score had dropped from 6.10 in 2008 to 5.81 this year, where 1 is extremely underdeveloped and 7 is a top score.

The news comes as word spreads about the collapse of the Interstate 5 bridge in Washington State, which fell into the Skagit River on Thursday night, sending at least two cars into the river and at least three people to the hospital. Another 700 bridges in the state have even worse sufficiency scores than the bridge that collapsed, according to the AP. Investigators speculate a truck with an over-sized load caused the structure to buckle.

The news is likely to revive debate around the country's aging infrastructure and the need to invest in upgrading outdated roads and bridges.

A chart created by Joe Wiesenthal shows public construction spending as a percentage of GDP is lower than it's been in over 20 years, after a big uptick before the recession. 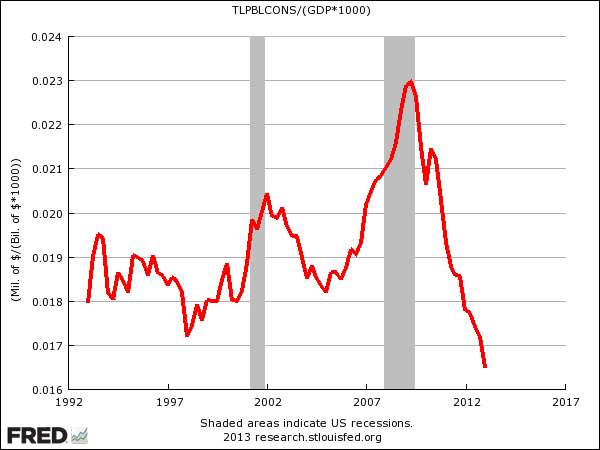 One of the reasons for the drop off is that states and local governments have historically provided most of the spending for roads, highways and bridges, and given the economic downturn in 2008, they've been forced to pull back on infrastructure spending to balance their budgets. Congress hasn’t made up the difference, despite the 2009 stimulus, which filled a small portion of the gap. The most recent highway bill failed to substantively increase spending on transportation despite a clear need for upgrades.

The U.S. bridges earned a score of C+ in the American Society of Civil Engineers 2013 report card, and just this week the society's Seattle section gave the state's bridges a C-minus "due to a lack of planned funding and inadequate maintenance," as Seattle Weekly noted.

Wonkblog's Brad Plumer suggests now would be a wise time to invest in repairs, as borrowing rates for Congress are remarkably low and fixing crumbling infrastructure only gets more expensive with time.