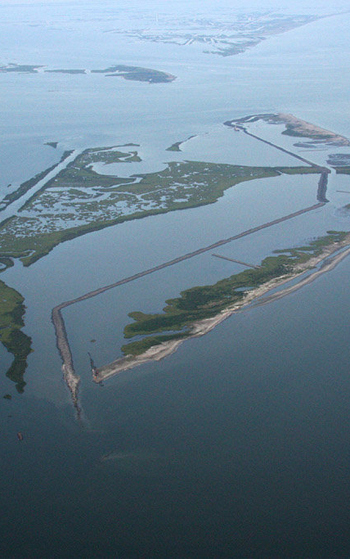 Five cities, both large and small, and eight states were winners of the first-ever National Disaster Resilience Competition (NDRC), which was organized by U.S. Department of Housing and Urban Development (HUD) and the Rockefeller Foundation. Communities impacted by major disasters in the past few years will receive $1 billion to develop "resilient infrastructure and housing projects." While many projects boost resilience for coastal or river communities, there are also inland projects that aim to protect communities against fire and flooding. A majority of the projects include multi-use green infrastructure -- systems that both provide flood prevention and control and public green spaces. Winning projects also focus on transit, housing, and jobs. Some 40 communities submitted proposals.

In a conference call, HUD Secretary Julian Castro said this investment in resilience will help communities become "safer, stronger, and richer" as they adapt to climate change. "Climate change is the great challenge of the 21st century." The past few years, he said, have seen "extreme and devastating drought, wildfires, flooding, and tornadoes." And with 2015 now just confirmed as the hottest year on record, extreme climate events will only get worse.

Here's a brief overview of the state and city winners, organized by the amounts they won:

Virginia: $120,549,000 for the Ohio Creek Watershed and Coastal Resilience Laboratory and Accelerator Center, which will develop "distributed green infrastructure projects, such as rain barrels and gardens, and combine them with coastal shoreline development to address flooding due to storm surge and torrential rains."

Iowa: $96,887,177 for the Iowa Watershed Approach, an innovative program that seek to create local "watershed management authorities" that will assess hydrological and watershed conditions and create management plans that can result in a more sustainable agricultural system.

Louisiana: $92,629,249 for its Louisiana Strategic Adaptations for Future Environments Program, which aims to protect coastal wetlands, retrofit communities threatened by flooding, and reshape high-ground areas. The funds will also help a tribal community on Isle de Jean Charles, whose land has submerged by an amazing 98 percent since 1955, move to a new location.

California: $70,359,459 to pilot its Community and Watershed Resilience program in Tuolumne county, which was hit by wildfires in 2013. The program aims to create a environmentally and economically sustainable model for forest and watershed health that can be rolled out across the state.

Connecticut: $54,277,359 for a pilot program in the city of Bridgeport to test the state's broader Connecticut Connections Coastal Resilience Plan, which seeks to connect "economically-isolated" coastal communities through a mix of green and gray infrastructure.

Tennessee: $44,502,374 for the state's Rural by Nature, a federal, state, and local initiative to create resilient rural communities along the Mississippi River, which will restore two miles of degraded floodplain.

New York: $35,800,000 for public housing resiliency pilot projects throughout the state, which will test efforts to build resilience into low-income multi-family housing.

New Jersey: $15,000,000 for a regional resilience planning grant program, which will help local communities create their own plans to address their vulnerability to flooding.

New Orleans: $141,260,569 for the city's first-ever Resilience District in Gentilly, which will include coastal restoration, new parks and green streets, and workforce development initiatives.

Minot, North Dakota: $74,340,770 for an integrated approach to manage climate change and flooding.

Shelby County, Tennessee: $60,445,163 for its Greenprint for Resilience program, which will build a connective set of green infrastructure projects to increase protection against future flooding while creating trails and recreation areas.

Springfield, Massachusetts: $17,056,880 for an Urban Watershed Resilience Zone, which will focus on jobs, restoring affordable housing, and the creation of a new distributed heat and power plant in the event of a grid failure.

Christian Gabriel, ASLA national design director for landscape architecture at the General Services Administration (GSA) and one of the evaluators of the proposals, argued that the process also encouraged new approaches to deal with these complex, multi-faceted problems: "Great planning and design necessarily cross political and geographic jurisdictions. When multi-purpose projects are conceived from inception as trans-disciplinary, they more effectively act as force multipliers in communities."

He added that the "competition asked proposers to not only provide compelling physical solutions but also propose new working relationships and create resilient models for collaborative work between governments and civil society."

While the $1 billion is truly a drop in the bucket in terms of what's needed, NRDC is an important expansion of the Rebuild by Design competition, which dedicated $920 million to improve the resilience of the communities hit hardest by Hurricane Sandy, as it may show this competitive financing model can work nationally as well. The NRDC involved some 25 federal agencies, including 100 experts, and it took 16 months to review the proposals and select the winners. What's needed in the future is a scaled-up annual process, which is something we hope the next administration will take up.

Many more communities need help with resilience, or there will soon be more Isle de Jean Charles, more looking for a new home.