DENVER -- Nearly 6 tons of raw and carved ivory from well over 1,000 elephants were crushed, removed from the black market in the United States' latest push to combat poaching.

Millions of dollars' worth of intricately carved figurines, bracelets and other trinkets were all fed into a rock-crushing machine Thursday at the Rocky Mountain Arsenal National Wildlife Refuge, rendering the pieces worthless. In as little as 10 years, experts who watched the ivory crushed said, trinkets like those could bring about the extinction of elephants.

"What was once a local or regional problem has become a global crisis," said U.S. Fish and Wildlife Service director Daniel Ashe. "How will we answer the question when our grandchildren ask why there are no elephants remaining in the wild? Will they be proud of us when we say it was more important to own beautiful things than for beautiful things to roam in spectacular places?"

The condemnation of "blood ivory" supports an executive order by President Barack Obama to fight wildlife trafficking. The event also marked the first time in U.S. history that such a large quantity of ivory, stockpiled over 25 years, was destroyed, although selling ivory within the U.S. remains legal.

"We hear a lot about China, and concerns about the trade there are warranted, but the fact is, the United States is the second-largest market for ivory in the world," President and CEO of the Humane Society of the United States Wayne Pacelle said in a statement. "Ivory trade laws in the U.S. are riddled with loopholes ... and smugglers take advantage of this deficiency."

A September report by the Office of the Director of National Intelligence says the illicit ivory trade has grown to $10 billion and is now a major resource to fund crime and terrorism. Reports said activists claim elephant poaching helped finance al-Shabaab, the Somali terrorist group that recently attacked Kenya's Westgate mall.

Poaching also has grown increasingly brutal. Earlier this year, poachers reportedly used cyanide to kill 300 African elephants for their tusks, and some have used night-vision goggles and AK-47s.

African elephants have returned to the brink of extinction after an increase in poaching. According to a recent report by the National Intelligence Council, wildlife trafficking has doubled since 2007 and just last year, about 30,000 African elephants were slaughtered -- the most since the United Nations-backed Convention on International Trade in Endangered Species (CITES) issued an ivory ban in 1989.

CITES relaxed the ban in 1997, however, to allow limited sales of ivory in Zimbabwe and later China. According to Peter Knights, the executive director of WildAid, relaxing the ban resulted in "disaster" and destroying the ivory is the best thing to do.

"People need to understand that this is as heinous a crime as consumption of heroin," Knights said. "We don’t put heroin back on the market after we seize it, so this [crush] is the right thing to do. I think people who say otherwise are people who [support] this theory of legal supply, which we tried for 20 years, they fiddled with it and it was a disaster and we tried it with another release into China and that was a disaster, too, so you have to look at history and you have to learn its lesson." 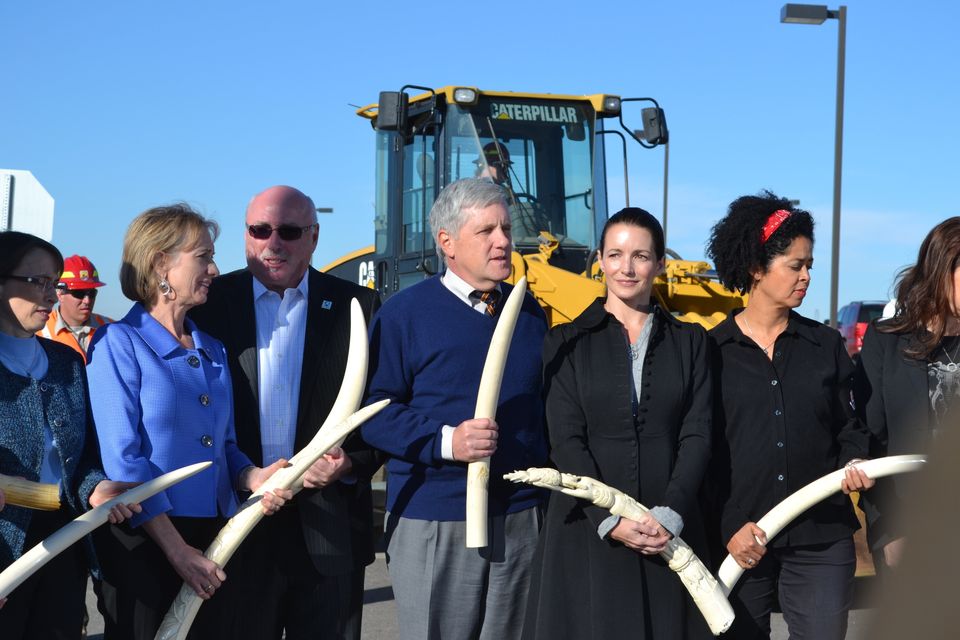 1 / 10
A coalition of actresses, NGOs and government officials hold up ivory tusks before depositing them into a pile for crushing. <em>From left to right:</em> Judy Garber, the principal deputy assistant secretary for the U.S. Department of State; Ginette Hemley, the senior vice president of the World Wildlife Fund; Azzedine Downes, the president and CEO of the International Fund for Animal Welfare; David Hayes, the former deputy secretary and chief operating officer for the U.S. Department of the Interior; actress Kristin Davis (<em>Sex and the City</em>); Dr. Paula Kahumbu, the executive director of WildlifeDirect.
Andrea Rael