Can you imagine that headline? I can't either, particularly if Speer's grandson had devoted much of his life to rehabilitating his grandfather's image, was on record as being sympathetic to Holocaust deniers and had used his political base among Germany's neo-Nazis as the springboard to secure the prime ministership.

Had Speer III, on reaching office, launched a systematic campaign to intimidate and silence media critics, appointed an education minister intent on deleting all references to Kristallnacht and the invasions of Poland and Russia from school textbooks, and begun spearheading an effort to replace the postwar German constitution with a new document that would gut protections for freedom of speech and association while lifting restrictions on deployment overseas of the Bundeswehr, one might have an even harder time picturing John Kerry hosting a private dinner for him at his home in Boston or Barack Obama giving him a personal guided tour of the Lincoln Memorial.

To be sure, while both Speer and Nobusuke Kishi were arrested as war criminals, only Speer was convicted. Kishi was released from prison when the American Occupation decided it was more important that Japan be anti-Communist than democratic. They called it the "reverse course" at the time. 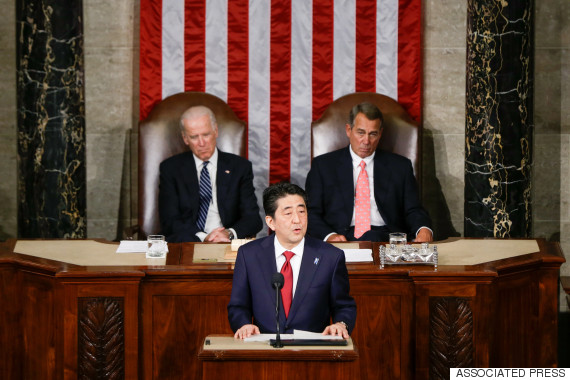 Kishi went on to construct much of the postwar Japanese political order. He helped the CIA channel funds in 1955 to create the Liberal Democratic Party, which is neither liberal nor democratic nor a political party in the way that term is commonly used, but rather a motley collection of factions jockeying to provide political protection for the true power centers in Japan: official and unofficial bureaucracies (e.g. old-line Japanese companies and banks), networks of rural construction firms and agricultural interests, and the unreconstructed right that has never reconciled itself to what happened in 1945.

But even though this "LDP" could not command the support of a majority of the Japanese electorate, it controlled the levers of Japan's parliamentary machinery with one brief hiatus until 2009, thanks largely to the framework that Kishi helped put together.

Kishi's LDP brought about Japan's incorporation into the U.S. defense perimeter in the face of bitter opposition from the majority of the population (Kishi had to call on the police to ram through Japan's parliament the legal foundations of his country's subordination to the Pentagon), and he was rewarded with a state visit to Washington complete with personal attention from President Eisenhower.

Plus ça change. In a brilliant piece in Salon, Patrick Smith wrote of the eerie echoes of Kishi's trip to the United States in 1960 and that of his grandson, Prime Minister Shinzo Abe, last week.

Kishi had built a political order that blocked leftists from coming to power; Abe presided over the resurrection of that order following its most serious challenge ever: the electoral victory in 2009 of the Democratic Party of Japan. Before Kishi midwifed the LDP in 1955 it had looked as if the Japan Socialist Party would almost certainly form a Japanese government; afterwards, there was no chance. In 2009, it seemed Japan was finally getting a genuine two-party system; today, no plausible scenario exists that will see the DPJ take power again.

Kishi had laid the brick of his country onto the wall Washington was constructing in the 1950s to "contain" a supposedly monolithic Communism; Abe has re-affirmed the central position of that brick in the wall, even if the wall's purpose is now more a matter of thwarting China's ambitions than "containing" an ideological competitor.

"The purpose is now more a matter of thwarting China's ambitions than 'containing' an ideological competitor."

Kishi had to contend with hundreds of thousands of angry demonstrators who ultimately forced him to resign his position (although not to surrender the power he continued to wield behind the scenes). Abe has not yet endured that level of protest and appears set to stay in office for years. But he does face an angry and hostile Okinawa, the small, ethnically distinct island between the Japanese mainland and Taiwan that is forced to "host" most of the bases, soldiers, and ear-splitting jets that constitute the American military presence in Japan. (Back in 2006, the LDP promised Washington a new base for the U.S. Marines on Okinawa, but involving as it does the destruction of irreplaceable coral reefs, the last bits of Okinawa's unspoiled coastline, and any viable future for the island as a high-end tourist destination, the base has been implacably opposed by local people). Getting the base built is going to involve tear gas, billy clubs, and tens of thousands of Okinawans pouring into the streets in protest.

Trade issues form another curious echo last week of Kishi's 1960 trip. Kishi's LDP had argued with Washington that if Japan's voters were not to turn left, they had to be able to earn enough dollars to purchase essential imports. The Eisenhower administration agreed; Japanese companies were allowed to sell anything they could make into the U.S. without reciprocal privileges for American firms in Japan. The result worked wonderfully for Japan for some decades, if less so for American workers. But it did leave certain sectors of the Japanese economy -- agriculture, construction, distribution -- cosseted from competition and thus something of a drag on overall productivity.

Enter TPP -- the Trans-Pacific Partnership advertised as bringing all the productivity-enhancing benefits of free trade to its signatories. Getting it through Congress has become a major objective for the Obama White House, but TPP's anti-democratic character -- terms that cannot be disclosed to Congress; unaccountable secret tribunals that can force countries to compensate multinationals for enforcing environmental and labor regulations has generated a storm of opposition.

Obama needs Abe's cooperation to have any chance of success with TPP. The great selling point of TPP to Americans is that will finally open the Japanese market, replacing the understanding that Kishi's and Eisenhower's governments agreed to some six decades ago with a much-hyped "level playing field." Without Japan on board, TPP is little more than show.

But TPP creates something of a dilemma for Abe. Abe's government has been as successful as it has because he has delivered a rising stock market and surging corporate profits with the implicit promise of more broadly based economic growth to come. But to make good on that promise, he is being told he has to go beyond the blunt macroeconomic tools deployed to date -- waves of quantitative easing and fiscal pump priming -- to tackle microeconomic, structural reform. But that means doing something about those sheltered, uncompetitive sectors which happen to form much of the LDP's political base.

Support on TPP in return for an ironclad American defense commitment to Japan, specifically over disputed islets claimed by both China and Japan -- gives him no choice but to alienate those parts of his base. (To date the American position has been not to take sides on the sovereignty question but to imply that the Chinese might face an American military response if they were to attempt anything beyond peaceful negotiations to change the status quo of Japan's de facto possession). TPP thus offers the political cover for the unpopular structural reforms that Abe's neo-liberal advisers are telling him are necessary. (Keynesians who argue that the root of Japan's economic stagnation lies not in this or that uncompetitive economic sector but in stagnant domestic demand have rarely been given a hearing in Japan's policy circles).

"TPP offers the political cover for the unpopular structural reforms that Abe's neo-liberal advisers are telling him are necessary."

The one part of Abe's visit that did not go well was TPP. The opposition he faces in Japan is simply too intense for him to have conceded on the spot all that Obama wanted and needed. But unlike his grandfather who had to return to a country simmering with rage at his having delivered Japan into the arms of the U.S. military as a protectorate in perpetuity, Abe can crow to his right wing base that he has finally released the shackles that have bound Japan's military since 1945 -- all the while procuring American backing in any confrontation with China.

For its part, the American national security state got what it has wanted for decades out of Japan -- "interoperability", to use the Pentagon's favorite buzzword, which translates into the ability to fold Japan's euphemistically termed "Self Defense Forces" into American military planning without having to worry about any Japanese legal restriction.

Whatever the ultimate fate of TPP, this is the key result of Abe's visit. As Smith noted in his Salon piece, Abe returns home with a deal that "contradict[s] the wishes of the electorate" (poll after poll shows that the majority of the Japanese public opposes this "interoperability") that will require "the subversion of the democratic process" (the LDP's plans to tear up the Japanese constitution) -- just as his grandfather did.

Lesson from Ex-PM: Don't Distance Yourself from D.C.

But there is another Japanese prime ministerial trip to Washington that helps shed even more light on what happened last week, albeit because of the contrast rather than the echo. This one took place five years ago rather than 55 when the DPJ's first prime minister, Yukio Hatoyama, visited Washington for a global conference on nuclear security. He was treated with a rudeness and contempt unprecedented in the annals of diplomacy among supposed allies. Hatoyama's election had demonstrated that Japan had passed the crucial test of a democracy -- the peaceable passage of power from one party to another. But that didn't matter in Washington.

"Japan can have good relations with China or it can continue as a pawn in Washington's great power rivalries, but it is not going to be possible to manage both going forward."

What did matter is that he had had the temerity to suggest it was time to review aspects of the security relationship the United States, and had dispatched a mission to China of some 600 leading business and cultural figures led by his most formidable political backer to seek warmer relations with Beijing.

The Obama White House, together with Hillary Clinton's State Department and Robert Gates's Pentagon, made short work of him, providing the LDP with the ammunition it needed to "show" the Japanese electorate that the DPJ was mucking up Japan's most important security relationship and could not be trusted with the conduct of foreign policy.

Seeing what had happened to a Japanese government that attempted even a modicum of distance from Washington, Beijing commenced the series of provocations that led to the confrontation over the islets. The message was clear: Japan can have good relations with China or it can continue as a pawn in Washington's great power rivalries, but it is not going to be possible to manage both going forward.

For the time being, Japan has made its choice -- or rather Abe and the rightist circles around him have made Japan's choice. The United States for its part has demonstrated again that it wants vassal-like protectorates, not allies.

R. Taggart Murphy is professor of International Political Economy in the MBA Program in International Business at the Tokyo campus of the University of Tsukuba, and the author of "Japan and the Shackles of the Past" published in December, 2014, by Oxford University Press.