The United States and South Korea's recent decision to counter North Korean missile capabilities with an advanced system on the Korean peninsula left China "deeply dissatisfied" and ready to take "necessary measures," a defense ministry spokesman said at the end of July.

In the month since the agreement was announced, many analysts have wondered how Beijing's anger will manifest. One common sentiment is that the strategic collateral imposed on China by the missile system, called the Terminal High Altitude Area Defense, may force Chinese diplomats to reconsider their inaction on North Korea's nuclear efforts. Others, fueled by an earlier Chinese warning that THAAD could "destroy" relations with South Korea "in an instant," argue that China may seek to discipline Seoul with economic repercussions.

Such responses fail to encompass the full scope of China's domestic and foreign policy thinking. China will not move in a quick or meaningful fashion to oppose Pyongyang -- Beijing fears destabilizing the Kim regime, which would risk expanding the U.S. presence in the region far beyond THAAD deployment and potentially spur an influx of impoverished North Korean refugees into China. In fact, China's THAAD-inspired refusal to support a U.N. Security Council measure on recent North Korean missile launches suggests that negotiations are even less attainable than before.

Likewise, THAAD deployment damages Chinese trust in Seoul on security issues, but it does not obscure the two countries' growing economic interdependence. While South Korea is asymmetrically dependent on economic relations with China, it is also China's second largest trade partner and a major source of foreign direct investment. Though Beijing will seek to coerce South Korea by publicly considering sanctions, the risk of collateral from major economic retaliation is thus unwarrantable for China, especially in the context of a slowing domestic economy.

How, then, will China respond? As Chinese Foreign Minister Wang Yi recently stated, THAAD is "not a simple technical issue, but an out-and-out strategic one" -- and a strategic military problem will evoke a strategic military response. Countering a powerful missile defense system means more advanced Chinese missiles, with more aggressive deployment.

Little analysis has considered how the THAAD deployment will shape the Chinese military, and media outlets have mischaracterized the impact of the deployment from the Chinese perspective by focusing on the missile-intercepting aspects of the system. This assumption does not account for another major THAAD component -- the AN/TPY-2 radar, which identifies and communicates the location of missile targets to the interceptor. In reality, China's largest concerns come not from the interception component of THAAD, but rather the detection capability provided by the AN/TPY-2. 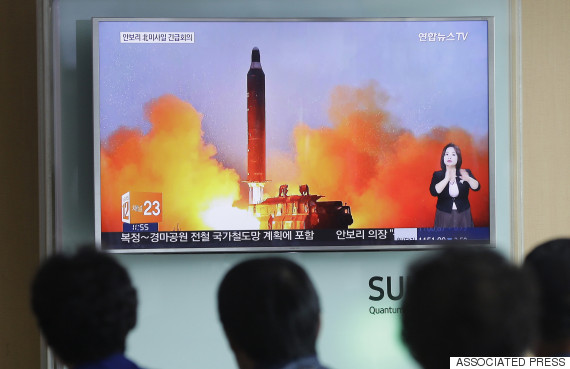 The United States and South Korea have repeatedly asserted that the deployment will be "focused solely on North Korean nuclear and ballistic threats" -- not Chinese missiles. The possibility remains, however, for THAAD's radar to be covertly switched into a longer range mode that feeds into the broader U.S. missile defense -- giving Washington earlier notice of Chinese launches.

Regardless of the Pentagon's intentions, the Chinese perceive the agreement on THAAD as a demonstration that the United States does not value strategic stability with China. Beijing will be motivated to restore its nuclear and ballistic credibility by developing missile technologies that make the AN/TPY-2's early warning potential irrelevant.

China has already tested and reportedly begun deploying small numbers of MIRV-equipped missiles. MIRVs provide China with the ability to inundate late-phase missile interceptors like THAAD, as multiple guided warheads will disperse from a single MIRV missile in the final minutes of its descent. Consequently, the potential strategic imbalances created by bringing THAAD to South Korea are offset, as MIRVs are significantly more difficult to intercept, regardless of how early they are detected.

While MIRVs overwhelm THAAD's interception capabilities, hypersonic gliders empower China to bypass them altogether. HGVs are an emerging breed of ultra-fast weaponry, and China has apparently successfully tested its secret developmental glider, the DF-ZF, seven times. Capable of traveling in unconventional up and down trajectories at speeds far greater than traditional ballistic missiles, HGVs like the DF-ZF will be extraordinarily difficult to detect and intercept with existing U.S. missile defense.

Thus far, China's HGV testing has consisted of medium and intermediate-range demonstrations, perhaps indicating that the DF-ZF is being developed with regional missile defense systems in mind. With the South Korean THAAD deployment potentially informing the broader U.S. architecture, China is incentivized not only to accelerate its development of HGVs, but to expand the program to cover longer range missiles capable of hitting the United States. Once operational, the unprecedented speed of the DF-ZF would effectively neutralize the early warning potential of THAAD radars on the Korean peninsula. 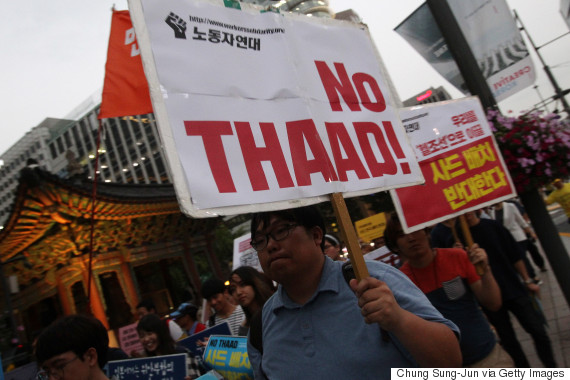 Protesters attend a rally to denounce the THAAD missile system near the U.S. embassy on July 13 in Seoul. (Chung Sung-Jun/Getty Images)

Security analysts currently project China will deploy a hypersonic arsenal as early as 2020, and likely no later than 2025. Now galvanized by the promise of a nearby AN/TPY-2, the impending Chinese sprint to more advanced missiles will increase the odds of deployment at the earlier end of that timeline. Similarly, China is now more likely to convert existing missiles in its nuclear arsenal into MIRVs, subsequently enhancing its ability to override ballistic missile defenses and increasing its number of nuclear warheads in the process.

Of course, China's strategic response to THAAD will not be without limits, the most apparent of which is its transition to a new normal of slower economic growth. Furthermore, China has demonstrated a reigning military philosophy of acquiring, as Jeffrey Lewis recently put it, "a little bit of the best things" -- with missile programs being driven by technological breakthroughs and an eagerness to be seen as a first-rate nation, not strategic necessity.

Such diligence has, until now, afforded China an efficient and increasingly modern arsenal that has avoided the insensible stockpiling and arms races seen previously in the U.S. and Russia. While this paradigm will require a much greater escalation of military tensions to be overturned, the agreement to deploy THAAD to South Korea may mark the first major step in a slow shift towards more strategically mandated Chinese missile development.