WASHINGTON -- Kurdish leader Massoud Barzani, who visited the U.S. for the first time since 2012 earlier this month, believes the U.S. has effectively affirmed its commitment to his region of Iraq, according to his top representative in Washington.

"What I would say the visit achieved was a reiteration of the strong relationship that there is between the United States and the Kurdistan region in Iraq," said Bayan Sami Abdul Rahman in an interview with The Huffington Post the week following Barzani's visit. "It's important that those things are repeated and reiterated because otherwise relationships can grow cold. I'm not saying that it had, by any means, but it's still important to do that."

Rahman noted how the invasion of Iraq by the extremist Islamic State group, or ISIS, last year has made the U.S.-Kurdistan relationship more vital for both parties.

"We and the United States today are fighting ISIS shoulder to shoulder," Rahman said. "The United States is of course providing advice, intelligence, very importantly the airstrikes, and the peshmerga [Kurdish militias] are the ground troops, and I have to say they are the most effective ground force against ISIS anywhere in the Middle East." 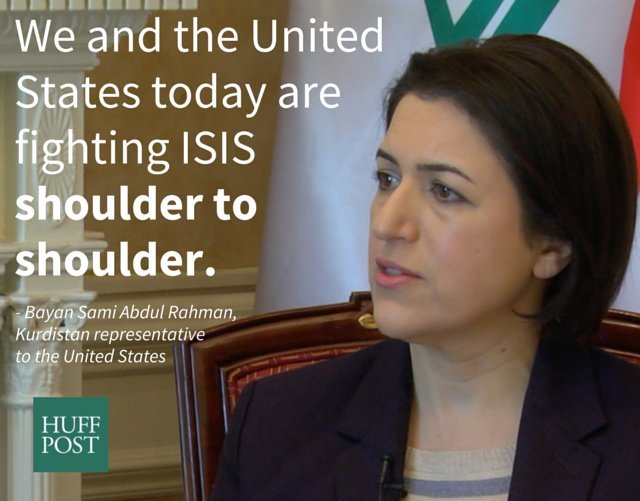 Kurdistan's success following the U.S. invasion of Iraq in 2003 is considered by most analysts a rare bright spot in the otherwise still-fractured country. The region's control of strategic oilfields has brought it wealth and regional clout -- though its continuing hopes for full independence have been an issue in its relationship with the central Iraqi government, with tension peaking last year under controversial former Iraqi Prime Minister Nouri al-Maliki.

The need to defend Kurdistan -- and U.S. personnel based there -- was one reason President Barack Obama cited when he announced in August that he would be entering the battle against ISIS. The administration has since channeled weapons, advisers and air support to the Kurdish forces.

Republican opponents of the Obama ISIS strategy argue that the president is failing the Kurds by declining to send weapons to them directly, rather than through the central Baghdad government. Though the Iraqi Kurds have publicly endorsed that change in policy, Barzani this month declined to criticize the president's approach and instead said he was confident the Obama administration wanted the Kurdish forces to be suitably armed and successful against the extremists.

The Iraqi Kurds have retaken nearly all the territory they lost to ISIS. They are also hosting hundreds of thousands of refugees from across the rest of Iraq and from Syria. They are expected to play a significant role -- though not the lead role -- in future advances by the U.S. and its partners against the Islamic State in Iraq.