LONDON, Oct 11 (Reuters) - The United States will become the world's largest oil producer next year - overtaking Russia - thanks to its shale oil boom which has transformed the global energy landscape, the West's energy watchdog said on Friday.

The prediction comes only days after estimates by the U.S. government showed the United States, the world's largest oil consumer, has ceded its ranking as top global oil importer to China, thanks to the shale revolution cutting import needs.

"The United States' place in the driver's seat of growth is also a throwback to decades past," the International Energy Agency said in its monthly report.

The U.S. resurgence as an oil producer is already reshuffling the cards in the game of world energy diplomacy, playing it a new hand in relations with long-term ally and top OPEC producer Saudi Arabia.

Major producers such as Russia are now forced to invest billions of dollars into new pipelines towards Asia as they can no longer rely on demand from the West, and have to deal with increasingly assertive Beijing.

"With output of more than 10 million barrels per day for the last two quarters, its highest in decades, the nation is set to become the largest nonOPEC liquids producer by the second quarter of 2014, overtaking Russia. And that's not even counting biofuels and refinery gains," the IEA said.

The agency, the Paris-based energy arm of the Organization for Economic Co-operation and Development (OECD) estimated that U.S. liquids production will average 11 million bpd in 2014 versus 10.86 million in Russia.

The spike in U.S. production will allow total nonOPEC supply to grow by an average of 1.7 million barrels per day in 2014, peaking at 1.9 million in the second quarter, the highest annual growth since the 1970s, the IEA said.

That robust growth will compensate for disruptions to Organization of the Petroleum Exporting Countries' production and provides a cushion for oil prices, which otherwise could have spiked much higher than the current $110 a barrel.

OPEC crude supplies slipped to below 30 million bpd for the first time in almost two years, led by steep drops in Libyan and Iraqi exports due to unrest and terminal repairs, and despite Saudi Arabian output topping 10 million bpd for a third month running.

The IEA said that growth in non-OPEC production was so strong that it further reduced its estimates for demand for OPEC crude next year by an average of 100,000 bpd to 29 million bpd - effectively 1 million bpd below current pumping levels.

The IEA left its global oil demand growth forecast for 2014 broadly unchanged at 1.1 million bpd, an increase of 1.2 percent, saying the macroeconomic backdrop was improving.

"European demand data have surprised on the upside recently amid reports that the euro zone's recession ended in the second quarter of 2013 and signs of improvement in business confidence," it said.

But it added that it saw significant downside risks due to the budget standoff in the United States and currency depreciation in many emerging market economies.

The IEA also said few observers expected sanctions on Iran's oil and finance sector to be eased anytime soon, despite a friendlier rhetoric from Tehran.

"Rather, most expect that turning the clock back on sanctions will be a drawnout process based on tangible diplomatic progress with regard to the issues at hand, which many still view as a remote prospect," it added.

The IEA estimated Iran's crude oil production had declined by 100,000 in September to 2.58 million bpd. Oil imports from Iran rebounded by 180,000 to 1.17 million thanks to higher purchases from China and India. 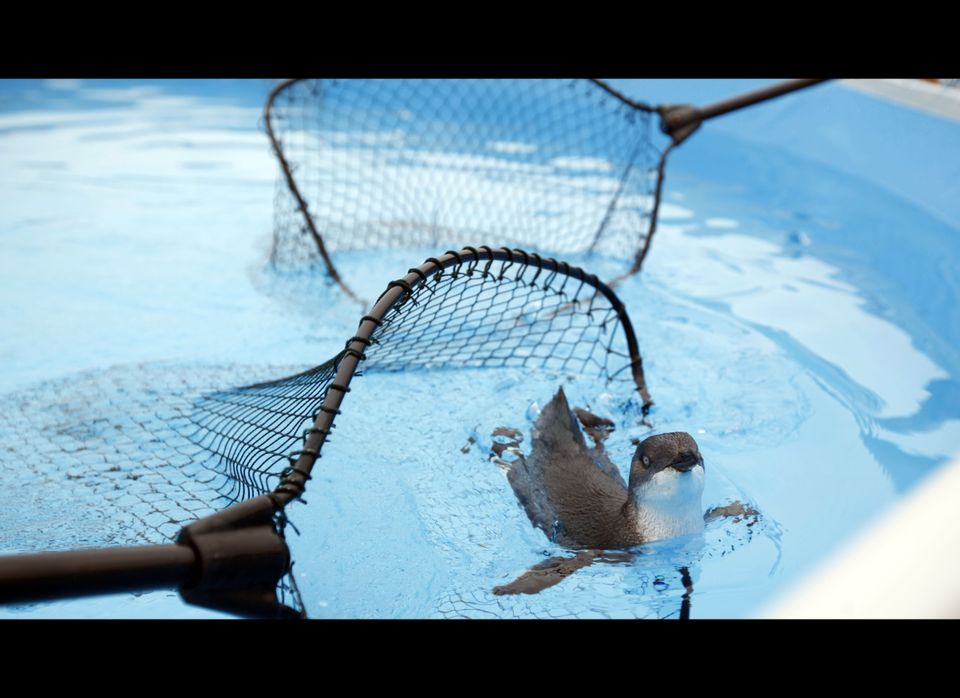 1 / 10
Volunteers take an oiled little blue penguin out of the pool after the recovering session at the wildlife facility in Tauranga, New Zealand, Tuesday, Oct. 11, 2011. The penguins were rescued from the sea after the Liberia-flagged container ship Rena which ran aground last Wednesday started leaking fuel. (AP)
AP