For Ann Lee, NYU professor and former Wall Street derivatives trader, the road to ruin for the U.S. has been staked out: American atrophy and overreach are accelerating the decline of its superpower status. Washington policy gridlock and crony capitalism are only some of the threats that are taking a toll on America's future prospects for growth.

As Lee deftly points out in her provocative and counterintuitive new book, What the U.S. Can Learn from China, the fall of the Spanish empire serves as a warning for America-as-Titanic sailing into the icy waters of the new global economy.

Early on, she states: "... it is found in the fate of the 15th-century Spaniards whose wealth and power were bankrolled by the Italian Medici bankers. Spain began building its empire with the New World and expanded to almost every continent through conquest."

By receiving financing outside its borders, outsourcing its manufacturing, and spreading its military too thin, Spain collapsed and retreated from world dominance. America, Ann Lee points out, is on the same death-spiral as Spain if it doesn't overhaul its policies and place in the world.

Confucian Compass as a Step Forward

What is engaging about What the U.S. Can Learn from China (Berret Koehler, 234 pgs) is that it casts a wide net. It moves beyond the subtitle--"An Open-Minded Guide to Treating our Greatest Competitor as our Greatest Teacher"--from merely comparing two governments' policies and philosophies, and shares what we can learn from Chinese culture in the way of ancient teachings, still in practice today, of Confucianism.

The Confucian Compass revolves around the key cardinal points of the golden rule of respect, to treat one as you treat yourself, education as the foundation of society, and family as the bearings for core moral values. Without these, she insists, the U.S. will not only sink from its ballooning $15 trillion deficit, but lose its competitive edge in the world of business, trade, and innovation. 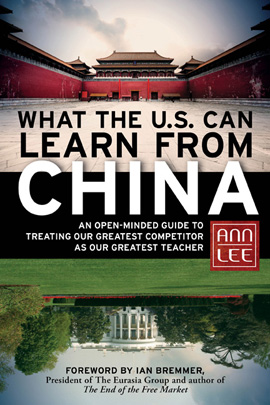 Her background in finance might seem opposite to the inequalities raised by the Occupy Wall Street protests of 99% vs. 1% mantra. But it was the incessant greed she saw in the sector that led to her exit into academia and became her impetus to write this book.

And write Lee does. She gives equal time dressing down big banks, the financial sector and its broken trust with the public; both political parties; and the me-first, entitlement attitude that pervades nearly 100% of all Americans. She challenges America and its inhabitants to be better citizens, here and abroad.

Education dominates the first quarter of the book. The fixes are not easy. Yet that is why Lee recommends the overhaul to start both at the top of the federal, state, and local governments, as well as from the bottom with stronger family nucleuses, respect for elders while learning from their wisdom, and to remake education as the focal point for U.S. rebirth.

U.S. Government in need of Meritocracy

At the "Author Talk" held at the Museum of Chinese in America in New York in January, Ann Lee opened with her background in trading of structured products.

"I left Wall Street in 2006, because it was disconcerting for me to see deals that were irregular. Wall Street was making billions overseas on deals secured by nothing more than baseball cards," she said. "That was not what I signed up for."

Feeling it was corrupt, Ms. Lee left for academia targeting government policy reform. Besides being a senior fellow at Demos, the public policy think tank, and a visiting graduate economics professor at Peking University in 2008, Lee predicated the bursting of the fixed income bubble several years before the crash in a white paper "Wall Street House of Cards."

No one in authority at the time listened to her; they dismissed her warning out of hand. Bottom line: Wall Street and the government were making too much money.

In the most important chapter "Meritocracy," Lee shows that the current U.S. system of political appointees, who run numerous government agencies, are a recipe for failure, if not disaster, such as FEMA's response to Hurricane Katrina. By having political access and connections, incompetent, unqualified managers can be put in seats of power without so much as having a whiff of industry-specific experience. "That must change," she said.

Lee goes further by laying out detailed solutions for the cronyism and political favors that infest Washington. "Like China, the U.S. should incorporate competency tests for those who lead agencies. We need proof of success, a performance metrics and, above all, accountability," she said, and added, "CEO's earn the top position after many years of climbing the corporate ladder. So should government officials."

After shattering the myth about Mao Zedong's communism--today as being the darkest period in Chinese history--Professor Lee points out what the U.S. should learn from China and deploy it to rebuild the country.

"The U.S. needs to adopt what lawyers called '50 labs of democracy' and rename it '50 laboratories of economic opportunity,'" she said with vigor.

Ann Lee told the audience that China is tinkering with different forms of government, including a "democratic experiment." She pointed out how America's 50 states offer a natural lab to test run different experiments, from regulation and banking, to the environment and entrepreneurship.

"We need statistical experimental design. In China, they test an idea, fine tune it, and test it out again. This is not done in the U.S.," Lee said. "In China's special economic zones, decisions are made with objective observations. Test out capitalist methods in economic zones. North Dakota is the only state-owned banking system in the U.S. It's been that way for more than 100 years. They've always been profitable. They thrive during lean times. It is a community-driven idea."

In other words, if her book was solely about what is wrong with America, it could have been named, The Game is Rigged. But because of her unique mix of Chinese-American heritage, passion for her roots, and insights to remake the U.S. into a sustainably strong nation again, Ann Lee's book succeeds on so many levels.

If there is only one minor complaint about the book, I would've liked to read more on the demise of the Spanish empire.

Lee closed by offering hope: "U.S. suffers from a crisis of leadership. But 2012 is an election year. It represents a historic opportunity to change the status quo."

In a follow up interview, Ann Lee qualified that China has a long road to go as a better global citizen. It has to clean up corruption at the local government, enact better quality control for its products, and eliminate accounting scandals in some of its businesses.

In a final chapter What the U.S. Can Learn from China, Lee backs up her talk and points out China's flaws of free speech, journalism, and human rights violations.

Ann Lee's book is a must read.