Life expectancy in the United States ranks 26th out of the 36 member countries of the Organization for Economic Cooperation and Development (OECD), according to a new report from the organization.

The U.S. life expectancy comes in just behind Slovenia, at 80.1 years, and Denmark, at 79.9 years. Comparatively, life expectancy is 81.1 years in the United Kingdom and 82.8 years in Switzerland (the country that came in first in the ranking). The Russian Federation came in last, with a life expectancy of 69.8 years. 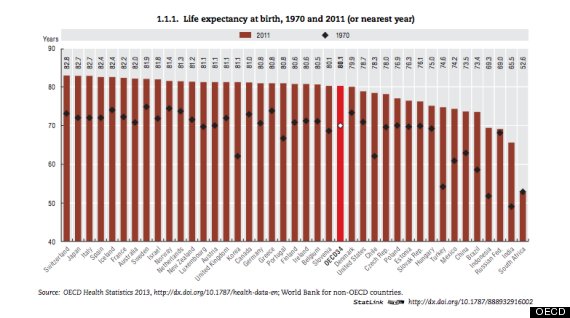 "In the United States, life expectancy at birth increased by almost nine years between 1960 and 2011, but this is less than the increase of over 15 years in Japan and over 11 years on average in OECD countries," according to the OECD.

You can check out the full OECD report here.