While Republicans are quick to pounce on any proposals to raise taxes as a means of stimulating the economy, a new study finds that the U.S. collects a smaller share in taxes than most developed countries.

A look at 2010 data reveals that the U.S. is one of the least taxed countries in the Organization for Economic Cooperation and Development (OECD), according to a study released Monday by Citizens For Tax Justice. The CTJ added up federal, state and local tax revenue.

The only countries in the OECD that collected a smaller percentage in taxes are Chile and Mexico, according to the data. The OECD is a group of 34 countries that work together to improve the global economy.

These findings challenge the Republican talking point that Americans face too high a tax burden. In March, House Republicans passed Rep. Paul Ryan's (R-Wis.) budget plan which seeks to balance the budget within 10 years without raising taxes. Ryan's plan would eliminate 2 million jobs in 2014 and shrink the economy by 1.7 percent, the Economic Policy Institute study projected.

In contrast, Obama's soon-to-be-released budget proposal includes $580 billion in new taxes, which Republicans are against, the AP reports. 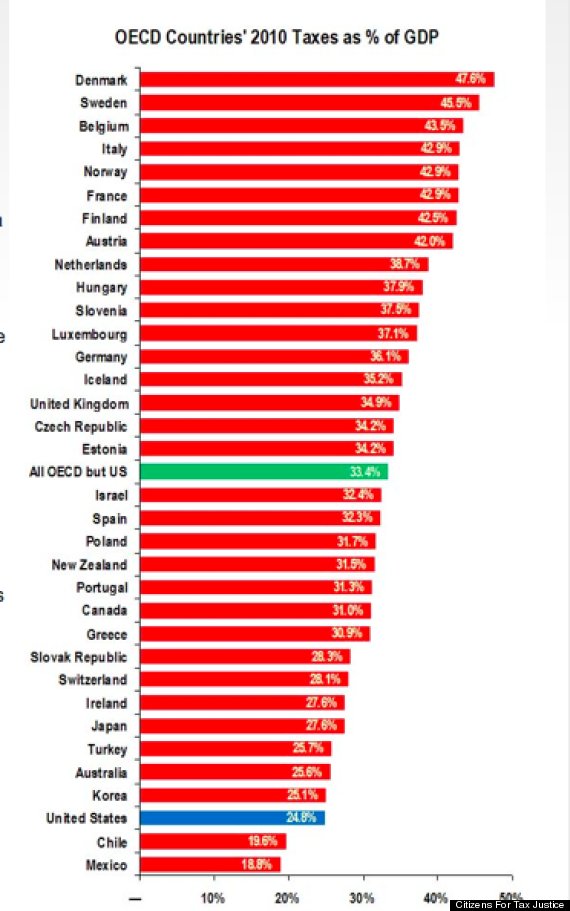