In a hotel parking lot just outside of downtown Mexico City, the roads have been blocked off. The police are here, lights flashing and sirens blaring. The local middle-aged bus driver in a blue uniform, black Reeboks and slightly graying hair, looks terrified. His hands are shaking as he clutches the wheel. The motorcade is in full effect: a bus full of young, nervous U.S. soccer players, two grey bulletproof vans transporting league and federation executives, and a shuttle carrying journalists from every major soccer publication in the United States. From the eighth row of the media shuttle, looking out through the reinforced windows, Mexico City strikes a unique aesthetic. It is both green and urban -- even plush -- yet impoverished. It's late afternoon and with the sun hidden behind the trees, we head off en route to the Azteca Stadium -- Estadio Azteca -- the home of the Mexican national soccer team.

The history of U.S. Soccer at the Azteca is one of abject failure -- 0 wins, 23 losses and 1 tie. Tonight, a young group of Yankees will look to end a drought that dates back to 1937. Some very good U.S. teams have come to Mexico City with optimism and confidence, only to fly home with their heads down, searching for answers.

In the world of soccer, games with no "competitive value" (games that do not deal directly with either tournament qualification or tournament play themselves) are called "friendlies." When the U.S. plays Mexico, friendly is a misnomer of epic proportions. There is nothing friendly about this rivalry. It's vitriolic, it's nasty, they hate each other. The Mexican fan's disdain for the U.S. team is likely the most passionate of its kind, anywhere in the world. However, it may be impossible to know this, without first visiting Mexico City.

Ciudad de México, as it's known in Spanish, is beautiful. It is extraordinarily green and the way the city lives in relative harmony with nature is impressive. The overhanging trees that cover most of the roads provide a nice respite from the August heat. Originally built from the historical capital of the Aztec empire, Tenochtitlan, it bore witness to an indigenous empire, and later its famed, albeit bloody, bout with Spanish imperialism. Today, it is a sprawling federal district (locals also call the larger city D.F., for Distrito Federal) of almost 19 million people with a GDP of over 390 billion dollars. It is separated into 16 boroughs, all of which bathe in a healthy dosage of smog. It is well known that behind her veil of historical riches, greenery, and bright lights, Mexico City can be a very dangerous and discouraging place. The poor air quality is such that the natural lighting of the city is often tainted by an orangish-yellow tint, so much so that the city has built-in contingency plans for when air pollution reaches critical levels. There is also a massive disparity of wealth. The chasm between the haves and the have-nots is evident, especially visible in the makeshift homes tucked away on rooftops, with laundry ropes spread across narrow spaces, only partitioned from their neighbors by chicken wire. There are thousands living on the streets. It used to be called "the city of hope." Do people still call it that?

As the motorcade makes a slight right turn onto one unnamed street from another, and with our driver now sweating profusely, the media shuttle starts to get hit with unknown objects thrown by overzealous Mexican fans on sidewalks. We must be getting closer. After another turn past concrete walls lined with police and graffiti, grown men with painted faces riding in the back of old pick up trucks and stray dogs loitering around street-side taco stands, the Azteca Stadium reveals itself for the first time. Tucked away in the middle class Santa Ursula neighborhood, the entrance to the stadium is a long concrete walkway with black metal fencing and a large malfunctioning light-up sign proclaiming, "Estadio Azteca, Bienvenidos."

As the motorcade comes to a rest in a fenced-off parking lot on the side of the stadium, our driver looks relieved.

The stadium itself is massive. Its trademark concrete support beams that rise from the base to the roof only enhance the imposing gray structure's mountainous feel. Hanging in between the support beams are advertisements for companies like Movistar, Coca-Cola, Adidas and Corona. The largest banners, however, are reserved for Javier Hernandez Balcazar. "Chicharito," or "little pea," as he's affectionately known, is the star of the Mexican national team, and a bona fide hero to the millions of faithful soccer fans around the country. A 5'9" forward from Guadalajara, Hernandez plays his club soccer with English Premier League giant, Manchester United. Per usual, expectations tonight are high for little pea. Especially considering that the U.S. has brought an understrength side to Mexico City, one highlighted by an inexperienced corps of defenders. It is almost universally expected that Chicharito, the crowned jewel of a golden generation in Mexican soccer, will cut apart the Americans, providing the goal scoring in what should prove to be an easy win for a talented soccer country that won an Olympic gold medal less than a week ago. 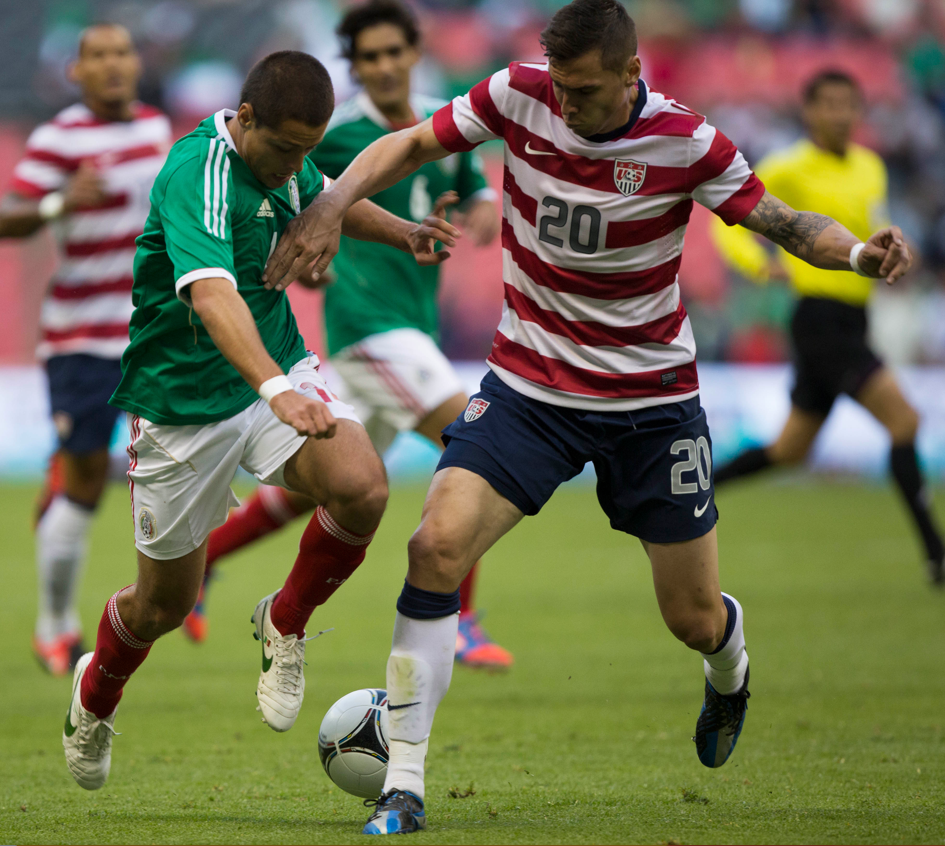 Inside the Azteca, the confines are far from friendly. The stadium seating is built at a Himalayan grade, and the stadium itself sits at an altitude more than two-and-a-half times as tall as Burj Khalifa, the world's tallest building (at 7,400 feet above sea level, it is normal for visiting teams to bring oxygen tanks to the locker room). The view from media row looks directly down over the playing surface and its sheer vertical drop would test the virility of even the most hardened of men. The partial roof traps all the sound in the stadium from leaving, creating an intense acoustic experience. The fans on the lower level are separated from the field by barbed wire, and a moat. These barriers were put in to place to prevent rabid fans from running on to the field. The few American fans brave enough to make the trip are tucked away in to a small section in the upper deck surrounded on all sides by police in riot gear. Despite these security measures, Americans have in the past been beaten up, had bags of urine thrown at them, along with rocks, batteries and any other food or drink that local fans can get their hands on. During a 2004 Olympic qualifier, the Mexican fans even went so far as to chant "Osama, Osama" as dejected American players boarded their bus after a 4-0 loss.

As the game is set to begin, a chorus of boos ring out across the stadium, drowning out the "Star Spangled Banner" as both teams stand at midfield for the national anthems. The American team looks poised, and I'm reminded of a conversation I had with goalie Tim Howard the day prior. When I asked him about how his team would deal with the hostile environment at the Azteca, he said simply: "If you feel fear, you certainly don't express it, you keep it inside."

Beer and soda rain down over the chain link fence and barbed wire that separates the upper deck seating from the media. As the upbeat Mexican anthem begins, the crowd works itself in to a sort of nationalistic fervor. The men take their shirts off and wave them above their heads, jumping up and down as they belt out the lyrics to their national song. Women wave oversized Mexican flags, and the little ones, usually wearing Chicharito jerseys and seemingly unfazed by the event, clap, smile and sing.

As the game progresses, there is no doubt as to which team is which. The U.S. is looking patriotic in red and white striped shirts, blue shorts and white socks. Mexico also looks the part, playing in their traditional green jerseys, white shorts and red socks. There is also little doubt as to who is the better team. The Mexicans control the ball early and often, constantly putting the American defense in dangerous positions. The inexperienced back four for the U.S. bends, but doesn't break. In one telling sequence, a darting Chicharito springs free into open space on a 25th minute counter attack, only to be stopped in his tracks by American center back Geoff Cameron. The game ebbs and flows, with the Mexicans in control but failing to convert any real chances. The first half ends 0-0.

During halftime, members of Mexico's gold medal-winning Olympic team are brought out to raucous applause and a firework show worthy of our Fourth of July -- or maybe I should say Mexico's independence day, known as Grito de Dolores, celebrated each September. With a fever-pitched crowd and chants of "Mexico" ringing through the stadium, the scenes are reminiscent of how I imagine the Coliseum might have felt during the Pax Romana. I would have been only mildly surprised if while warming up for the second half, part of the pitch had dropped from the field and a Bengal tiger had attacked Landon Donovan á la Russell Crowe in Gladiator.

In the second half, Mexico again looks the stronger side and easily controls possession early. While a few substitutions from each team seem to disrupt the flow of the game, it is against the run of play that the Americans provide the game's defining moment.

Kyle Beckerman, the dreadlocked holding midfielder for the U.S., finds himself with the ball at his feet 25 yards from goal, a touch pass to Brek Shea (who had come on the field only a minute earlier) frees the left-footed winger, who then makes a menacing run at Mexican defender Javier Rodriguez and plays a deflected ball across the face of goal. After a brilliant back heel pass by Terrance Boyd, and with Mexican goalie Guillermo Ochoa blocked from the play by his own teammate, the diminutive American defender Michael Orozco-Fiscal (who plays professionally in Mexico) is able to tap home what would prove to be one of the most unlikely, and famous, goals in United States soccer history.

While the Americans celebrate, the Mexican faithful are furious. With debris raining down, and a venomous contingent of home fans drawing in on the 20 or so American fans in the upper deck, the riot police are forced to evacuate the American faithful from their seats. In the media area, beer and soda are thrown our way, without much accuracy. A well-known journalist sitting next to me, sensing my disbelief, informs me that this is "very tame" by Azteca standards.

For the next 11 minutes the U.S. puts on a courageous display -- but only a world-class performance from Howard, who brilliantly stops Chicharito twice in the closing moments, is enough to preserve a spectacular victory for the underdog Americans. On one occasion, Chicharito heads the ball at Howard from point blank range, forcing the American talisman to save once with his hand, and again with his foot just before the ball spins in to the net.

After the game, the U.S. players speak of courage, pride, satisfaction and relief.

The victory is historic, the streak is broken, and the Mexican fans are forced to leave the stadium deflated, some angry.

The lighted Azteca Stadium sign flickers in the distance and some of the letters are no longer visible in the night sky. As we are funneled down to street level, along with thousands of dejected Mexican fans, into a narrow stadium exit, an older man, perhaps 60 wearing a green Mexican jersey is walking next to me.

He reaches out, and we shake hands.

Maybe this was a friendly after all.