Across the US, critical military installations are being put at risk by environmental change. According to the US Department of Defense's (DoD) 2010 Quadrennial Defense Review Report:

In 2008, the National Intelligence Council [NIC] judged that more than 30 US military installations were already facing elevated levels of risk from rising sea levels. DoD's operational readiness hinges on continued access to land, air, and sea training and test space. Consequently, the Department must complete a comprehensive assessment of all installations to assess the potential impacts of climate change on its missions and adapt as required.

Sounds logical, and forward thinking, and the US military certainly has the expertise to do a proper job of it. However, there are multiple systemic barriers standing in the way 'climate proofing' those critical installations.

Also, we tend to look at environmental factors in silos. The NIC's 2008 focus was primarily sea level rise. However, considering flooding threats alone, coastal sites may be affected by sea level rise, but also subsidence, river flooding, unusually heavy rainfall, and dam bursts. As seen with the recent Mississippi floods, affected areas may be hundreds of miles for the initial impact site, making the catchment area of a true risk assessment much larger than normally used.

This highly focused approach is endemic, and often a result of the limited scope of the orders given. For example, after 9/11, expert teams were sent around US nuclear installations to assess their vulnerability to terrorist threats. That would have been an ideal opportunity to also assess their vulnerability to environmental threats. An opportunity missed, not because the experts weren't qualified to do the assessment, but because it wasn't the remit of the operation.

However, assuming all variables have been taken in to account, and a true assessment of risk is made, adaptation may still be blocked for purely political reasons.

This is not hypothetical. In 1992 Florida's Homestead Air Force Base was virtually destroyed by Hurricane Andrew. In 2005, Mississippi's Keesler Air Force Base was hit by Katrina, smashing around 95 percent of the base, and triggering an evacuation of equipment and people that one would have hoped would have been available to help a region in peril. 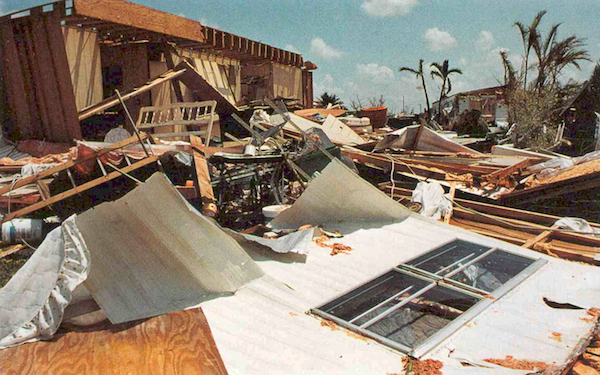 What has since happened to those bases is instructive. Over 100 million dollars (in 1993 dollars) was poured into the reconstruction of Homestead, in the politically important state of Florida. And that was in spite of a 1995 recommendation by the Base Realignment and Closure Committee to close the base. However, state and federal level politicians fought for the base, and it stayed open. Keesler suffered 950 million dollars in damages, and was quickly rebuilt, in the same location.

Homestead and Keesler demonstrate why it will be extremely difficult for the US military to engage in real adaptation. Bases are key regional economic anchors, bringing in jobs, infrastructure and investment. No elected official will let one move out of their district without an enormous fight. Even nearly destroyed bases in known vulnerable locations are being rebuilt. It would be difficult to muster the political will necessary to move bases preemptively. The result is narrow regional (the revenue from the bases won't be lost, just moved) political and economic interests are potentially undermining national security.

Another issue is potential government liability. If somehow the military managed to move a base due to concerns over flooding causing by environmental change factors, would that give neighbouring communities the right to ask for similar relocation funds?

Similarly, say a base moves, yet the federal government still provides flood insurance to the region through the National Flood Insurance Program. Then a flood hits and there is loss of life. Would the government be liable for the deaths because one branch, the military, has said this location is too dangerous to stay in, while another branch is subsidizing people through federally backed insurance to stay there? Dismantling, or even limiting, the National Flood Insurance Program (NFIP) would be even more politically difficult than moving a base because it is a key generator of political funding through property taxes and developers.

Ultimately, when it comes to moving US bases out of harm's way, the very real risk to national security caused by the potential loss of critical installations is likely to be repeatedly outweighed by the seemingly more immediate political and economic risk of losing a key regional economic driver.

All throughout the systems, real risk is being distorted, discounted and disguised. If even the well funded, and trained, US military can't get it right at home, imagine the level of the challenge globally. Potential market-based safety mechanisms, like insurance, are being subverted by politically motivated initiatives like the bankrupt NFIP, and caps on liability, which essentially offset the risk from the individual region or sector on to the population as a whole.

The problem is, those costs are adding up, and the public purse is increasingly light. As the environment changes, it will seem like we are building, and rebuilding, and rerebuilding, sandcastles below the high tide mark.

This was adapted from Cleo Paskal's 'Rebuilding Sandcastles' feature for Chatham House's The World Today.