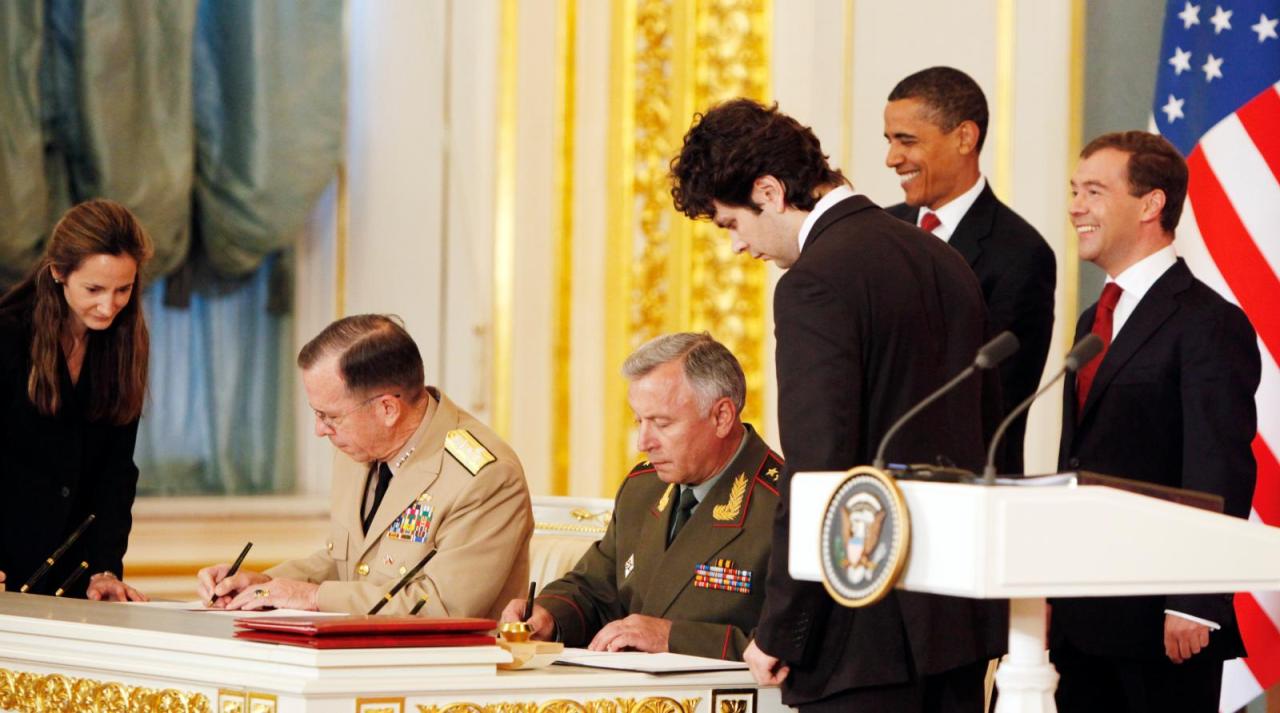 President Barack Obama and Russian President Dmitry Medvedev look on as then-Joint Chiefs Chairman Adm. Michael Mullen, left, and his Russian counterpart sign the New START arms control agreement in Moscow in July 2009. Two-and-a-half years after the Obama administration launched its much-touted effort to "restart" relations with the Kremlin, the former Cold War rivals are at odds over a range of issues, including U.S. plans to place a missile defense system in Europe. (AP Photo/Haraz N. Ghanbari, File)

A bilateral U.S.-Russian arms control working group met last Wednesday in Washington, D.C., reportedly to talk about reducing short-range, battlefield nuclear weapons as well as stored warheads. The meeting was one of a series of what the Obama administration is calling "strategic stability talks" to try to build on momentum from the New START nuclear arms control treaty, which reduced both countries' long-range "strategic" nuclear arsenals to fewer than 2,000 warheads apiece.

I'm not privy to exactly what went on between U.S. Undersecretary of State Ellen Tauscher and Russian Deputy Foreign Minister Sergei Ryabkov, but according to one account, it was nothing momentous. Why? Russia--which still has an estimated 2,100 deployed battlefield, or "tactical," nuclear weapons while the United States has pared down to about 200--is unlikely to budge on this--or much else--unless the United States addresses Russia's concerns about a U.S. ballistic missile defense system in Europe.

This dispute over missile defense reached a crescendo of sorts on November 23 when Russian President Dmitry Medvedev announced U.S.-Russian negotiations over missile defense were over. The United States is unwilling to provide a written guarantee that the system would not be used against Russian nuclear forces, Medvedev said, and he warned that, if the United States carries out its plans to build it without such an assurance, Russia would site missiles in its westernmost Kaliningrad region and consider walking away from the New START agreement. And just two days after the U.S.-Russian working group met, the head of Russia's strategic missile forces announced plans to build a new heavy intercontinental ballistic missile with an "enhanced capability to breach a hypothetical U.S. missile defense system."

Russia's reaction isn't a surprise. It has long argued that systems the United States is developing could threaten its missiles. The Obama administration, meanwhile, maintains that the system is meant to counter a potential threat from Iran and dismisses Russia's objections.

What is puzzling is that both sides continue to squabble over what amounts to a military fantasy.

First, I should explain that there are two main U.S. missile defense systems. One is the ground-based system currently deployed in Alaska and California. The other is the sea-based Aegis system, which is deployed on Navy ships. The Bush administration proposed to put a ground-based system in Eastern Europe, but the Obama administration scrapped that idea in September 2009 and instead decided go with the Aegis system, placing interceptors on ships and on land.

Neither system has ever been tested under real-world conditions. While both have scored some intercepts, the tests have been highly scripted and conducted under controlled conditions.

The two systems also have an Achilles heel. A 2000 Union of Concerned Scientists-MIT report, "Countermeasures," concluded that decoys and other countermeasures could defeat the U.S. ground-based missile defense system by fooling its sensors and interceptors. Any country that has the capability of building a long-range missile, the report concluded, also would have the capability of outfitting it with effective countermeasures. U.S. intelligence analysts made the same observation in 1999, and it remains true today.

So why should Russia -- or China, for that matter -- be concerned?

In 2009, when the Obama administration made its decision to deploy the Aegis system in Europe, it also announced a plan to develop a series of increasingly more sophisticated Aegis interceptors over the next decade. And missile defense plans now call for the United States to build hundreds of sea-based interceptors and position them on ships around the world.

So Russian analysts, making assumptions about how capable these systems eventually might be, see a potential threat. At the same time, President Medvedev and other political leaders want to reassure Russians citizens they are protecting them from what they see as an expanding U.S. military presence. (For an analysis of how Russian analysts could conclude the U.S. missile defense system poses a threat, see a September report published by the Federation of American Scientists.)

Months before committing to site an Aegis system in Europe, the Obama administration pledged it would "not divert resources from other national security priorities until we are positive the technology will protect the American public." Nearly three years later, the administration is still promoting this ineffective system--and poisoning relations with Russia.

That's a big mistake, regardless of the fact that President Medvedev's recent move to scotch missile defense talks might be calculated to play well at home. The United States needs Russia's cooperation on a number of critical issues, including following through on the New START agreement, making further cuts in its own nuclear arsenal, and preventing Iran from developing long-range missiles and nuclear weapons.

In his widely praised April 2009 Prague speech, President Obama presented a farsighted goal to strengthen U.S. and global security by reducing nuclear arsenals around the world. But since then, his administration has undermined its efforts to meet that laudable objective--as well as "reset" relations with Russia--by stubbornly pursuing a missile defense system that has never been proven to work.

Elliott Negin is the director of news and commentary at the Union of Concerned Scientists in Washington, D.C. In the 1980s, he edited Nuclear Times magazine, which the Utne Reader named one of the "10 magazines that made a difference" in that decade, praising it for presenting "bold new perspectives on global survival."