Update: Venezuelan government agrees to expand audit of votes to 100 percent of all votes cast

The United States is refusing to recognize the results of the Venezuelan elections, insisting that Venezuela conduct a re-count of 100 percent of the votes in light of the narrow margin of victory for Nicolas Maduro. The facts surrounding the voting process and election outcome in Venezuela, the U.S.'s own experiences with close presidential elections, and the U.S.'s recent recognition of coup governments in Latin America demonstrate that the U.S.'s position in regard to Venezuela has nothing to do with the U.S.'s alleged concerns for democracy, but rather, its complete disdain for it.

I just returned from Venezuela where I was one of over 170 international election observers from around the world, including India, Guyana, Suriname, Colombia, Bolivia, Nicaragua, Scotland, England, the United States, Guatemala, Argentina, South Korea, Sri Lanka, Ethiopia, Jamaica, Brazil, Chile, Greece, France, Panama and Mexico. These observers included two former presidents (of Guatemala and the Dominican Republic), judges, lawyers and numerous high ranking officials of national electoral councils. What we found was an election system which was transparent, inherently reliable, well-run and thoroughly audited. 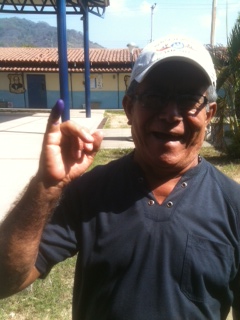 Indeed, as to the auditing, what has been barely mentioned by the mainstream press is the fact that around 54 percent of all votes are, and indeed have already been, audited to ensure that the electronic votes match up with the paper receipts which serve as back-up for these electronic votes. And, this auditing is done in the presence of witnesses from both the governing and opposition parties right in the local polling places themselves. I witnessed just such an audit at the end of election day on Sunday. And, as is the usual case, the paper results matched up perfectly with the electronic ones. As the former Guatemalan President, Alvaro Colom, who served as an observer, opined, the vote in Venezuela is "secure" and easily verifiable.

In short, the observers' experience this past week aligns with former U.S. president Jimmy Carter's observation last year that Venezuela's electoral system is indeed the "the best in the world."

And so, what were the results of the election? With an impressive 79 percent of registered voters going to the polls, Nicolas Maduro won by over 260,000 votes, with a 1.6 percentage point margin over Henrique Capriles (50.7 to 49.1 percent). While this was certainly a close race, 260,000 votes is a comfortable victory, certainly by U.S. election standards. Thus, recall that John F. Kennedy beat Richard Nixon in 1960 with 49.7 percent of the vote to Nixon's 49.6 percent. In addition, George W. Bush became president in 2000, though losing the popular vote to Al Gore, with 47.87 percent of the vote to Gore's 48.38 percent, and with the entire race coming down to several hundred votes in Florida, with the Supreme Court actually blocking a hand recount in Florida. In none of these cases, did any nation in the world insist upon a recount or hesitate in recognizing the man declared to be the winner. Indeed, had a country like Venezuela done so, we would have found such a position absurd. The U.S.'s current position vis à vis Venezuela is no less absurd.

The U.S.'s position is all the more ridiculous given its quick recognition of the coup government in Paraguay after the former bishop-turned president, Fernando Lugo, was ousted in 2012, and its recognition of the 2009 elections in Honduras despite the fact that the U.S.'s stated precondition for recognizing this election -- the return of President Manuel Zelaya to power after his forcible ouster by the military -- never occurred. Of course, this even pales in comparison to the U.S.'s active involvement in coups against democratically-elected leaders in Latin America (e.g., against President Árbenz in Guatemala in 1954, against President Allende in Chile in 1973, and against President Aristide in Haiti in 2004).

And, the U.S.'s failure to recognize the Venezuelan elections is having devastating consequences in Venezuela, for it is emboldening the Venezuelan opposition to carry out violence in order to destabilize that country. Unlike Al Gore in 2000 who stepped aside for George W. Bush in the interest of his country and the U.S. Constitution, the Venezuelan opposition, being led by Henrique Capriles, clearly wants to foster chaos and crisis in Venezuela in order to topple the Maduro government by force (just as the same forces represented by Capriles forcibly kidnapped and briefly overthrew President Chavez, with U.S. support, in 2002). Thus, reasonably believing itself to have the backing of the U.S. and its military, the opposition is causing mayhem in Venezuela, including burning down clinics, destroying property, attacking Cuban doctors and destroying ruling party buildings. In all, seven Venezuelans are dead and dozens injured in this opposition-led violence.

There is no doubt that the U.S. could halt this violence right now by recognizing the results of the Venezuelan elections, just as the nations of the world recognized, without question, the results of the elections which put John F. Kennedy in power in 1960 and George W. Bush in power in 2000. The reason the U.S. is not doing so is obvious: It does not like the Venezuelans' chosen form of government, and welcomes that government's demise, even through violence. The U.S., therefore, is not supporting democracy and stability in Venezuela; it is intentionally undermining it.