U.S. News and World Report publishes its annual rankings of the best colleges and universities in America this month, and if past is prologue, the rankings will receive plenty of attention and criticism. College affordability advocates argue that the ranking incentivizes schools to build lavish new buildings that drive up tuition. Others point to the subjective nature of the reputation survey. Even President Obama recently criticized the rankings for "encourag[ing] colleges to game the numbers and rewards them in some cases for costs."

Despite all the criticism, the rankings' shortcomings aren't entirely U.S. News' fault. A school's reputation and money account for almost half (44.5 percent) of the rankings are proxies for information that just isn't available. Not only is it not available, but collecting and keeping it all in one place for students to shop around is actually illegal.

The 2008 reauthorization of the Higher Education Act specifically banned the government from tracking individual student education statistics and matching them to workforce outcomes. That it made it illegal for the federal government to collect crucial variables like the job placement rates, loan repayment rates, and average incomes from a particular major at a given school. 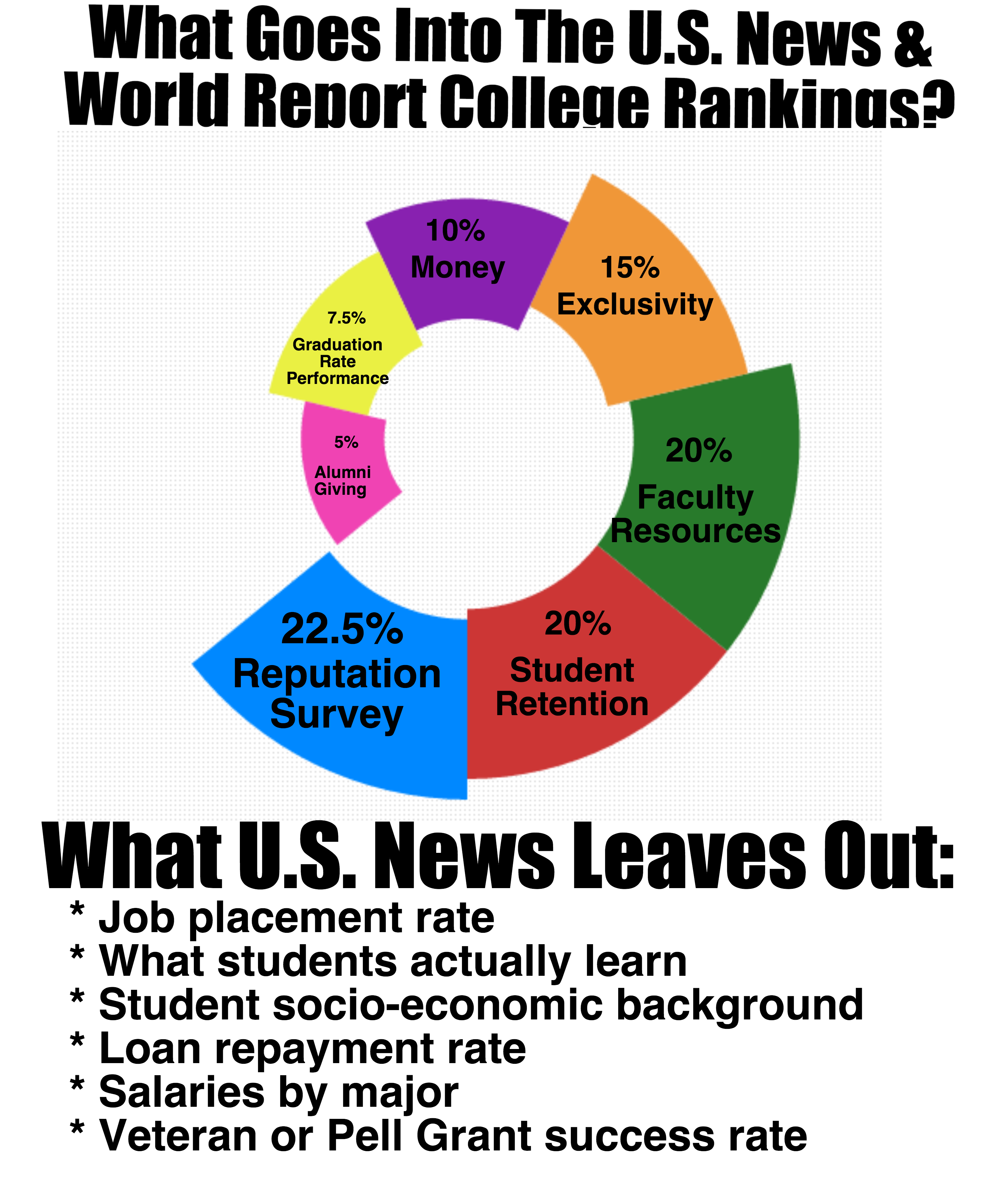 Imagine you're a high school senior (or a parent of one), and you're about to make the second biggest purchase of your life, deciding where to attend college. You're choosing between two schools: an applied engineering major at your state's flagship public university, or an elite private research and technology college halfway across the country. How many students like you graduated on time at either school? Which school produces more graduates that actually work in the field they studied? Which graduates are having an easier time paying off their loans? That's crucial information that would inform your decision.

The crazy thing is that the data is out there. Schools track how different types of students perform and the IRS and Social Security Administration track incomes. Those datasets just aren't talking to each other. Privacy advocates warn of the government abusing or leaking the information, but there has to be a way to protect students' privacy while simultaneously giving them the information they need to make an informed decision on where to attend college.

That's part of what our consortium of policy analysts, student and business advocates, and higher education representatives is trying to do. With support from the Bill and Melinda Gates Foundation, the Reimagining Aid Design and Delivery (RADD) project is working on ways we can improve college choice. Students need comparable information about institutions that offer them a quality education at an affordable price.

And students agree: In a 2012 survey conducted by Young Invincibles, student leaders ranked graduation and job placement rates as the most important factors in picking a school. Factors like academic prestige and the US News and World Report ranking were rated far lower. Researchers at the College Board and Harvard Business School found that students facing a flood of information in the Internet age reach for simplified metrics, like college rankings, to make decisions. So this new data should be presented simply too.

Our group will be designing policy recommendations, briefs, and events through March, getting the word out about the lack of helpful data in higher ed, and crafting what solutions could look like. Stay tuned.