In geopolitics, when détente fails, it's time for deterrence, and nowhere more so than in the South China Sea. China's expansionist designs on the region's strategic shipping lanes and untapped natural resources are turning it into the next global hotspot.

Last month, the U.S. - signaling its determination to assert its presence- sent one of its guided missile destroyers within 12 nautical miles of the Chinese-built artificial islands in the disputed Spratly archipelago. Beijing was so rattled it warned of a potential war. 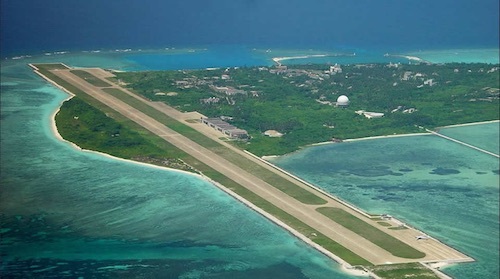 More than half of the world's trade and five trillion dollars worth of goods traverse the region's waters yearly. Beneath it are untold pockets of oil, natural gas and rare earth minerals. Millions of people in the surrounding Southeast Asian nations depend on it for their living.

Today, China claims dominion over nearly all of the South China Sea. The Philippines, Vietnam, Malaysia, Brunei and Taiwan have overlapping claims, but it is China who has played the aggressor in the absence of the American empire. It has repeatedly rammed Vietnamese fishing boats and arrested Vietnamese and Filipino fishermen in open waters over the last decade. It placed an oil rig last year in the Parcel Islands within Vietnamese territorial waters, provoking massive Vietnamese protests. It sabotaged Vietnam's oil exploration ships by cutting their cables. In 2013 it engaged in a two-month standoff with the Philippines in the area called Scarborough Shoal until heavy storms drove fishing vessels from the area and ended the stand off.

China's artificial islands in the Spratly archipelago are growing fast and furiously, with a 3000 meter runway, two helipads and a radar tower, all in the name of military defense.

To secure natural resources, China may practice soft power diplomacy in Africa and Latin America, but in its southern backyard it exerts gunboat diplomacy. While calling for bilateral negotiations to resolve territorial disputes, it intimidates and bullies weaker opponents and effectively disempowers ASEAN (the Association of Southeast Asian Nations) as a collective negotiating entity.

Since 9/11, China has bet on the U.S. being too occupied with its wars with Iraq and Afghanistan and its own economic recession to seriously compete in the Pacific Rim.

Until recently, the bet has paid off. The U.S. practiced détente to address disputed claims in the region. At the ASEAN Regional Forum in Hanoi in July, 2010, then-Sec. of State Hilary Clinton reiterated the U.S.'s "national interest" in calling for a regional solution but her words fell on deaf ears. China continued to build its military bases in the region unimpeded. 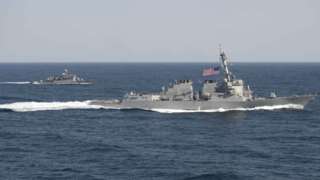 In a sense it forced a shift in America's stratgy from détente to deterrence. Last year, the U.S. signed a landmark deal with Australia to access that country's military bases. For five years, the US and Vietnam have carried out joint military exercises in the South China Sea despite China's loud objections. Elsewhere, it drove a wedge between China and Myanmar by renewing diplomatic ties with the latter and successfully spurred democratic reforms. It has been trying to build inroads to Laos and Cambodia to checkmate China.

In fact, the U.S. has had no choice but to step up. ASEAN on its own has been too weak and divided to present a united front to China. Vietnam, long subservient to China, has been ceding land rights, allowing China to exploit its pristine lands in the central highlands for bauxite, at a disastrous cost to its environment. Lately, Hanoi has sought closer ties with Washington and repeatedly asked Congress to lift its ban on weapon sales. It has even dangled access to the strategic Cam Ranh Bay as an incentive.

The U.S. must restore balance in the region, which means risking confrontation when all else fails.

Presidential candidate Hillary Clinton seems to understand the high stakes. She championed America's pivot to Asia when she was Secretary of State, writing in a much touted Foreign Policy essay "The future of politics will be decided in Asia, not Afghanistan or Iraq, and the United States will be right at the center of the action." Were she to become president, predicts National Interest Magazine, she is expected to "quickly muck in to the region's challenges in an effort to shore up U.S. primacy and reinvigorate the pivot policy she once led."

Indeed, whoever becomes the next president, dominion over the South China Sea may well decide the rise and fall of more than one empire over this century. It will take a deft political hand to avoid destabilization but also bring peace back to the region.

Andrew Lam is the author of the memoir "Perfume Dreams: Reflections on the Vietnamese Diaspora," a book of essays, "East Eats West: Writing in Two Hemispheres," and "Birds of Pardise Lost," a collection of short stories.