Last month's tepid job growth offered another reminder that we’re a long way off from getting back to where we were before the recession.

The U.S. added 175,000 jobs in May, and the unemployment rate ticked up to 7.6 percent, the Labor Department announced Friday. At that pace of job growth, it will take more than 6 years for America to get back down to its pre-recession jobless rate, according to the Economic Policy Institute, a left-leaning think tank.

By other measures, it could take even longer for the U.S. to reach pre-recession levels of employment. If employers add 208,000 jobs per month -- that’s the average pace of job growth during the best years of the 2000s -- then it will take until April 2020 to close the “jobs gap,” according to an analysis from the Hamilton Project, a Brookings Institute research group aimed at advancing growth.

The “jobs gap” is the number of jobs the U.S. has to create to get back to pre-recession employment levels, while still absorbing the new job-seekers who enter the labor force, according to The Hamilton Project.

Making matters worse is lawmakers' recent insistence on slashing budgets. Current austerity measures will leave the U.S. with 2 million fewer jobs by 2019, a recent study from the left-leaning Center for American Progress found.

Check out the chart exploring the jobs gap from the Hamilton Project below, or click over to their site for an interactive version of the graphic. 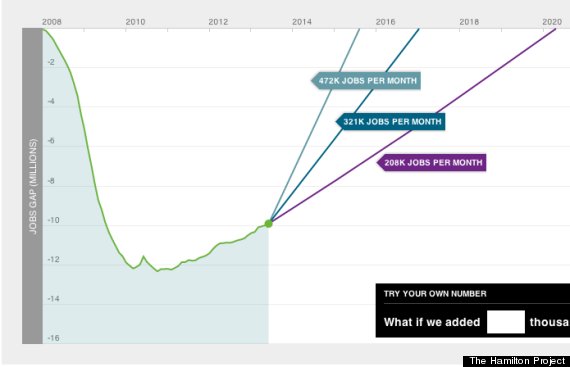