Since publishing the article, U.S. Presidential Candidates' Prescriptions for a Healthier Future: A Side-by-Side Comparison in July of 2007, several of the 2008 presidential candidates have released more details about their health care proposals. With health care a major issue on the minds of American voters (second only in importance to the war in Iraq) and the first presidential caucuses taking place, it's time to compare the candidates' most recent plans and initiatives to improve the health of Americans and people worldwide.

The next president of the United States will confront major health policy decisions that will affect the lives of all Americans. Despite spending over $2 trillion a year on health care - 18% of the U.S. GDP and twice as much as any other nation -- the United States ranks only 45th in life expectancy and 37th in a World Health Organization study on the performance of national health systems. The U.S. Federal government currently spends more on health care than on Social Security and national defense combined, the next most expensive items, but Americans get the right treatment only 55% of the time. Expenditures on health care in the United States -- already the highest per person in the world -- are predicted to nearly double by 2016, to $4.1 trillion, or 20% of GDP. That means, if this trajectory is not altered, in less than a decade 20 cents out of every dollar produced in America will be spent on health care. Currently, more than 75% of health care dollars are spent on patients with chronic diseases, yet an estimated 60% of all chronic diseases are caused by preventable factors, such as smoking, obesity, and physical inactivity. But despite these statistics, less than 5 cents of every health care dollar supports prevention and public health. Furthermore, global health concerns, including AIDS, TB, malaria and the chronic disease pandemic, have humanitarian, economic and national security implications for the United States.

The next president of the United States will also decide whether to increase our national investment in scientific research, which is the foundation for effective public health and medical interventions, the engine of societal progress, and a cornerstone of innovation for the American economy. Over the past several years, significant reductions in funding -more than 13% in 2006 (in inflation-adjusted dollars) at the NIH alone -- as well as limitations on types of studies conducted, such as stem cell research, have had a significant impact on the way researchers work, laboratories operate, and universities hire. These reductions are endangering efforts to advance the frontiers of knowledge, to find cures and prevention strategies for the diseases that affect American families, to cultivate the next generation of scientists, and to foster entrepreneurship in the United States including the establishment of new health-related businesses and product opportunities.

Alarmingly, the effects of significant decreases in funding in recent years for biomedical research are coming at a time of escalating threats to human health. The prevalence of chronic diseases such as heart disease, cancer, and diabetes is increasing at an alarming rate, and over 39 new deadly infectious diseases including AIDS, now a global pandemic, have emerged worldwide since the 1970s. Moreover, living in an interconnected global society in which two million people cross national borders each day, infectious illnesses such as avian flu, SARS, AIDS, West Nile virus and the threat of bioterrorism are just a jet plane away. In fact, the recent controversy surrounding the globe-trotting American patient infected with drug-resistant tuberculosis dramatically highlights not only the vulnerabilities in the public health and national security systems of the United States, but also underscores the urgent need for greater research investments on diseases that may seem to be worlds away.

While many Americans feel uninformed about the views of their elected officials on scientific, medical, and health research, most seem to understand the importance of providing necessary funds for medical studies. A poll conducted by Research!America in February 2007 found that the vast majority of people in the United States believe that science is very important to our health (86%) and competitiveness (78%) as a nation. Sixty-nine percent of Americans believe that scientific research is critical to our economy, 97% of Americans think it is important for the United States to be a global leader in scientific research, and 91% believe that it is essential in eliminating diseases, such as cancer. It is not surprising, then, that 83% of those polled in a 2006 survey indicated that they were more likely to vote for a candidate who supported increased funding "to find cures for and to prevent disease".

With our current sick care system, Americans cannot afford -- socially, politically, economically, or otherwise -- to remain on the sidelines. We have a window of opportunity to establish a real health care system with the upcoming 2008 presidential election. While there is a general consensus among the presidential candidates about the importance of reducing health care costs, delivering high-quality patient care, expanding insurance coverage, strengthening scientific research, and underscoring the power of disease prevention, their strategies and methods vary on how to best accomplish these goals. In the weeks ahead, the presidential candidates should further articulate their proposals for achieving a more cost-effective and efficient health care system, for enhancing scientific and medical research, for incorporating health information technology to provide 21st century care, and for improving global health.

This article provides the most comprehensive side-by-side comparison, in chart form, of the presidential candidates' health care plans currently available based on information provided on their websites (much of it in their own words) as well as from interviews and statements they have made to the press and in the debates thus far. The updated charts below include a review of the presidential candidates' proposals for providing access to health care for Americans, their programs to combat specific illnesses including HIV/AIDS and cancer, as well as a closer look at their plans for fostering scientific and medical research and improving global health. Future updates will shine a spotlight on further details (as they become available) of the candidates' prescriptions to improve the health of our nation and world.

Click on the thumbnail charts for the full PDFs. 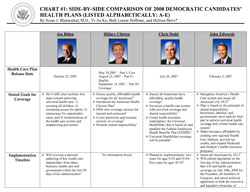 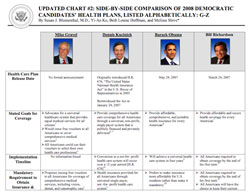 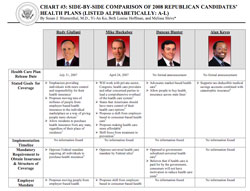 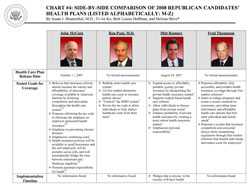 5 "What is Self Improvement?" Duke University Medical Center, July 6, 2007

*Rear Admiral Susan Blumenthal, M.D. (ret.) is the Distinguished Advisor for Health and Medicine at the Center for the Study of the Presidency in Washington, D.C. and a Clinical Professor at Georgetown and Tufts University Schools of Medicine. She served for over 20 years in health leadership positions in the Federal government, including as Assistant Surgeon General of the United States and the first Deputy Assistant Secretary of Women's Health in the U.S. Department of Health and Human Services, and as Chief of the Behavioral Medicine and Basic Prevention Research Branch at the National Institutes of Health.

In future use of this material, please cite: