In the year 1900, you had beaten the odds if you saw your 49th birthday, as the average life expectancy for Americans was 48 years. The leading killers then were infectious diseases like tuberculosis, diphtheria, and influenza. Smallpox had a large and lethal presence as well. For women, death also came from complications of childbirth. Today, Americans will live on average 30 years longer than they did a century ago. This is due to the triumph of public health interventions such as sanitation, improvements in hygiene and nutrition, clean water supplies, measures to reduce infant and maternal mortality, safety regulations, and advances from scientific research including vaccinations, antibiotics, and new technology to effectively diagnose, treat and prevent diseases.

Over the past decades, investment in research supported by our nation's Federal agencies including the National Institutes of Health (NIH), the Centers for Disease Control and Prevention (CDC), the Agency for Healthcare Research and Quality (AHRQ), and the National Science Foundation (NSF) has successfully transformed our country into the global leader in biomedical research. Medical advances as a result of these agencies' funding combined with private sector entrepreneurship have improved the health and quality of life for Americans and people around the world. Over the last three decades, the government invested on average $44 per year for research at NIH for every American -- the equivalent of the monthly cost of most basic cable television plans.1 The result has yielded lifesaving dividends. For example, in the United States, cancer deaths are falling for the first time in thirty years, deaths from heart disease and stroke declined by two-thirds, HIV/AIDS has been transformed from a terminal to a chronic disease in the industrialized world, new imaging technologies have revolutionized the diagnosis and treatment of diseases, and the human genome has been deciphered creating a roadmap for new therapeutic advances. In recognition of these past successes, and the potential for future medical breakthroughs, the NIH budget grew from $8.9 billion in 1992 to $27 billion in 2003 with Congress doubling funding for this agency between 1998 and 2003.2 NIH is the largest financial source of grants to support biomedical research, training, and construction and support of laboratories. Over 3,000 research institutions, including universities and tens of thousands of researchers and personnel, depend on external funding from NIH to support their scientific work.3

Medical and public health research is the engine of societal progress and a cornerstone of innovation for the American economy, but significant reductions in funding -- over 13% (in inflation-adjusted dollars) last year at the NIH alone -- as well as limitations on types of studies conducted, such as stem cell research, are endangering efforts to advance the frontiers of knowledge, to cultivate the next generation of scientists, and to foster American entrepreneurship including the establishment of new health-related businesses and product opportunities. The doubling of NIH's budget that occurred between 1998 and 2003 was the result of years of sustained funding increases of 14% to 15% annually.4 Comparatively, from 2004 to 2006, the NIH budget grew by only 2% each year. A 3.7% funding increase would have been necessary to merely keep up with the rate of inflation. And recently, the situation has worsened: in fiscal year 2007, the Administration's proposed $2.77 trillion federal budget did not include an increase for NIH.5 This flat funding, combined with only a nominal rise over the previous several years, coupled with the escalating costs of conducting medical research, amounted to the first spending cut for the NIH in 30 years. The proposed fiscal year 2008 budget would decrease funding further by another $329 million (1.1%) from last year's allocation of $28.6 billion, leaving NIH's inflation-adjusted funding at 13% below 2004 levels.6 These reductions have a significant impact on the way researchers work, laboratories operate, and universities hire.

In order for scientific advances to occur, researchers must be able to take risks. Due to the budget cuts, some investigators are abandoning innovative, high risk studies which may be less likely to be supported, leaving many good ideas on the cutting room floor. In 2002, when the federal budget for scientific research was growing rapidly, the government approved one in five promising proposals for new research; today, only one in ten is funded.7 Additionally, scientists are being forced to downsize laboratories and younger researchers must wait longer to obtain their first grants. In 1970, the average age of a first grant recipient was 34.2 years; today it is 41.7 -- a statistic that is discouraging young people from entering scientific research in the first place.8 America's 60,000 postdoctoral scholars, those in advanced training with senior scientists, who often perform the day-to-day work in labs, are especially endangered: fewer NIH awards could result in the hiring of fewer postdocs and reductions in the salaries of those who remain. The bottom line: our share of the world's scientists and engineers has declined, with some U.S. researchers choosing to work in other countries and fewer college students entering scientific careers. Fewer than 20% of American undergraduates are earning degrees in science and engineering, compared with more than 50% in China.9 But the problems begin even earlier than that: America's ninth-graders are 18th in the world in science education and 95% of urban high schools report problems recruiting qualified science teachers.10

Alarmingly, the effects of significant decreases in funding for biomedical research are coming at a time of escalating threats to human health. The prevalence of chronic diseases such as heart disease, cancer, and diabetes is increasing at an alarming rate, and over 32 new deadly infectious diseases including AIDS, now a global pandemic, have emerged worldwide since the 1970s. Moreover, living in an interconnected global society in which two million people cross national borders each day, infectious illnesses such as avian flu, SARS, and West Nile virus and the threat of bioterrorism are just a jet plane away. In fact, the recent controversy surrounding the globe-trotting American patient infected with drug-resistant tuberculosis dramatically highlights not only the vulnerabilities in the public health and national security systems of the United States, but also underscores the urgent need for greater research investments on diseases that may seem to be worlds away.

While many Americans feel uninformed about the views of their elected officials on scientific, medical, and health research, most seem to understand the importance of providing necessary funds for medical studies. A poll conducted by Research!America in February 2007 found that the vast majority of people in the United States believe that science is very important to our health (86%) and competitiveness (78%) as a nation.11 Sixty-nine percent of Americans believe that scientific research is critical to our economy, 97% of Americans think it is important for the United States to be a global leader in scientific research, and 91% believe that it is essential in eliminating diseases, such as cancer.12 It is not surprising, then, that 83% of those polled in a 2006 survey indicated that they were more likely to vote for a candidate who supported increased funding "to find cures for and to prevent disease".13

Many of the 2008 U.S. Presidential candidates have begun to describe their plans for lowering health care costs, covering America's estimated 45-47 million uninsured, and improving the quality of medical care. Yet many of these leaders are not talking enough about health and medicine's field of dreams -- scientific research -- from which we harvest new findings about the causes, treatment and prevention of disease. This article provides a side-by-side comparison of the 2008 U.S. Presidential candidates' views and proposed initiatives for strengthening medical research. Information was gathered from their speeches, press statements, news articles, and websites.** For those candidates currently holding elected office, past and present initiatives they have supported (since declaring their intentions to run for President of the United States) were considered in the compilation. Much of the information is presented in the candidates' own words. As a cursory overview will reveal, many of the Presidential candidates have yet to provide detailed information about how they would incorporate biomedical, behavioral, epidemiologic, and health outcomes research into their health care plans nor have they articulated specific proposals for combating diseases like AIDS and cancer. In order to successfully write a prescription to improve health of people in the United States and worldwide, it is imperative that the next President make scientific and medical research a top priority.

*Susan J. Blumenthal, M.D., M.P.A., served as Assistant Surgeon General of the United States and Deputy Assistant Secretary for Health in the U.S. Department of Health and Human Services. She is a Clinical Professor at Georgetown and Tufts University Schools of Medicine and Distinguished Advisor for Health and Medicine at the Center for the Study of the Presidency (CSP) in Washington D.C.

Michelle Treseler, a recent honors graduate of the College of William and Mary, served as Special Assistant to Dr. Blumenthal at the Center for the Study of the Presidency. Jessica Rubin, a junior at Yale University, Jefferson Lin, a senior at Williams College, David Mattos, a junior at Harvard University, and Elise Schlissel, a junior at Princeton University are health policy interns at CSP.

**A comprehensive review was undertaken of the candidates' campaign websites as well as information readily available on the Internet about their plans for scientific and medical research. Readers are encouraged to visit the candidates' websites listed above for more information and updates on the specifics of their health care proposals. 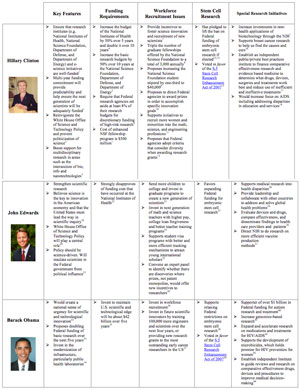 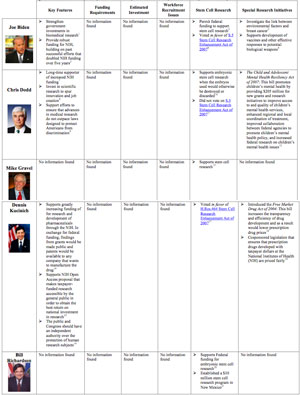 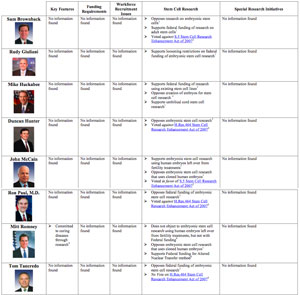 Comparison of the U.S. Presidential candidates' proposals for incorporating information technology into their health care plans: