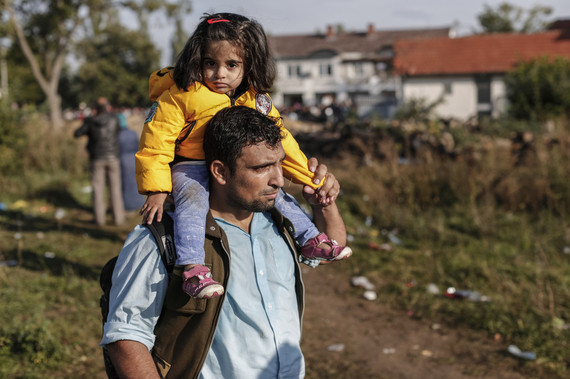 After fleeing Syria with his children, traveling in overcrowded trucks and sleeping in forests, a man named Khaled told my colleagues in Serbia why he and his family are making this desperate journey. "You can get used to war, but when you lose your hope you have to leave," he said. "When you lose hope, you lose everything."

It's hard to blame Syrians for losing hope. Many countries are doing more to supply arms than humanitarian assistance, as the civil war grinds on. The humanitarian response is completely inadequate, and the Obama administration is failing to help lead the world to a peaceful resolution.

Oxfam has analyzed what countries should be doing to help fund the humanitarian response in Syria, and how many Syrian asylum seekers they should be accepting in their countries in our new report, Solidarity with Syrians. It assesses the actions of wealthy countries, including the United States, to live up to their responsibility to provide humanitarian aid in Syria and nearby countries, and resettlement opportunities to Syrians who have fled the conflict.

Starting with the US, our government has devoted a significant amount of money to the crisis; in relation to the size of our economy, we estimated we have devoted 72 percent of our fair share to the humanitarian response. In regard to accepting refugees, our record is less impressive: Over the last 12 months, the US only resettled1,682 Syrian refugees, far short of what the US is capable of doing.

We're not the only laggards in Syria: Qatar and Saudi Arabia, both responsible for arms transfers that increasingly feed the conflict in Syria, have only provided 17 and 6 percent of their fair share of humanitarian assistance, respectively, and are resettling very few if any refugees. Russia is now spending one percent of its fair share. Jordan, on the other hand, is hosting hundreds of thousands of Syrians, and spending $870 million a year on the Syria refugee crisis, which we estimate represents 5,622 percent of its fair share.

More than 4 million refugees from Syria are residing in overstretched neighboring countries. The US recently committed to accept 10,000 Syrian refugees, but to pull our weight, our government needs to resettle 10 times that: 100,000 Syrians out of a total of 200,000 refugees should be resettled in the next year.

This may seem a big number, and we are proposing it at a time of legitimate security concerns.. But we have systems in place to resettle refugees safely, so security cannot be an excuse for inaction. Leadership from the Obama administration, and adequate funding from Congress to staff existing vetting processes, could lead to thousands of Syrians receiving desperately needed refuge.

The US and other countries need to prioritize the most acutely vulnerable people such as children and their mothers lacking family support, survivors of torture, and people with serious medical conditions. We estimate that 10 percent of the Syrians outside the country are in this acutely vulnerable category, so a couple thousand won't cut it.

The US government must also lead others to bridge the gap in funding to assist Syrian refugees so they are not compelled to undertake the dangerous flight to Europe - or even worse, return to Syria. Last summer, UN agencies helping Syrian refugees in Jordan and Lebanon cut the value of the food vouchers they were giving some refugees (those living outside camps) by half. The World Food Programme is now announcing food assistance for the Syria crisis will have to be cut further: by up to 40 percent in October and 60 percent in November, when needs will increase further due to the winter.

The prospect of a cold winter is also adding urgency to the situation. Oxfam is organizing a project to supply clean water and sanitation and other help for refugees in Serbia near the borders with Macedonia, Croatia, and Bulgaria.

The US has a long history of taking in refugees in times of great need and of being a leader on humanitarian funding. It should not shirk from its historical role in stepping up to help refugees during these extraordinary times. People like Khaled and his family, attempting to move west from Serbia, have a basic right to live in a safe place. "Syrians are bleeding, they're dying," he says. "We pray to God that you can do something to help, for our human rights."