Alex Morgan delivered a stunning game-winning goal in the waning moments of extra time to deliver the United States a berth in the gold medal match in the Olympic women's soccer tournament.

In a stadium dubbed the "Theater of Dreams," the women's national teams from the United States and Canada produced one of the most captivating contests of the Olympics. With star performances from both sides, the North American neighbors alternated goals through regulation before Morgan notched the winner just when it seemed the match would be decided at the penalty spot.

In the 123rd minute, Morgan nodded a cross from Heather O'Reilly into the back of the net to produce the first U.S. lead of the match. Having rallied from deficits all night long at Old Trafford in Manchester, the U.S. women are moving on to face Japan after a thrilling 4-3 win.

"I'm still in shock," admitted an elated Morgan during an on-field interview that aired on NBC Sports Network shortly after her goal. "I was saying the whole time, 'I don't care who scores as long as someone friggin' scores and we win.'"

Canada opened the scoring through Christine Sinclair in the 22nd minute and would take this slim edge into the intermission. The cagey first half was followed by a wide-open, see-saw second half featuring five goals, including two more by Sinclair. Deadlocked at 3-3 when the injury time following the second half was through, the teams entered extra time. Moments before the referee would likely have whistled the extra time completed, sending the game to penalty kicks, Morgan broke the tie.

"We deserved to win," Sinclair told Michele Tafoya of NBC Sports after the game.

While it's hard to argue that anyone who performed as well as 29-year-old Sinclair deserved to lose, the resiliency demonstrated by the U.S. team was every bit as impressive as her talismanic performance.

Each of Sinclair's three goals staked the Canadians to a lead. Each time the U.S. answered. Call. Response. The U.S. first pulled level in the 54th minute when Megan Rapinoe's curling, in-swinging effort on a corner kick found its way into the back of the net. Rapinoe also answered Sinclair's second goal, firing a superb, dipping strike into the back of the net in the 70th minute. After that score knotted the game, 2-2, Sinclair needed just three minutes to complete her trick. Yet again, the Americans clawed their way level. Abby Wambach struck true from the penalty spot after an unlikely indirect kick within the penalty area yielded a call for a handball inside the area.

The chain reaction that produced the penalty goal is likely to be debated -- especially north of 49th parallel -- long after the crowds have left Old Trafford and both teams have turned their attention to upcoming opponents (Canada faces France for bronze). Canadian goalkeeper Erin McLeod was called on a "6-second call" for time wasting, setting up the indirect kick.

Asked if she felt badly that the game hinged on such an unusual call, U.S. coach Pia Sundhage answered simply.

"No," she said, according to Grant Wahl of Sports Illustrated.

That Sundhage would have no sympathy will likely come as no surprise to anyone who heard the claims that Canadian coach John Herdman recently levied against the U.S. women's team. After the semifinal matchup was set, Herdman called out the Americans for using "highly illegal" tactics. Herdman went public with his claim in order to "raise awareness" of certain U.S. habits with the game officials. In the end, it was the referee's awareness of how many seconds ticked off the clock while Canada's goalie held the ball in the second half that hurt Canada.

With the Americans equalizing for the third time on Wambach's spot kick, the stage was set for Morgan's memorable extra time goal.

“You can’t put words into this experience. It’s epic,” said Wambach, via the Washington Post.

The U.S. advances to the gold medal match, aiming for its third straight Olympic gold. Standing in the way is Japan, the same team that defeated them in the final at the 2011 World Cup. Another recent classic, that match was ultimately decided by penalty kicks. Until Morgan found O'Reilly's cross amidst a crowd, it certainly looked this game would be decided by using those same, imperfect, means. 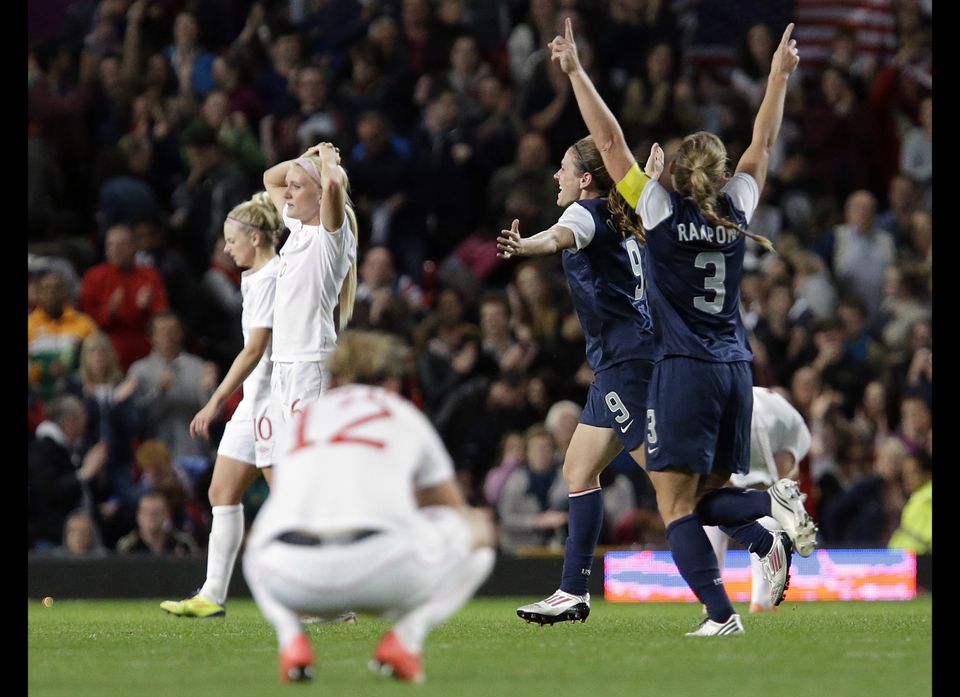