Rejoining the United States for the first time in nearly a year, the 31-year-old midfielder scored a brace and helped set up another to guide the Americans to a 6-0 victory over Guatemala in a Gold Cup warm-up game at Qualcomm Stadium on Friday.

"We're happy that Landon picked up his rhythm and is part of the group again," coach Jurgen Klinsmann said. "Goals certainly help. For any offensive player, that's the best recipe."

Herculez Gomez, Chris Wondolowski, Clarence Goodson and Alejandro Bedoya also scored for the Americans, who continued to build off three World Cup qualifying victories ahead of the Gold Cup opener against Belize on Tuesday.

Donovan was back in the U.S. starting lineup after walking away from the game for three months last winter. It had been 324 days since his last appearance, when the U.S. played Mexico on Aug. 15, 2012, and Klinsmann has already said the midfielder will have to earn his spot on next year's World Cup squad.

This was a good start.

Donovan was surely in the spotlight with every touch from the opening kick, but he wasn't the first to get the Stars and Stripes on the board.

Gomez, who plays club soccer in nearby Tijuana, ended an early stalemate when he found himself wide open to the right of the net. Jose Torres delivered a ball into the box and Gomez tapped it in past goalkeeper Ricardo Jerez for his sixth international goal.

"Herc's goal really opened things up," Donovan said. "It allowed the offense to operate with greater space. It really changed the game."

Then, it was Donovan's turn to takeover.

In the 55th minute, Donovan not only drew the penalty by falling down in the box after he felt defender Carlos Castrillo's hands on his back, but he stepped up for the spot kick and chipped the ball right down the middle as the keeper dove to the right. He became the first American to hit the half-century on his 145th cap.

Although he won't get an assist, Donovan also set up his team's third goal when he dribbled through the midfield and delivered a pass into the box that bounced off a defender's foot. Wondolowski picked up the loose rock and blasted home his first international goal.

Donovan came out with less than 20 minutes remaining in the game but he didn't leave without adding another goal to his tally, giving him 51 during his international career.

Despite being the most experienced player on the Gold Cup roster, Donovan did not captain the team against Guatemala and will not wear the armband during the regional tournament. That honor is going to Beasley, who earned his 100th career cap back in May.

Bedoya and Goodson added goals late to give the Americans a convincing win leading to Tuesday's Gold Cup opener against Belize.

"This group hasn't trained together much, so we need to adjust to each other and build chemistry," Klinsmann said. "It's not so fluid right now, and the guys know that. We'll keep working and keep training with the goal of peaking towards the end of the tournament." 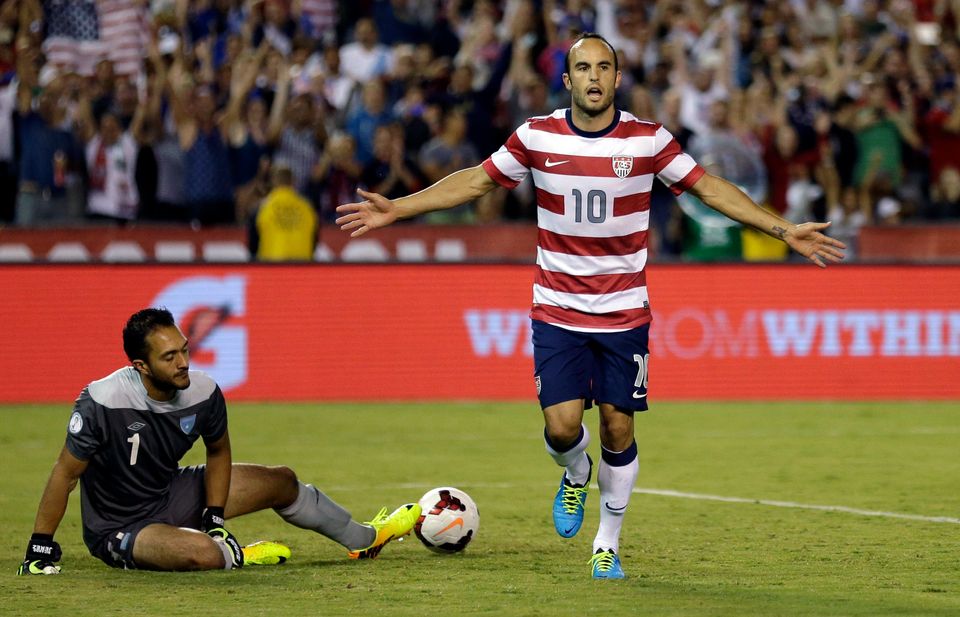 1 / 46
Landon Donovan, Ricardo Jerez
The United States' Landon Donovan, right, reacts after scoring on a penalty kick as Guatemala's goalkeeper Ricardo Jerez gets up at left in the second half during an international friendly soccer match Friday, July 5, 2013, in San Diego. (AP Photo/Gregory Bull)
AP