As a result, affiliates of the Naval Criminal Investigative Service based out of Afghanistan are now monitoring the activity of soldiers on various bases and even employing undercover agents to apprehend those who may be violating the Uniform Code of Military Justice.

According to the MarineCorps Times, soldiers stationed throughout Afghanistan are using a Craigslist site "presumably left over from the U.S. war in Iraq" to find sexual partners on multiple major bases, including Kandahar Airfield, Bagram, Camp Leatherneck/Bastion, and Forward Operating Bases Ghazni and Salerno. Though some ads specifically state that the poster is looking for a female partner, the majority of users seem to be seeking sex with other men.

The article also reports that those posting ads in the "Casual Encounters" section of the site are not only troops, but officers as well.

Under the Uniform Code of Military Justice, soliciting for sex "on community-oriented websites such as Craigslist" is not a punishable offense. However, "posting pornographic images on a public web or social media site is a chargeable offense," according to Erin Stattel, a press officer for International Security Assistance Force headquarters.

Following the release of the MarineCorp Times article, UK's conservative Daily Mail screen-capped and published a number of ads violating this aspect of the Uniform Code of Military Justice. While the images depicted are typical for sex-centered social networking sites, these type of ads are inevitably leaving soliders in hot water with the Naval Criminal Investigative Service.

(Story continues below the photo) 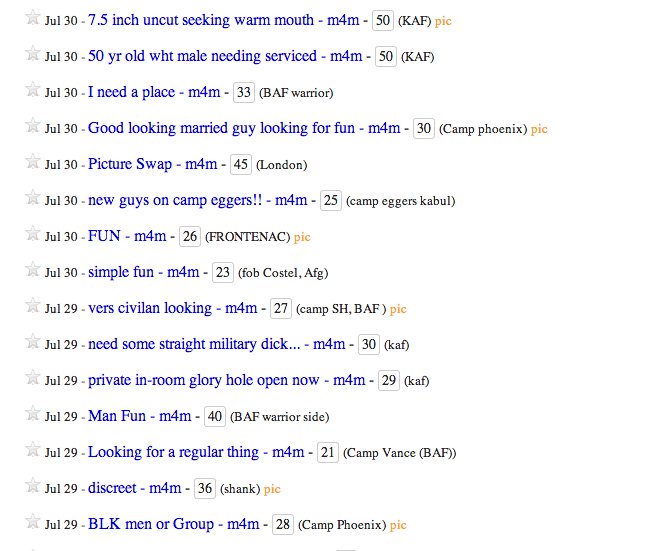 Since this story initially broke earlier this week, many users of the site have been referencing the article and offering either advice or solace to the serviceman on the site itself. One individual posted today, Aug. 1, about ways "not to be entrapped," while another said that they were "proud of you boys, and totally understand the need to release steam."

According to The Army Times, The Marine Corps and NCIS have stated that they have taken the necessary steps to ensure military personal are aware of the consequences of utilizing sites such as Craigslist for sexual encounters. “Marines are given training on their behavior online and on social media sites,” said Chris Grey, Director of Public Affairs at Army Criminal Investigation Command. “The key takeaway is that behavior online is the same as behavior on base or off base.”