By Ben Deighton and Annika Breidthardt

BRUSSELS/BERLIN, June 30 (Reuters) - The European Union has demanded that the United States explain a report in a German magazine that Washington is spying on the group, using unusually strong language to confront its closest trading partner over its alleged surveillance activities.

"We have immediately been in contact with the U.S. authorities in Washington D.C. and in Brussels and have confronted them with the press reports," the spokeswoman said.

"They have told us they are checking on the accuracy of the information released yesterday and will come back to us," she added in a statement.

Der Spiegel reported on its website on Saturday that the National Security Agency had bugged EU offices and gained access to EU internal computer networks in the latest revelation of alleged U.S. spying that has prompted outrage from EU politicians.

The magazine followed up on Sunday with a report that the U.S. secret service taps half a billion phone calls, emails and text messages in Germany in a typical month and has classed its biggest European ally as a target similar to China.

Revelations about the alleged U.S. spying programme, which became public through documents taken by fugitive former NSA contractor Edward Snowden, have raised a furore in the United States and abroad over the balance between privacy rights and national security.

The extent to which Washington's EU allies are being monitored has emerged as an issue of particular concern.

"If the media reports are correct, this brings to memory actions among enemies during the Cold War. It goes beyond any imagination that our friends in the United States view the Europeans as enemies," said German Justice Minister Sabine Leutheusser-Schnarrenberger.

"If it is true that EU representations in Brussels and Washington were indeed tapped by the American secret service, it can hardly be explained with the argument of fighting terrorism," she said in a statement.

Germans are particularly sensitive about government monitoring, having lived through the Stasi secret police in the former communist East Germany and with lingering memories of the Gestapo of Hitler's Nazi regime.

On Saturday, Martin Schulz, president of the EU Parliament and also a German, said that if the report was correct, it would have a "severe impact" on relations between the EU and the United States.

"On behalf of the European Parliament, I demand full clarification and require further information speedily from the U.S. authorities with regard to these allegations," he said in an emailed statement.

Some policymakers said talks for a free trade agreement between Washington and the EU should be put on ice until further clarification from the United States.

"Partners do not spy on each other," the European commissioner for justice and fundamental rights, Viviane Reding, said at a public event in Luxembourg on Sunday.

"We cannot negotiate over a big transatlantic market if there is the slightest doubt that our partners are carrying out spying activities on the offices of our negotiators," Reding said in comments passed on to reporters by her spokeswoman.

"The spying has taken on dimensions that I would never have thought possible from a democratic state," he told Der Spiegel.

"How should we still negotiate if we must fear that our negotiating position is being listened to beforehand?" (Writing by Annika Breidthardt; Editing by Sonya Hepinstall) 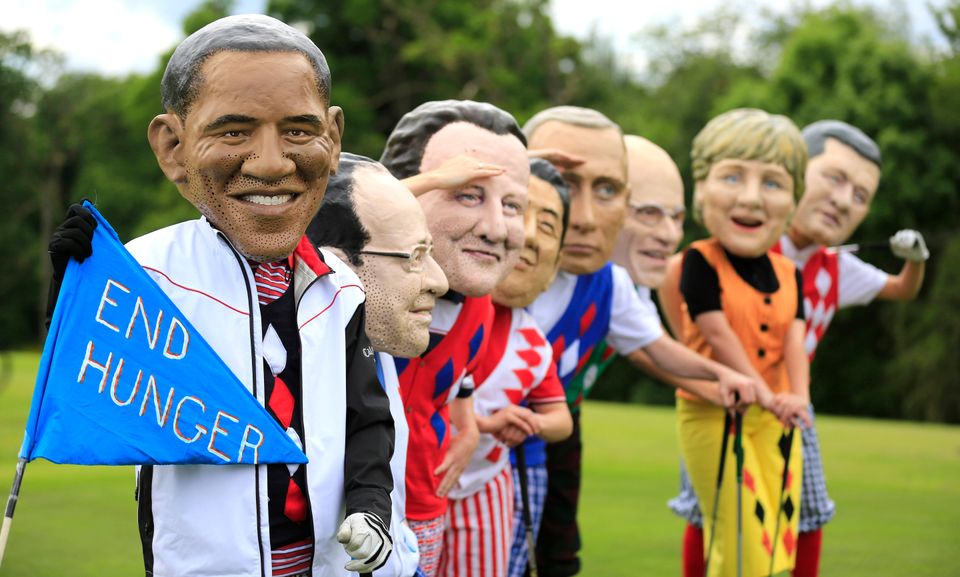 1 / 10
Members of the NGO group Oxfam, dressed in golf clothes and wearing paper mache masks, imitate G-8 leaders during a demonstration at the Enniskillen Golf course near the venue of the G-8 summit in Enniskillen, Northern Ireland, on Tuesday, June 18, 2013. The final day of the G-8 summit of wealthy nations is ending with discussions on globe-trotting corporate tax dodgers, a lunch with leaders from Africa, and suspense over whether Russia and Western leaders can avoid diplomatic fireworks over their deadlock on Syrias civil war. (AP Photo/Peter Morrison)
AP