U.S. students aren't progressing to catch up to their peers in other industrialized countries.

A report recently published by Harvard University's Program on Education Policy and Governance found that students in Latvia, Chile and Brazil are making gains in academics three times faster than American students, while those in Portugal, Hong Kong, Germany, Poland, Liechtenstein, Slovenia, Colombia and Lithuania are improving at twice the rate. Researchers estimate that gains made by students in those 11 countries equate to about two years of learning.

What gains U.S. students posted in recent years are "hardly remarkable by world standards," according to the report. Although the U.S. is not one of the nine countries that lost academic ground for the 14-year period between 1995 and 2009, more countries were improving at a rate significantly faster than that of the U.S. Researchers looked at data for 49 countries.

The study's findings echo years of rankings that show foreign students outpacing their American peers academically. Students in Shanghai who recently took international exams for the first time outscored every other school system in the world. In the same test, American students ranked 25th in math, 17th in science and 14th in reading.

A 2009 study found that U.S. students ranked 25th among 34 countries in math and science, behind nations like China, Singapore, South Korea, Hong Kong and Finland. Figures like these have groups like StudentsFirst, headed by former D.C. schools chancellor Michelle Rhee, concerned and calling for reforms to "our education system [that] can't compete with the rest of the world." (See video below.)

Just 6 percent of U.S. students performed at the advanced level on an international exam administered in 56 countries in 2006. That proportion is lower than those achieved by students in 30 other countries. American students' low performance and slow progress in math could also threaten the country's economic growth, experts have said. From the Harvard study:

Because rates of economic growth have a huge impact on the future well-being of the nation, there is a simple message: A country ignores the quality of its schools at its economic peril. Some would excuse the mediocre U.S. performance by claiming that it provides a more equal education to a much more diverse population than other countries do. It is claimed that test scores in the United States are lower than those in many other countries because they are not providing an education to all their students. That argument might have made some sense 50 or 75 years ago, but it is a seriously dated view of the world. 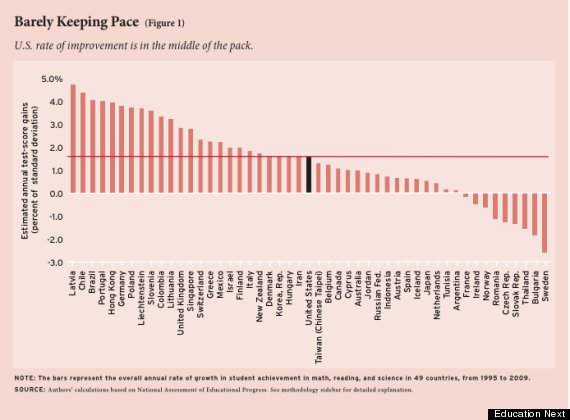 To be sure, the U.S. is not among the worst-performing developed nations, but is what researchers call "middling." Analysts also point out that U.S. scores on the 2009 international exams did generally improve over 2006.

Stateside, districts, states and the U.S. Department of Education are fighting to close large achievement gaps. The federal government has made hefty financial commitments to education in recent years, including the implementation of No Child Left Behind and the subsequent waivers from the standards-based law as well as the influx of about $89 billion in stimulus dollars to prevent teacher layoffs, keep class sizes down and avoid program cuts.

Still, the Harvard study found little correlation between increased per-pupil spending and gains in test scores. A similar analysis by 24/7 Wall St. last July yielded similar results. In 2009, the U.S. spent more than $10,000 per student, ranging from $6,356 in Utah to $18,126 in New York. Utah's high school graduation rate, however, was higher than New York's.

Schools in Maryland, Florida, Delaware and Massachusetts showed the most progress, but most states posted gains at half the rate of those in the top echelon. Researchers write that challenges faced by states in making improvements can in part be attributed to "unrealistic" goals with no clear method of achievement -- such as a declaration that the U.S. should work to top the world in math and science by 2000 -- leading to a call for "a more realistic sets of objectives for education policymakers, one that is based on experiences from within the United States itself."

"Had all students throughout the country made the same average gains as those in the four leading states, the United States would have been making progress roughly comparable to the rate of improvement in Germany and the United Kingdom, bringing the United States reasonably close to the top-performing countries in the world," the report reads.