Brazilian police stopped at least two U.S. Olympic swimmers from boarding a flight home on Wednesday to question them about inconsistencies in their accounts of being robbed at gunpoint in Rio de Janeiro, police sources said.

Federal police also want to question gold medallist Ryan Lochte, but he had already returned to the United States.

A Brazilian judge ordered police on Wednesday to seize the passports of Lochte and fellow gold medallist James Feigen so they could be questioned over their description of the robbery, which took place in the early hours of Sunday morning and also involved team mates Gunnar Bentz and Jack Conger.

Lochte, 32, one of swimming’s most decorated Olympians, had flown home already on Monday, a police spokesman said. The other three men were stopped by police at Rio’s international airport on Wednesday evening, one police source said.

A spokesman for the U.S. Olympic Committee (USOC) confirmed that Bentz and Conger were pulled from their flight.

“We can confirm that Jack Conger and Gunnar Bentz were removed from their flight to the United States by Brazilian authorities,” said Patrick Sandusky, USOC spokesperson.

The U.S. State Department said it was aware of the reports that the swimmers were detained, and was ready to provide all appropriate assistance.

Rio police will confiscate passports of US Olympians Gunnar Bentz & Jack Conger and likely release them.

“We are gathering further information.”

The police source said Feigen had been detained by police before he boarded the plane and was then taken for questioning along with the other two. There are no charges facing the three men, the source said.

Following the judge’s move to have Lochte and Feigen questioned over inconsistencies in their descriptions of the robbery, police discovered that Lochte had already left Brazil.

Lochte left for the United States on Monday aboard a commercial flight before the judge’s order was issued, a spokesman for federal police said.

An attorney for Lochte did not return calls for comment.

A U.S. Olympic Committee (USOC) spokesman said police had arrived at the Athletes’ Village on Wednesday and asked to meet the swimmers and collect their passports.

“The swim team moved out of the village after their competition ended, so we were not able to make the athletes available,” said USOC spokesman Patrick Sandusky, who could not confirm the swimmers’ location for security reasons.

“We will continue to cooperate with Brazilian authorities.”

A spokesman for the U.S. consulate in Rio declined to answer specific questions on the case but said parties should work with Brazilian law enforcement in the investigation.

Judicial sources said the judge would consider whether to ask Lochte to return to Brazil to give testimony or allow him to do so in the United States.

“The guy pulled out his gun, he cocked it, put it to my forehead and he said, ‘Get down,’ and I put my hands up, I was like ‘whatever’,” he told NBC. “He took our money, he took my wallet — he left my cell phone, he left my credentials.”

He said the swimmers had $400 stolen.

Lochte slightly altered his story in a phone conversation with NBC’s Matt Lauer on Wednesday night. Lochte initially said that the armed men had pulled the swimmer’s taxi over, but the Olympic champion told Lauer the cab had stopped at a gas station when the robbers approached them. Lochte also clarified that one of the men did not put a gun to his head, as Lochte had first said.

"I wouldn't make up a story like this..we're victims in this, and we're happy that we're safe" @MLauer says @RyanLochte told him via phone

Police sources have told Reuters in recent days they have been unable to find the taxi driver or to corroborate any testimony provided by the swimmers.

On Wednesday, police issued an appeal for the taxi driver to come forward.

The judicial sources said the judge in her ruling pointed to an inconsistency between Lochte, who had said only one man was involved in the robbery, and his team mate, who testified that several men had robbed them.

The judge also noted that video footage of the swimmers showed them returning to the Athletes Village physically well and joking with one another, and in possession of many of their belongings, including cellular phones and Olympic accreditation.

She also noted that some of the swimmers said they left a party at the French Olympic delegation just after 4 a.m. but security cameras showed them arriving at the Athletes Village at around 7 a.m. - a journey that would normally only take around 30 minutes at that hour of day.

O Globo newspaper reported that authorities had requested a search warrant for the swimmers’ accommodation, with the aim of finding Feigen’s cellphone in order to identify exactly where the swimmers were on Sunday night.

On his official Twitter account, Lochte said: “My hair is going back to its normal color tomorrow”, in what appeared to be a tongue-in-cheek reference to changing his appearance. The swimmer competed in Rio with his hair dyed peroxide blond.

U.S. Swimmers Pulled From Flights In Rio After Robbery Accusations
Synchronized Swimming At The Rio Olympics 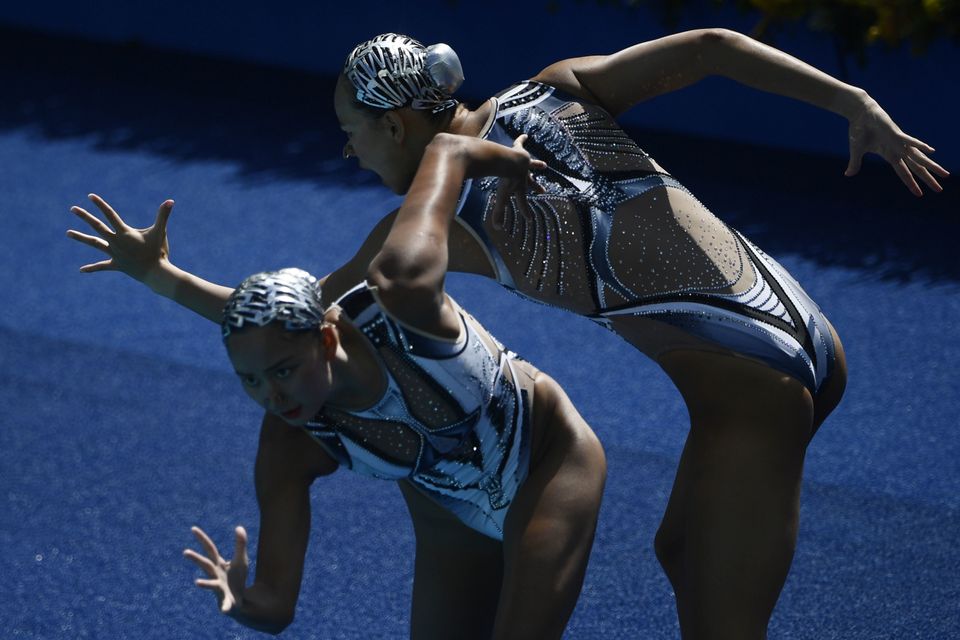