Report Summary:
While the U.S. as a whole has seen a warming trend that has raised annual average temperatures by 1.3°F over the past 100 years, warming varies seasonally, and it’s winter that has seen the fastest warming.

An analysis of data from the U.S. Historical Climatology Network of weather stations shows that the coldest states are warming the fastest, and across the country winter warming since 1970 has been more than fourand-a-half times faster per decade than over the past 100 years. Winter nights across the country have warmed about 30 percent faster than nights over the whole year. Some states cooled or failed to join the warming trend over the past 100 years, but since 1970, every state has shown winter-warming.

To better understand winter warming patterns we analyzed average-daily temperatures and overnight-low temperatures for December through February for the continental 48 states from 1912-2012 and 1970-2012. 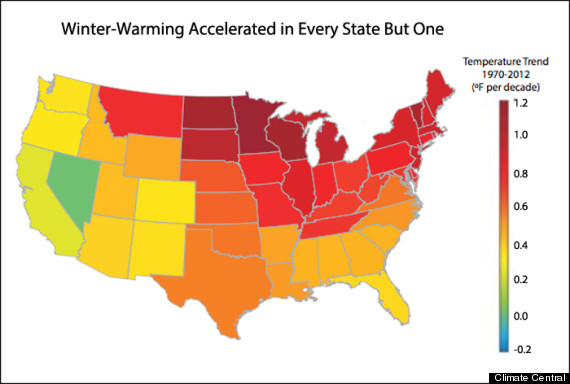 We found:
Download
Calling all HuffPost superfans!
Sign up for membership to become a founding member and help shape HuffPost's next chapter
Join HuffPost