In commemoration of Earth Day, 2013, Climate Central has created an interactive graphic that shows a state-by-state analysis of temperature trends since the first Earth Day took place in 1970. That occasion marked a significant change in America’s environmental consciousness, and led to the creation of, among other things, the Environmental Protection Agency and passage of the Clean Air and Clean Water Acts.

The year 1970 marked an environmental milestone of another sort. Overall, temperatures in the continental U.S. had been rising gradually since the early 20th century. That parallels an increase in global temperatures, which scientists think is largely the result of human greenhouse-gas emissions. The increase was so subtle that neither scientists nor environmentalists had taken much notice, and in the U.S, some states had shown no warming at all. But starting in 1970, the increase in temperature began to accelerate. Every state’s annual average temperature has risen significantly since then, at an average rate of .435°F per decade — about triple the national average of 0.127°F over the years 1910-2012.

Those are the averages, but state-by-state differences remain. The fastest-warming states — Arizona, Michigan, New Jersey and Minnesota — have warmed by about 3°F over the past 43 years, or about .7°F per decade; about twice as fast as Earth as a whole. The slowest-warming states — Washington, Oregon, Alabama and Georgia, with an increase of about .35° per decade — are more or less keeping pace with the global average.

On a larger scale, regions such as the Pacific coast and the Southeast are warming more slowly, while the Northeast and North Central states are warming faster. Of the 48 contiguous states, 30 have warmed by more than 2°F since 1970, and 17 have warmed by 2.5°F or more.

For detained information on individual states, click on any state in the interactive graphic above.

As for why the warming accelerated starting in 1970, Earth Day may be part of the explanation there as well. Global temperatures have been rising overall since the turn of the 20th century, but there was a period during the middle of the century when the warming seemed to pause.

Many climate scientists believe the pause may have happened in part because rapid industrialization during and after World War II put a lot of pollution into the air, including tiny particles known as aerosols. Those had the effect of reflecting some sunlight back into space — the same phenomenon that happens when a major volcano like Pinatubo or Krakatoa erupts, sending natural particles into the air.

With less sunlight reaching Earth’s surface, the planet cools off temporarily, or at least puts warming on hold. When the U.S. and Europe began cleaning air pollution in a serious way in the early 1970s, human-generated aerosols began to clear as well — and with them, the effects of heat-trapping carbon dioxide and other greenhouse gases became obvious. It can't all be put down to human influences, climate scientists emphasize. In addition to these warming and cooling trends, natural climate variability can also slow or speed the impact of aerosols and greenhouse gases. 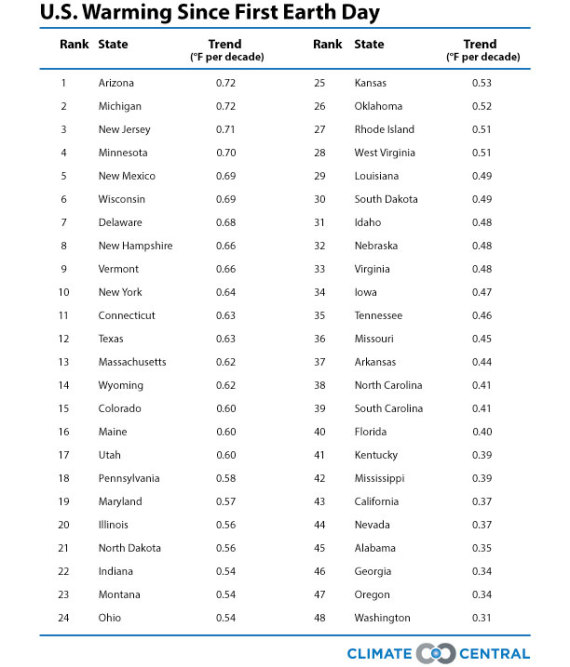