Warmer and drier conditions in coming decades will likely cause the burned area from wildfires in the U.S. to double in size by 2050, according to new research based on satellite observations and computer modeling experiments. The research, which was first presented at the annual meeting of the American Geophysical Union in San Francisco on Dec. 4, provides insight into both recent wildfire trends and the sharp increase in dryness — and therefore wildfire susceptibility — in certain regions of the country.

The 2012 U.S. wildfire season was one of the worst on record, with massive fires affecting Colorado and New Mexico, in particular. The new research suggests that high wildfire years, such as 2012, would likely occur 2-to-4 times per decade by 2050, rather than once per decade as they do now. 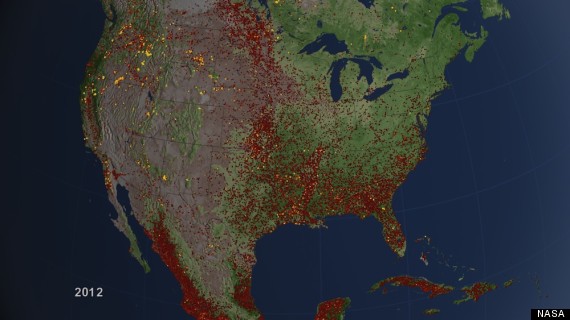 A visualization of cumulative fires from Jan. 1 through Oct. 31, 2012, detected by the MODIS instrument on board the Terra and Aqua satellites. Bright yellow shows areas that are more intense and have a larger area that is actively burning, flaming and/or smoldering. Click to enlarge the image. Credit: NASA.

In addition, the research shows that the midsection of the country — from Texas to North Dakota — is likely to become drier as the climate continues to warm in response to manmade emissions of greenhouse gases, such as carbon dioxide. That drying will significantly increase the amount of burned area in this zone, said Doug Morton of NASA’s Goddard Space Flight Center in Greenbelt, Md. Morton said other regions of the country, including the West, will likely see a continued increase in burned area as well.

The research findings are consistent with other recent reports, including work done by Climate Central scientists, showing that Western wildfires are already much larger than they were as recently as in the 1970s. In land managed by the U.S. Forest Service, there were nearly five times more fires larger than 25,000 acres each year in the past decade compared to the 1970s.

The NASA study used a burned area dataset that was derived from three satellites: Landsat and the MODIS imagers aboard the agency’s Terra and Aqua satellites. The study used that satellite information to develop a time series of burned area, focusing on the relationship between wildfires and climate conditions during the past 25 years. The researchers then used eight climate models built for the U.N. Intergovernmental Panel on Climate Change’s upcoming Fifth Assessment Report, which is due out beginning in 2013, to determine how changes in dryness may alter wildfire ignitions and burned area.

“What our analysis shows is that for the major U.S. burning regions . . . we see a strong increase in the risk of fire by mid-century based on looking at this projection of the dryness of the climate. And that translates to about a doubling of the projected burned area,” Morton said in an interview.

Through August of this year, the U.S. burned area was greater than 6.17 million acres, according to a satellite-derived fire database that provides estimates of burned area. That was not enough to set a record, but it exceeded the area burned during 12 of the 15 years since record-keeping began in 1997.

The satellite data differs from numbers maintained by the U.S. National Interagency Fire Center (NIFC), which shows that fires torched 9.2 million acres of forest, brushland and grassland across the nation through November, the most recent month for which numbers are available. That’s the second-largest area burned since the NIFC began keeping records in 2000 (the worst was 2006), and nearly 50 percent more than the 10-year average over the first decade of this century.

The West, along with much of the rest of the country, was mired in drought for much of the year, which contributed to that region's particularly severe wildfire season.

“When you have reduced rainfall and less snowpack, you dry out that whole Western U.S. much more quickly than you do in other fire years. It gives you a longer time period to burn and it sets up those ecosystems to be more flammable whether you get ignitions from human sources, which are quite common, or from natural sources. So it’s possible just by lengthening the fire season, you get more burned area,” Morton said.

While wildfires are influenced by climate conditions, they also contribute to climate change as well, since fires burn biomass and emit large quantities of carbon dioxide into the atmosphere, further warming the climate.

“With the climate change forecast for this region, this trend likely will continue as the Western U.S. gets warmer and drier on average,” said Chris Williams of Clark University, in a press release. “If this comes to pass, we can anticipate increased fire severity and an even greater area burned annually, causing a further rise in the release of carbon dioxide.”

There are opportunities to limit the uptick in fire-related emissions, the researchers found. By reducing the number of prescribed burns and agricultural fires, land managers may be able to reduce the amount of carbon emissions from fires, despite the increase in large non-prescribed wildfires. About 70 percent of active fire detections in the U.S. each year are due to agricultural fires and land-management activities.