The U.S. Women’s National Soccer Team drew 0-0 against the Korea Republic (South Korea) in its final game Saturday before they depart this week for Canada and the 2015 FIFA Women’s World Cup.

However, there was a much more important number from the evening: 26,467.

Twenty-six thousand, four hundred and sixty-seven was the official attendance number of the sold-out crowd at the Red Bull Arena in Harrison, New Jersey, with many of the fans donning red, white and blue and chanting the names of players: Alex Morgan, Abby Wambach, Hope Solo and Sydney Leroux.

It’s stark reminder of just how far women’s soccer has come in America since the women's last World Cup send-off game in 2011 against Mexico, also played in Red Bull Arena.

Saturday’s match wasn't an anomaly. The sport has been growing with record attendance numbers for the national team. It's enjoyed sold-out crowds for its two previous games, and 35,817 witnessed the U.S. Women's 4-0 victory over New Zealand at Busch Stadium in St. Louis, Missouri, on April 4, a record number in the team’s history.

For the players, this year’s World Cup is an opportunity to take the momentum that largely started with the legendary 1999 World Cup-winning team and solidify the presence of women’s soccer in the U.S. permanently, with hopes that the enthusiasm may extend long-term to the professional and youth levels.

“We don’t want to go through our group stage and get to Game 4 and Game 5 and lose, because that means what these fans have done for the last four years, and following us, and building the game and building women’s soccer -- it’ll be all for nothing,” team captain Abby Wambach told The Huffington Post.

”So I want to give these fans something to cheer about and continually cheer about," she added.

Wambach, who joined the national team in 2001, has won three Olympic gold medals and taken over as the the face of women’s soccer for her generation. She's topped, and since long passed, Mia Hamm’s once-held record of 158 goals, netting 182 (and counting) of her own so far.

And while Hamm jerseys may have been aplenty following the team’s historic 1999 championship and in the many years since, on Saturday it was Wambach, Morgan and Leroux's names on the backs of jerseys worn by girls, many of whom weren’t even born when former USWNT player Brandi Chastain made what has become the most iconic goal in U.S. women's soccer history, beating China 5-4 in a penalty shootout.

There for every step of the sport’s transformation has been Christie Rampone, 40, the lone player still on the squad from the 1999 team. Rampone will become only the fourth player to compete in five Women’s World Cups, and has the “most caps of any active player in the world and second most in soccer history” with 305, according to MLS Soccer.

Rampone acknowledged that players like Hamm, Chastain and Julie Foudy “paved the way,” adding that “they’re not forgotten.” She echoed Wambach on how critical the World Cup will be in continued success of women’s soccer. 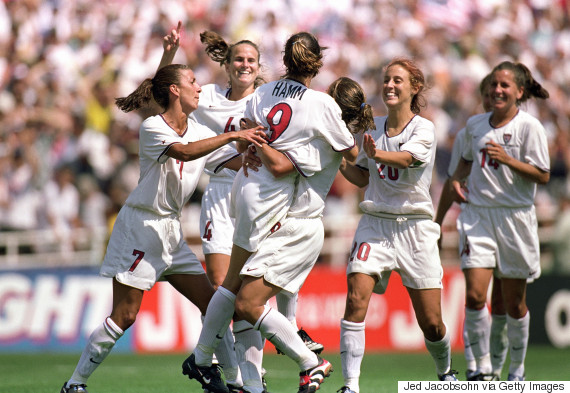 “I want to leave this sport in a better place than I found it,” Rampone said. “And that’s the goal: to keep pushing and have these young kids to aspire to not only have the U.S. to look up to, but now they have a professional league, and there’s more opportunity for girls to go further past college."

Both women urged fans to tune into the tournament, which begins June 6 in Canada (the U.S.’s first group match is on June 8 against Australia), and hope the time zone will make it easier for viewers.

Rampone agreed that the 1999 team really resonated with fans, adding that “we had a little bumps in the way, where I think attendance started to drop.”

She believes women’s soccer, however, is “heading in the right direction.”

All this shows a vastly different landscape for women’s soccer in the U.S. -- and the roaring crowds at Red Bull Arena (with a noticeably higher pitch than most soccer matches) emphasized that point ahead of Canada. But for the women, they’ve hardly reached the finish line.

Alex Morgan celebrates after scoring a goal during a 2012 Olympics match. (Getty)

“We could do something really special with this World Cup, and if we win it, it’ll be a major turning point in women’s soccer,” said midfielder Carli Lloyd as groups of young girls screamed her name from the stands.

And one group of girls, just in kindergarten when the U.S. women’s team won in 1999, said they are heading to Canada next week, hoping to see history be made again.

“Just growing up watching them has been incredible,” Kelly Westerman, 22, said.

And whether it's from older fans of the 1999 team, or new generations aspiring to be the next Alex Morgan, Wambach said it’s the support that keeps them going.

Wambach celebrates with her team during a 2012 Olympics match.