The United States overcame a daunting two-goal deficit to force a draw against Slovenia on Friday, but the Americans may have deserved to win outright. Shortly after tying the game in the 81st minute, the U.S. had a free kick near the Slovenian goal.

Landon Donovan, who scored the first U.S. goal of the game, lobbed the ball towards the goal and teammate Maurice Edu knocked it in. A referee called the goal off, apparently because he thought the American committed a foul.

Replays suggest that the call may have been ill-advised -- and if anything, Slovenian defenders should have been flagged. Numerous observers criticized the official's decision. "Where is it? There's no offsides," one commentator said upon viewing the replay.

After the game, Donovan spoke about the referee's controversial call. "It was the guy's first World Cup game so maybe he got a little caught up in the moment," he said. Scroll down to watch. Was the call correct? 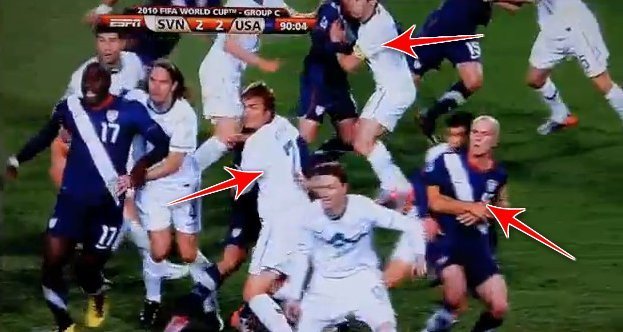 <0--2637--hh>
Download
Calling all HuffPost superfans!
Sign up for membership to become a founding member and help shape HuffPost's next chapter
Join HuffPost