The U.S.'s lone goal came in the 45th minute from Abby Wambach, who joined the starting lineup again after being relegated to the bench for the start of team's last match.

The goal marked Wambach's 14th career goal in the World Cup, tying for second all-time with Brigit Prinz of Germany, per U.S. Soccer. Marta still holds the record with 15 goals, one of which she scored during this year's tournament. It is Wambach's 183rd goal overall.

With the win, the U.S. heads into the Round of 16, at the top of their Group D with seven points, which, in addition to Nigeria, included Australia and Sweden. The U.S. beat Australia 3-1 and tied Sweden 0-0.

Australia, who came in second in the group with four points, will face Brazil on Sunday, while Sweden's future is a little less certain, according to ProSoccerTalk:

Sweden currently sits as the third-best third-place finisher. Sweden needs France to lose to Mexico or a Spain draw or loss against South Korea to move ahead.

Nigeria, with just one point, has now been eliminated from the tournament.

The U.S.'s next game will take place on Monday against the third place finisher from either Group B, E or F. The USWNT could face whoever loses the Wednesday match between Colombia and England match, if France also beats Mexico in their Wednesday match, ProSoccerTalk said. 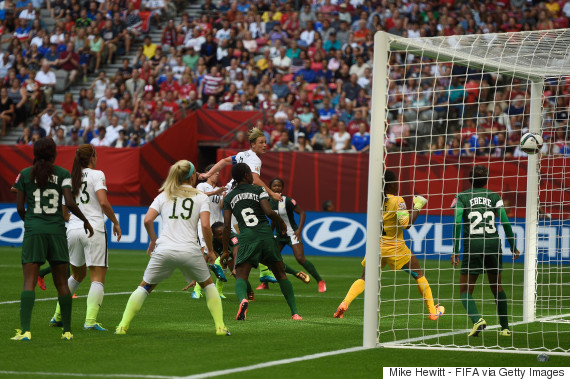