In the end, the United States men's basketball team wouldn't be denied the gold medal. But Pau Gasol and Spain's national team made sure that the traveling troupe of NBA All-Stars with USA emblazoned across its jerseys had to sweat it out until the very, very end.

In a taut, physical affair that evoked the thriller played between these two teams in 2008, USA basketball held off Spain, 107-100, to capture the gold medal at the London 2012 Olympics.

With Spain having closed within six points deep into the fourth quarter, LeBron James reeled off five straight points on a three-point shot and a driving right-handed slam dunk to propel the U.S. to victory and its second straight gold medal.

"This is all about USA. It's not about me," James told Craig Sager of NBC shortly after the final buzzer. "It's about the three letters on our chest."

During the first half of the gold medal game, it seemed like the post-game talk would be all about Spanish guard Juan-Carlos Navarro, who lit up the scoreboard and the United States perimeter defense with 19 points before the intermission on 4-for-6 shooting from behind the three-point line. Despite Navarro's unexpected three-point barrage, the United States held a slim 59-58 lead, thanks largely to the 17 points poured in by Kevin Durant over those first two quarters.

In the third quarter, Pau Gasol exploited the one known weakness of the U.S. team: lack of interior size and front court depth. With his younger brother tethered to the Spain bench with four fouls, the Los Angeles Lakers' star dominated, flashing his deft touch on his silky, sweeping shot and exploiting his size advantage under the rim. The 32-year-old Spaniard scored his team's first 15 points after halftime, single-handedly staking Spain to a 71-70 lead when he completed an old-fashioned three-point play with just more than five minutes remaining in the quarter.

"We were close," Pau said after accepting his silver medal. "But you almost have to play the perfect game to beat them."

The elder Gasol's one-man demolition of the America defense seemed to inspire his Lakers' teammate, Kobe Bryant, who put up seven of his 17 points during the third. With Bryant and Durant carrying the load, the U.S. men retook the lead, 83-82, by the end of the third. In a fourth quarter featuring more tense moments than the Dream Team likely had in total in Barcelona (not counting any of Charles Barkley's nocturnal ramblings on Las Ramblas), Spain seemed to get yet another bucket from a member of the Gasol family or be gifted possession via turnover whenever Chris Paul, Durant or James seemed to have knocked down the bucket that would finally knock down Spain.

With Spain still lurking in the rearview at 97-91 and needing to sub out a hobbled Carmelo Anthony, U.S. coach Mike Krzyzewski did something that Chuck Daly never had to do while helming the Dreamers in 1992. Coach K called timeout with 3:20 remaining on the clock. The Duke coach swapped in James for Anthony, sending the Heat star out on the court with Paul, Durant, Bryant and Kevin Love to carry the team to gold.

James' dunk and three-point makes in quick succession bookended a two-point bucket by Marc Gasol, extending the U.S. lead to 102-93. Following a Spain timeout, Paul crossed up his overmatched defender and hit a layup just before the shot clock expired. The exuberant, leaping reaction by Krzyzewski let everyone know just how important that particular score had been. With the U.S. lead pushed back to nine points in the final minute, all that stood between the U.S. team and another gold medal was several James Harden free throws. The bearded Thunder star obliged and the celebration -- one that included Wenlock -- was on. 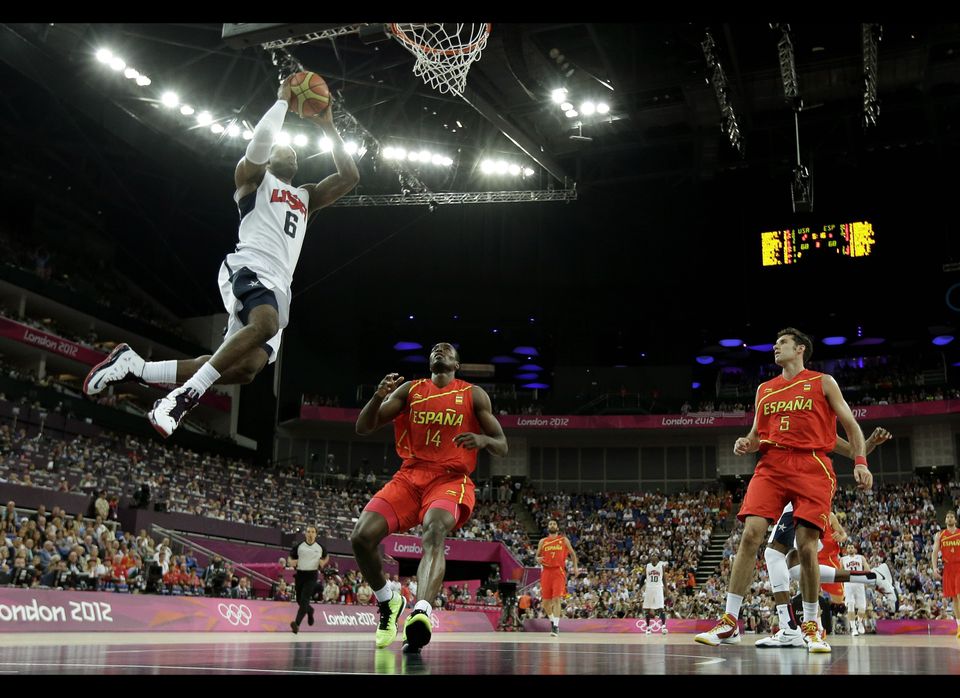 1 / 60
Gold Medal Match
United States' LeBron James goes up for a dunk during a men's gold medal basketball game against Spain at the 2012 Summer Olympics, Sunday, Aug. 12, 2012, in London.
AP